Thomas McCann was a native of Brooklyn, NY and was born on September 1, 1891. One of the pioneers at Hawthorne (Maryknoll’s first home) and later at Maryknoll, Brother Thomas was the first Auxiliary of St. Michael to be received into final membership. Though delicate in health, he was from the beginning one of Maryknoll’s most valuable men.

In his youth, he worked for the New York Tribune and later for Monsignor Freri, National Director of the Society for the Propagation of the Faith. Thomas felt drawn to serve the foreign missions and, while engaged in work with Monsignor Freri, he decided to give his life to the advancement of the missions. The founding of Maryknoll offered him the opportunity to fulfill that call. 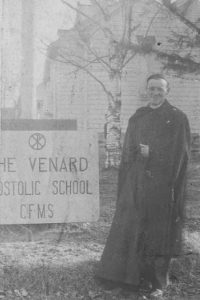 Central to his mission vocation was prayer and absolute trust in God that this new mission Maryknoll was beginning was God’s work, and that Maryknoll’s members were to be instruments of God’s plan for the Society. Thomas had faith, confidence, and a deep love of God to follow his missionary call. He accompanied Father Price in the work of making the infant Society known in the Eastern states, especially in the Scranton area, for several years.

When the young Society opened a house in San Francisco, the experienced and dependable Brother Thomas was assigned there. He made an important contribution to the Society by his friendliness and hard work in the promotional field. He regretted that his frail health prevented him from going into the missions but it did not dampen his enthusiasm for the Society, nor did it make him conserve his energy in raising funds to support the seminarians who were increasing in numbers.

He continued his post until illness made it necessary to transfer him to Monrovia, California, where he died March 7, 1922. Funeral and burial took place in Los Angeles.