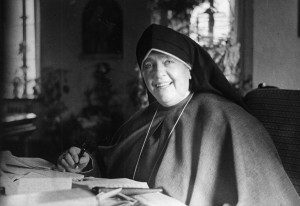 Mary Josephine “Mollie” Rogers was born on October 27, 1882 in Roxbury, Massachusetts to Abraham T. Rogers and Mary Josephine Plummer, both of Boston. Mollie was the fourth child and first daughter in a family of eight, five boys and three girls.

Mollie attended West Roxbury High School (Boston, MA), graduating as the valedictorian in 1901. She then went on to attend Smith College in Northampton, MA where she specialized in zoology, graduating in 1905. She also spent a year at Boston Normal School in a special section for college graduates and received a teaching certificate. After graduation, she accepted a fellowship in Smith’s Zoology Department.  She later taught in Boston public schools, at both elementary and high school levels. 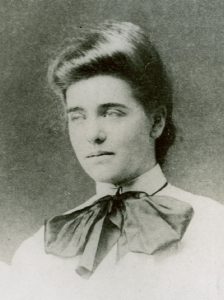 While working at Smith College, Mollie organized a small Catholic mission club. Seeking advice for organizing the club, she began corresponding with Father James A. Walsh, the then Director of the Society of the Propagation of the Faith in Boston.  Soon thereafter, she met with Fr. Walsh in person and began volunteering at the Society’s office.  From 1908 until 1912 she devoted all her spare time to assisting Father Walsh in the work of mission education – editing, translating and writing for The Field Afar, a mission magazine begun by Father Walsh in 1907, and organizing his mission photo collection.

In 1911 Father Walsh and Father Thomas Frederick Price, a seasoned home missioner in North Carolina, were commissioned by the Bishops of the United States to begin a seminary to train American young men for the foreign missions, and later that year they went to New York and founded The Catholic Foreign Mission Society of America, more commonly known as the Maryknoll Fathers and Brothers.

Mollie was not able to go with the first small group of three women, known as the “Secretaries,” who offered their services to the young organization, but in September 1912, when the family obligations which prevented her leaving Boston had been satisfied, she joined them in their temporary home in Hawthorne, New York. 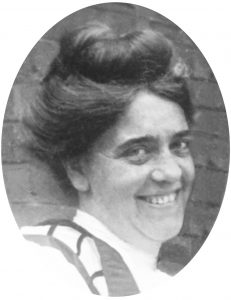 Mollie was chosen by Father Walsh and the Secretaries to direct the women’s group under Father Walsh’s guidance. She continued in that capacity until 1920 when the group, then numbering thirty-five, was recognized as a Diocesan Religious Congregation – The Foreign Mission Sisters of St. Dominic, generally called the Maryknoll Sisters. At the first General Chapter in 1925, she was elected Mother General. Mother Mary Joseph (her religious name) was re-elected to that office at subsequent General Chapters until her retirement in 1946 at the age of 64. At that time the Congregation numbered 733 and the Sisters were working in Asia (China, Japan, Korea, the Philippines) and in Latin America (Panama, Bolivia, Nicaragua) as well as with minority groups in the United States. The reverence and esteem for Mother Mary Joseph extended far beyond the community she founded as is evidenced by the honorary degrees which were bestowed on her – Doctor of Laws by Regis College in Boston in 1945 and Trinity College in Washington D.C. in 1949 and Doctor of Letters from her alma mater, Smith College, in 1950. 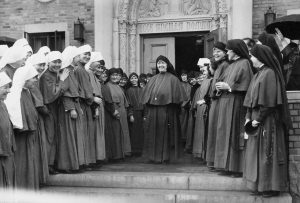 Mollie’s Legacy of Love – An Informal Biography on Mother Mary Joseph Rogers and a Brief History of the Maryknoll Sisters during her Lifetime by Sr. Theresa Baldini, MM & Sr. Madeline McHugh, MM (2014)

To the Uttermost Parts of the Earth: The Spirit & Charism of Mary Josephine by Sr. Camilla Kennedy, MM (1987)