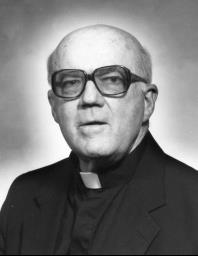 Charles A. Murray was born on May 18, 1922 in New Bedford, Massachusetts, son of Charles A. Murray and Mary E. Boyle Murray.  His only sibling, Edward, is deceased.  His father was a postman who had emigrated from England and became an American citizen in France during WWI.  Mr. Murray was wounded in action and later received the Purple Heart.  Father Murray’s early education took place in the public school system of New Bedford, graduating from New Bedford High School in June 1940.  He then took courses at Kinyon’s Business School in New Bedford and later at Boston University’s Evening College of Business Administration, while working as a clerk-typist in Boston.

During his college years he felt called to the priesthood and more specifically to the foreign missions.  He thought of Maryknoll’s Bishop Donaghy from his parish, who had given a talk in his high school about China, and so he applied to Maryknoll and was accepted for the seminary.  Their paths never crossed until 1988, when they met at Maryknoll, New York.

He entered Maryknoll on July 31, 1942 at Maryknoll Junior Seminary, Clarks Summit, Pennsylvania.  He received his Bachelor of Arts degree in Philosophy at Maryknoll Seminary on June 15, 1950 and was ordained a priest on June 9, 1951.

Upon ordination Father Murray was assigned to the Peru Region and after finishing language school in Arequipa, Peru, was assigned to teach Latin and other subjects at San Ambrosio High School and Seminary in the small city of Puno in the altiplano.  In 1953 he was assigned as assistant pastor of Our Lady of the Assumption parish in the nearby provincial town of Azangaro.  It was a very active parish, the fruit of a long Catholic tradition, and the cooperation of the people was superb.  In early 1958 he was assigned as an assistant pastor in San Juan parish in Puno, a larger city parish with a hospital and many schools to serve.

The following year he returned to the Azangaro parish as pastor and remained there for the next twelve years.  There were several parishes in the area without a priest, so at one time he had to serve an area about three-quarters the size of Connecticut.  This was made possible mostly through the faithful service of over 300 Indian volunteer catechists throughout the area.  Through the Cursillo and Christian Family Movements Fr. Murray promoted the lay apostolate.  High priority was also given to recruiting for the seminary and when an ordination was held in the parish church, this made quite an impact on the local people.

In 1971, Father Murray became the director of Maryknoll’s Center House in Puno and became involved in local apostolates.  Those first 21 years had been spent in the Altiplano region of the Andes at an altitude of about 12,500 feet above sea level. When Father Murray celebrated the twenty-fifth anniversary of his ordination the whole town of Azangaro turned out.  Between 1973 and 1976, he was assigned to a lower altitude at Arequipa to the parish of Our Lady of the Pilar Church, which had a parochial grammar and high school staffed by American Religious.  Between 1977 and 1984, he served in Ciudad de Dios, a large shantytown near the capital city of Lima on the Pacific coast.  There as a parish priest he became involved in the Marriage Encounter and Engaged Encounter movements for several years.

In 1984 Father Murray was recalled to the United States to work in the Maryknoll Development Department out of the New York City House.  His work included public relations, membership recruitment and fund raising for the missions.  In October of 1991 he was re-assigned to the foreign missions in Merida, Mexico to begin a new phase of his long missionary career.  In January 2008 Father Murray joined the Senior Missioner Community and moved to the Maryknoll Residence, Los Altos, California, where he lived until May 2014 when he took up residence at Mission St. Teresa’s, Maryknoll, New York.

A Rosary and wake service was held at 4:00 p.m. on May 1, 2017 at Mission St. Teresa’s.  The body was received at the Maryknoll Society Center at 9:30 a.m. on May 2, 2017.  The biography was read by Father Kevin J. Hanlon, M.M.  Mass of Christian Burial followed at 11:00 a.m. and was concelebrated in Queen of Apostles Chapel.  Father Joseph M. Everson III, M.M. was Principal Celebrant and homilist.  Burial followed in Maryknoll Society Cemetery with Father Joseph M. Everson III, M.M. conducting the graveside service.