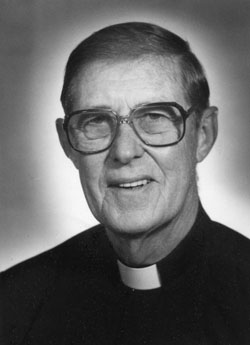 Charles Henry Cappel was born on October 4, 1917 in Norwood, Ohio, son of Joseph and Eleanor Farfsing Cappel. He had six brothers, and one of whom was Father Joseph H. Cappel, M.M., who died in Chile in 2004. He attended St. Matthew’s Parochial School and in June 1935 graduated from Purcell High School, both in Cincinnati. He entered Maryknoll Junior Seminary in Cincinnati, Ohio, September 4, 1935, and as a Maryknoll seminarian, he studied at St. Gregory’s Seminary in Cincinnati and Maryknoll Junior Seminary (Venard), Clark’s Summit, Pennsylvania. Later in 1944, he was awarded a Bachelor of Arts degree in Philosophy from St. Gregory’s Seminary. He was ordained a priest on June 11, 1944 at Maryknoll Seminary in Ossining, New York.

After ordination Father Cappel was assigned to the Maryknoll Mission in Puno, Peru. Upon his arrival in Lima, he was assigned to Latin American studies at the University of San Marcos. After studies in December 1945, he served in the Puno Colegio run by Maryknollers, as a teacher and Procurator for the whole Puno Mission. In April 1948, Father Cappel was assigned to advanced studies in Biology at Canisius College in Buffalo, New York and was also local Superior of the Buffalo Maryknoll House. In April 1949, he transferred to the University of St. Louis in Missouri and secured his Master of Science degree in Biology in 1951. In May of that same year he was appointed Vice Rector of Maryknoll Junior Seminary in Lakewood, New Jersey, where he was Professor of Biology as well as Dean of Studies.

On April 20, 1954 Father Cappel was transferred to Maryknoll College, Glen Ellyn, Illinois to teach Biology. On April 2, 1956 he began studies at the University of Illinois, Champaign and in 1960 received his Doctor of Philosophy degree in Physiology. He returned to Glen Ellyn and taught science courses. In March 1964, he was appointed Rector of the Maryknoll College where he served for four years. In July 1968, Father Cappel was appointed Rector of Maryknoll Major Seminary in Ossining and served for 3 years. On March 5, 1971, Father Cappel was assigned to assist the Director of the Office of Society Personnel and worked in that capacity for three years serving as Acting Director during his last six months. He was also placed in charge of the Chapter Secretariat for the 1972 General Chapter.

Father Cappel received a Masters Degree in Education from Iona College, New Rochelle, New York in June 1974, and at the age of 58, he was again assigned to the Maryknoll Mission Region in Peru. There he was assigned parochial work in the Huancané Parish of Santiago Apostol, in the Juli Prelature of Puno among Aymara people. He was elected 2nd Delegate for the Peru Region for the 1978 General Chapter at Maryknoll, New York. Upon his return to Peru, he was initially appointed 2nd Consultor to the Regional Superior and then a year later, 1st Consultor.

At his own request, at age 74, Father Cappel retired on February 18, 1992 with continued residence and work in Puno. He remained as a teacher at a School in Huancané. In 1995, he moved to Tacna, Peru where he was a professor of Latin at San José Seminary. In early 2000, Father moved to the Lima Society House, where he continued his pastoral ministry until early 2004 when he returned to take up residence at Maryknoll, New York and was assigned to the Retirement Community (now Senior Missioner Community). For many years, he provided services to the Library at the Society Center. In March 2012, Father Cappel moved to Mission St. Teresa’s.

A Rosary and wake service was held at 4:00 p.m. on Tuesday, September 29, 2015 at St. Teresa’s. The body was received at the Maryknoll Society Center at 9:30 a.m., Wednesday, September 30, 2015, with prayers in the Lady Chapel until 10:45 a.m.. The biography was read by Father John Keegan. Mass of Christian Burial was concelebrated in Queen of Apostles Chapel on Wednesday, September 30, 2015 at 11:00 a.m. Father Raymond Finch was Principal Celebrant and Father Leslie Blowers was homilist. Burial followed in Maryknoll Society Cemetery with Father Russell Feldmeier conducting the graveside service.