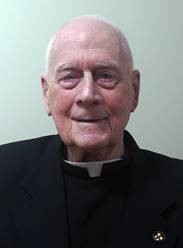 Father Clarence A. Engler died on November 6, 2021 in the Assisted Living Unit at Maryknoll, New York. He was 88 years old and a Maryknoll priest for 62 years.

Clarence Engler was born on April 23, 1933 in Hopkinton, Iowa, the third son of Ralph and Laurine Jaeger Engler. His early schooling took place at St. Paul’s primary school and St. Paul’s High in Worthington, Iowa. In 1954 he graduated from Loras College, Dubuque, Iowa, with a Bachelor of Arts Degree in Latin. After graduation he entered Mount Saint Bernard’s Seminary in Dubuque before entering Maryknoll Seminary as a Second Year Theologian in September 1955. Father Engler was ordained June 13, 1959 at Maryknoll, New York and was assigned to Taiwan.

Upon completion of his basic language studies at Taichung Language School, Father Engler was assigned to work in the Taichung Diocese as Assistant Pastor in Chushan parish and Tienchung parish. In 1964 he started a new parish in Khe-chiu and became its first pastor. Between 1965 and 1968, Taiwan began to change from an agricultural to an industrial society. The whole world, the whole Church and Maryknoll began to change. There were the Vietnam War and Vatican II, and adjustment to these realities caused much turmoil. There was also a revivification of local religions. New temples were being built; old ones repaired and refurbished. During this time Father Engler developed a deep interest in local religions. He often visited the site where a new temple was being built a few blocks away from the new parish church in Khe-chiu, to talk with the people and inquire about the local beliefs and the meaning of symbols and rites. Many of the local people were very religious and devout. Father Engler said he began to think of God in a more comprehensive way, present everywhere, in everyone, even in the hearts of “unbelievers”, drawing all things to Himself through Christ. The local religions seemed like out of the Old Testament. “In times past, God spoke in fragmentary and varied ways… in this final age, He has spoken to us through his Son.” (Heb.)

Father Engler’s next assignment was in Puli at a geographically large parish. Here he set up a kindergarten to help with self support, revamped the old church into a convent and invited two Sisters to help in the parish. After five years in Puli, he became co-pastor for the Changhwa parish where the parishioners were becoming well educated and more sophisticated. They challenged him in preparing his weekly homilies and liturgical commentaries. There were Taiwanese and Mandarin speaking Catholics. This required additional language study.

In January 1977, Father Engler was assigned to the United States Region and was appointed Assistant Director of the Mission Research and Planning Department. In September he became the Director of MRPD and served in this capacity until September 1982. After a sabbatical year in Rome, Father Engler was asked to study the Telecommunications and Informatics needs of the Society and, after finishing up his work on that project, he was reassigned to the Taiwan Region in 1985.

Father Engler returned to Taiwan and began a new parish in the Hsitun district of Taichung, a rapidly expanding part of the city. His experience in the MRPD proved invaluable in setting up a computer filing system to keep track of the itinerant Catholic population. He set up the “Maryknoll Taiwan Information Service,” a project for experimenting with innovative ways of putting modern electronic technology at the service of evangelization in the local church. He also began a Christian formation program to foster faith sharing. In October 1994 he was elected Fourth Regional Assistant for a three-year term.

In 1998, Father Engler terminated his work in Hsitun parish to take on the responsibilities of Coordinator of the Program for Training of Chinese Seminary Teachers and Formators. He continued as Coordinator until June 2000, when he returned to work full time in Taiwan directing the Maryknoll Taiwanese Language Center and Information Service.

Father Engler returned to the United States in 2014. He was assigned to the Senior Missioner Community and resided at the Society Center in Maryknoll, New York.

A Memorial Mass was held on December 1, 2021 at 11:00 a.m. in Queen of Apostles Chapel, Maryknoll, New York. Father Lawrence Lewis was Principal Celebrant and homilist. Father John Moran read the biography and Father Michael Duggan read the Oath. According to Father Engler’s wishes, his body was donated to New York Medical College. His cremains will be placed in the Columbarium at Maryknoll, New York at a future date.