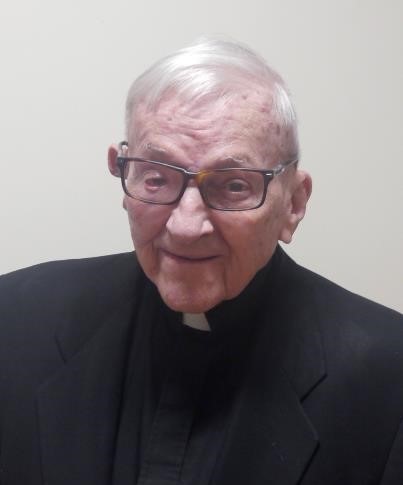 Father Donald F. Sybertz died on April 19, 2020 at the Assisted Living Center at Maryknoll, New York.  He was 91 years old and a Maryknoll priest for 64 years.

Donald Francis Sybertz was born July 23, 1928, in North Weymouth, Massachusetts, the son of Frank W. and Helen Bronder Sybertz.  He had three sisters and one brother.  He attended Bicknell Elementary School and Weymouth High School and earned a Bachelor of Arts degree in Economics from Boston College before entering Maryknoll in September 1950.

After his ordination on June 11, 1955, Father Sybertz was assigned to Maswa-Shinyanga, Tanzania, where he served in the Kilulu mission in the Plains region of northern Tanzania.  Father Sybertz built the first home there to provide shelter and care for aged persons lacking families and housing.  He was later assigned to Gula Parish, a large sprawling parish undergoing expansion geographically and numerically.  Eventually the parish was divided into several parishes, and Father Sybertz moved from Gula to Mwanahuzi and developed that Center into a separate parish.

Over the years, Father Sybertz was one of the Maryknollers most proficient in the Sukuma language.  His facility in the language, interest in the culture, and knowledge of how to inculturate Christianity among the Sukuma people led him into a continuing study of how to relate Scripture and the African wisdom sayings, stories, and parables of the people.  This study resulted in the publication of several books in Swahili as evangelization aids for the Tanzanian Church.

Father Sybertz spent his entire missionary career in Tanzania. He served as Pastor of the Mwanahuzi Catholic Church until it was turned over to a Diocesan priest.  Although Father Sybertz was given Senior Missioner Status in the Africa Region in 2001, he continued to work full time in Maryknoll’s inculturation and evangelization apostolate in Shinyanga, Tanzania.

In 2015, Father Sybertz was assigned to the Senior Missioner Community and took up residence at Maryknoll, New York. He was appointed to the Mission St. Teresa’s Prayer Partners Team in 2016.

A Memorial Mass was celebrated in Queen of Apostles Chapel on April 23, 2020. Father Michael Snyder was Celebrant, Father Daniel Ohmann was homilist, and Father Edward Davis read the biography, Scripture, and the Oath.  Burial followed in the Maryknoll Society Cemetery.