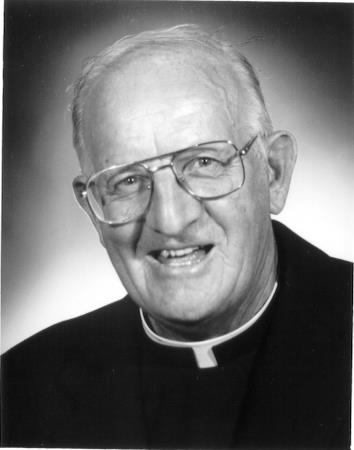 Father Eugene A. Theisen died on December 7, 2018 at Phelps Memorial Hospital, Sleepy Hollow, New York.  He was 91 years old and a Maryknoll priest for 65 years.

Eugene Anthony Theisen was born in Wadena, Minnesota on December 29, 1926, son of John F. and Elizabeth Tabery Theisen.  He was the third oldest in a family of nine children.  He attended St. Ann’s Elementary School and one year of high school in Wadena.  He graduated from St. John’s Preparatory School in Collegeville, Minnesota, in June 1944.  He entered Maryknoll Apostolic College (the Venard), Clarks Summit, Pennsylvania on September 4, 1944.  He received his Bachelor of Arts degree (1948) and Master of Religious Education (1953) at Maryknoll Seminary, New York and was ordained a Maryknoll priest on June 13, 1953.

Following ordination, Father Theisen was assigned to the Maryknoll Mission in Chile.  After language and cultural studies in Maryknoll Language School, Molina, Chile, he was appointed Assistant Pastor of the Maryknoll city parish in Chillan.  As was customary after one year, Father Theisen participated in a renewal course in Spanish in Cochabamba, Bolivia.  He was then assigned as Assistant Pastor in Panquehue, north of Santiago.  In late 1956 he was appointed Assistant Pastor of the Maryknoll parish in Temuco, a city of 200,000 and 500 miles south of Santiago. There, in one of the rural chapels, he began to be acquainted with the Mapuche people, who numbered some 500,000 in the south of Chile.

In February 1958 Father Theisen was appointed Pastor of the Parish of San Judas Tadeo in Ercilla, where the Mapuche people formed the majority of the population.  During his eight years there, he learned the Mapuche language and built chapels in the twelve different Mapuche communities.  He obtained the help of Chilean Franciscan Sisters to teach in the budding parochial school and, along with lay people, set up a catechetical program in Mapuche communities.

In late 1959, Father Theisen became involved in the work of the Fundación Instituto Indigena, founded by Bishop Piñera of the diocese of Temuco.  The purpose of the Instituto was to provide care for the spiritual, cultural, educational and social well-being of the Mapuche people.  He worked with Father Frank Belec PME, a French Canadian priest, and together they worked in the Mapuche apostolate with Chilean and Mapuche lay people of the diocese. He also taught the Mapuche language to the Seminarians of the neighboring Vicariate of Villarrica.

In September 1966 he was appointed Director of the Fundación Instituto Indigena.  Fathers Theisen and Belec encouraged the Mapuche to be proud of their culture, history and language, and taught them how to carry on their faith after the missioners were gone.  Their main task was to form Christian leaders in different parishes of the diocese where Mapuche people lived.  They also worked with agricultural technicians from the Instituto in cultivating gardens and beekeeping.

Father Theisen was a skilled ham radio operator, a hobby he learned in the seminary, and he saw the value of giving the message of Christ over the radio. Through a commercial radio station in Temuco, he began a weekly religious program providing music and the Gospel in the Mapuche language.  The program was aired over two other commercial stations and became very popular, even reaching across the Andes Mountains to Argentina.  In 1972, he took a special study course in Montreal on video communication.  Upon his return to Temuco, he resumed his work with the Instituto and used his new skills with the Christian Mapuche leaders.  In 1984 Father Theisen was appointed Director and Superior of Maryknoll’s Development House in Minneapolis and served there for three years.  He returned to Temuco, Chile in December 1987 and resumed his mission apostolate with the Mapuche people in the Archdiocese of Concepción, serving in the Maryknoll Parish of Cañete.

In December 1992 Father Theisen was assigned to do development work for Maryknoll in Puerto Rico for two years, after which he was assigned to Mexico in October 1994.  There he began to work in the Mayan rural communities of the Maryknoll Parish of San Sebastián, Merida as Assistant Pastor.  When he observed that the Mayan people spoke Mayan among themselves but also spoke Spanish, he began the study of the Mayan language.  In May 1998 he was elected Regional Superior for Mexico.  In May 2001 he was given retired status with residence in Mexico and continued his work with the Mayan people.  His work was concentrated in the eight Mayan communities that the parish served, reinforcing the Basic Communities of those areas as well as other Mayan communities in the Archdiocese.  He helped the Mayan people gain a better understanding of the Bible and and supported their concern for problems affecting the Mayan and other indigenous groups of Mexico.  Father Theisen produced audiotapes of songs, both religious and secular, in the Mayan language.  Father Theisen also produced, with the help of a Mayan religious Sister, the first complete catechism in the Mayan language.  He worked on the production of a Bible History of the Old and New Testament. He also transposed the Gospel of St. Mark from an older version of written Mayan to the language’s current version.

Father Theisen was assigned to the Retirement Community (now Senior Missioner Community) in November 2007 but continued working in Mexico until January 2012.  In February 2012 he moved to the Maryknoll Residence in Los Altos, California.  In 2016, Father Theisen returned to Maryknoll, New York to reside at the Society Center.

A Rosary and wake service was held on December 20, 2018 at the Holy Spirit Chapel in the Maryknoll Society Center.  Father Theisen’s remains were transferred to the Lady Chapel on December 21, 2018 where his family received condolences and prayers. The biography was read by Father Richard Albertine.  Mass of Christian Burial was concelebrated in Queen of Apostles.  Father Ernest Lukaschek was Principal Celebrant and was homilist.  Per Father Theisen’s wishes, his cremated remains were transported to Mexico and interred near the Parish of San Jose Tzal, where he served the Mayan people for 15 years.