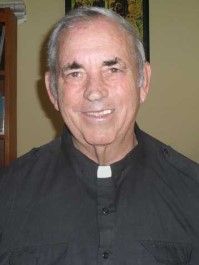 Father Francis B. Higdon died on October 19, 2020 at the Assisted Living Center at Maryknoll, New York. He was 80 years old and a Maryknoll priest for 53 years.

Francis Basil Higdon was born on February 9, 1940 in New Haven, Kentucky, second son in a family of nine boys and five girls, children of Francis A. and Mary Catherine (Smith) Higdon. He attended St. Catherine’s Parochial School and graduated from St. Thomas Seminary High School in June 1958. He entered Maryknoll College, Glen Ellyn, Illinois in September 1958 and received his Bachelor of Arts degree in Philosophy in May 1962. He was ordained a priest at Maryknoll Seminary, New York on June 10, 1967.

After ordination, Father Higdon was assigned to the Maryknoll Mission Region in Bolivia, South America. Following language studies in Cochabamba, he was appointed Assistant Pastor of the Guayaramerin Parish in the Pando Vicariate. The town, on the border between Bolivia and Brazil, grew from 6,000 to 16,000 inhabitants during the years he served there. There was a strong emphasis on local leadership in the Pando Vicariate in the turbulent post-Vatican II Church. The integral pastoral approach to Evangelization opened new approaches to the mission apostolate, with a wide range of services for the people, such as: a credit union, water and light, transportation, healthcare, commercialization and consumer cooperatives, many rural and urban schools, union organizing, youth leadership and catechetical programs, lay-pastor programs, and especially the team community approach to the apostolate. Engaging in this widespread apostolate in the villages along the Benicito and Mamore Rivers kept Father Higdon very busy. As a result of his work in social justice matters, he ran into opposition from government authorities who opposed what the cooperatives among the people were doing, and from powerful landowners who saw their power slipping as the people became aware of being exploited. Although the solidarity of the parish community and the Vicariate Maryknollers sustained him and made the atmosphere bearable, Father Higdon returned to the United States for a home leave and the Mission Renewal Program at Maryknoll, New York in 1975.

Upon his return to Bolivia, Father Higdon was assigned to Cristo Rey Parish in Cochabamba. He joined the priests, lay people and Religious in founding the Bolivian Human Rights Assembly and, soon after, the Social Pastoral Office of the Archdiocese of Cochabamba. The apostolate consisted of providing social and legal-aid services for the poor, a publishing house for teaching materials on the social doctrine of the Church, the sanctuary and prison ministry, and a studio for making programs for the local, national and international radio and TV outlets. Much time was spent in facilitating coordination and communication between parishes and pastoral workers. Father Higdon was appointed Director of the National Office of Social Assistance, which facilitated a powerful national union mainly for migrant farm workers. All of these activities were dangerous in the turbulent Bolivian political situation.

The Bolivian Bishops, pressed by the hierarchies of neighboring countries, asked the Maryknoll Regional Superior to release Father Higdon so that he could engage in the work of forming a team for caring for the millions of Bolivian emigrants. This was the catalyst for the birth of the Bolivian Missionary Association (AMB – Associación Misionera Boliviana) in 1981. With the help of canon lawyers, it was established as a Mixed Association of the Faithful, consisting of priests, sisters, Brothers, single and married lay people.

In 1985, Father Higdon was assigned as Pastor of the Saavedra Parish in Santa Cruz for pastoral work among the people. All his previous experiences of sacramental ministry, cooperatives, social work, youth work, health services, political and especially cultural and leadership organizations were put into practice. He served in this most joyful and fulfilling ministry for four and a half years.

In January 1991, Father Higdon received an assignment to the U.S. Region for work in the Development Department. His activities there placed special emphasis on vocation discovery among the youth of minority groups, especially Hispanics, in the Chicago area. In July 1993, he moved to the Denver, Colorado Development House where he covered a large geographical area, often single-handedly. Father Higdon moved to Pennsylvania in March 1997 to serve as Director of the Philadelphia Promotion House. Less than two years later, he moved again, this time to Washington, D.C. and the position of Regional Development Director.

In September 2001, Father Higdon was again assigned to the Latin America Region and, after participating in the Spiritual Renewal Program in the Holy Land in September to October 2001, he traveled to Brazil where he served as Vicar of São João Batista Parish. In addition to his duties as Vicar, he worked with prisoners and their families, with women’s groups to fight domestic violence, with schools and other organizations. He was elected as Assistant Regional Superior of the Latin America Region for a term that ended in October 2007.

Almost all of Father Higdon’s mission life was in formation work of one kind or another. Thus the years certified him as a teacher in formation programs for lay pastors, for missioners, for cooperative workers, for catechists, for Maryknoll Overseas Training Programs, and for seminary programs. He took many courses and was part of national, international and local teams for pastoral orientation. More than anything else, Father Higdon believed that we are here to train others to be missioners and to look for the signs of the Kingdom of God in each other.

Father Higdon was appointed to Senior Missioner Status in November 2015 while remaining a member of the Latin America Region. He continued his work in Bolivia until August 2016, when he returned to the United States and took up residence at the Maryknoll Center. Father Higdon was assigned to the U.S. Region in March 2017, and in June of that year celebrated his Fiftieth Jubilee as a Maryknoll priest.

A Mass of Christian Burial was celebrated in Queen of Apostles Chapel on October 28, 2020. Father Emile Dumas was Principal Celebrant and homilist. Father Jeremiah Burr read the Oath and Father Gerald Persha read the biography. According to his wishes, Father Higdon was cremated after his funeral and his cremains were placed in the Columbarium at Maryknoll, New York.