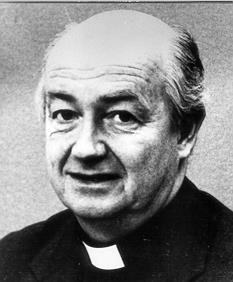 James Peter Sinnott was born on June 18, 1929 in Brooklyn, New York, one of four children of Francis and Marguerite Babcock Sinnott. He attended St. Malachy’s Elementary School and graduated from Brooklyn Preparatory High School in Brooklyn, New York. He earned a Bachelor of Science at Georgetown University in Washington, D.C. in 1950.  He also attended State University College of Medicine in New York City before applying to Maryknoll in 1952.  He was accepted, but got drafted before entering and served in the United States Army for two years from August 1952 to August 1954.  Immediately after he was Honorably Discharged, he joined Maryknoll and was ordained on June 11, 1960.

Father Sinnott was assigned to Korea where he served in the difficult missions of Paek Yang Do and Yeong Jong Do, island parishes off the coast of Inchon. In addition to parish ministry, he established a small hospital and a twenty bed TB ward nearby to bring needed medical care to the seven islands of the parish. He also set up a sewing cooperative for additional income for the islanders. During this time he was Vicar General of the Diocese of Inchon for ten years, from 1965 to 1975, and traveled to the diocesan center by public ferry. Father Sinnott wrote a book which was published in Korean on his experiences at Yeong Jong Island.

After a military coup in 1961 there were many violations against human rights in Korea. Father Sinnott became aware that the military government was trying to use the Church to foster its oppression and he could not remain silent. He loved to tell the story that in a visit with Cardinal Stephen Kim about human rights abuses, the Cardinal said to Father Sinnott: “these are the daily concerns of my heart.” It was a great encouragement for Father Sinnott in his work for human rights. His work was ecumenical, and he maintained lasting friendships with persons of other denominations with whom he worked for justice.  Because of his outspoken support for the oppressed and in particular for a group of five innocent men who were unjustly tried and executed hastily, he was deported in April 1975.   Father Sinnott kept a journal of the events of that year (which has been published in Korean as a book) and he wrote in English a synopsis of the events leading up to his deportation as a chapter of the book More Than Witnesses: How a Small Group of Missioners Aided Korea’s Democratic Struggle.

Father Sinnott returned to the United States, while remaining a member of the Korean Region, and worked with the Maryknoll Justice and Peace Office in Washington, lobbying Congress regarding deteriorating human rights in Korea, speaking at Churches  around the U.S. and connecting with human rights groups. Father Sinnott was assigned to the Chile Region in January 1985 and worked there until April 1987, when he was assigned to the United States. He continued his concern for Justice and Peace issues, working in Minneapolis, Minnesota and Houston, Texas.

In July 1994, Father Sinnott was re-assigned to Korea, where he worked for three years assisting Fr. Alfred Fleming in parish ministry. During that time he wrote a book on the life of Franz Jaegerstatter entitled Sonderling: The Franz Jaegerstatter Story, published as an audiobook. Franz, who was beatified in 2007, was executed by the Nazis for conscientious objection to serving in the German Army during World War II and is a symbol of one person’s solitary witness against an oppressive government. On January 1, 1998, Father Sinnott was assigned to the Retirement Community and moved to the Maryknoll Center.

After democracy was restored and in recognition of his contribution to the struggle, in 2002 the democratically elected ROK government sponsored Father Sinnott’s return to the Korea he so loved, and he received an award from President Kim Dae-Jung. He was assigned to Korea with Retired Status effective December 15, 2002 and for the rest of his life resided at the Seoul Center House. There he welcomed friends he had known since the early years at Yeong Jong Do and from human rights work in the 1970’s. He was a voracious reader, from Shakespeare (which he read throughout his life) to contemporary theology. He filled notebooks with reflections on events past and present, on books he was reading (usually several at a time) and on his own personal growth. He also composed poems that periodically appeared in the Maryknoll News. He took up painting and delighted in giving away hundreds of his paintings over the years.  He also did Centering Prayer and during his last years would spend hours in contemplative prayer in the garden of the Seoul House.

Throughout his life Father Sinnott kept learning, growing and reflecting on the deeper meaning of events. In his long and sometimes tumultuous life he integrated many talents as a creative pastor, zealous proponent of justice and human rights, writer, artist and contemplative.