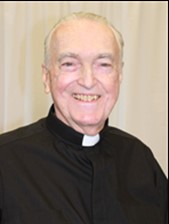 Father John J. Casey died on December 6, 2019 at the Maryknoll Society Center in Maryknoll, NY.  He was 90 years old and a Maryknoll priest for 63 years.

John Joseph Casey was born in San Francisco, CA on July 28, 1929, one of five children born to Daniel and Ellen Corkery Casey. He graduated from St. Joseph’s High School (Minor Seminary) in 1947 and earned a Bachelor of Arts degree in Philosophy from the University of San Francisco before entering the Maryknoll Novitiate in September 1951. In 1952, he began his theological studies at Maryknoll, NY where he received a Bachelor’s Degree in Theology and a Master’s Degree in Religious Education before being ordained on June 9, 1956.

Fr. Casey’s first assignment was to the Education Department of the Society where he spent the next 15 years.  During that time, he earned an MA in Classical Studies from the University of Michigan and a PhD. in Higher Education from the University of Chicago. He taught Greek and Latin first at Maryknoll Junior Seminary at the Venard from 1956 to 1961, then at Maryknoll Junior Seminary at Chesterfield where he was Vice-Rector from 1961 to 1964. He returned to the Venard as Rector from 1964 to 1967.  When the Venard was closed, Fr. Casey moved to the Maryknoll College in Glen Ellyn, IL, where he served as Academic Dean and Registrar and taught education courses from 1967 to 1971.

In 1971 when Glen Ellyn was closed, Fr. Casey was assigned to the Hong Kong Region.  After two years of Chinese language study, he joined the faculty of Hong Kong’s Holy Spirit Seminary, where for the next 11 years he was Dean of the Philosophy Faculty and professor of Philosophy and Fundamental Theology.  During that time, he was instrumental in obtaining affiliation for the seminary with the Pontifical Urbanian University in Rome and was appointed the University examiner for granting a degree in Philosophy.  He also did pastoral work as the Rector of Our Lady Queen of Angels’ church in the area of Fuk Wa Chuen, and then became associate pastor of St. Margaret’s Church in Happy Valley.  During a sabbatical year in Rome, he earned an S.T.L. in Systematic Theology.  In 1981, he became the Asia Pacific Area member of the reorganized Maryknoll Education Department and was responsible for the yearly continuing education program for Maryknollers in Asia.  In 1982, he was elected Assistant Regional Superior of the Hong Kong Region.

In early 1984, Fr. Casey was called back to the USA to become Academic Dean and later President of the Maryknoll School of Theology. During that time, because of the dwindling number of Maryknoll seminarians, the decision was made to move the seminarians to the Catholic Theological Union in Chicago. This left Fr. Casey free to follow a new line of mission work.  In the fall of 1989, he began a year of studies in Rome at the Gregorian University and a semester at the Selly Oak Colleges in Birmingham, United Kingdom, to prepare for a new ministry in Interreligious Dialogue. When a health problem kept him in the USA, he worked as Mission Controller in the Controller’s Office at the Maryknoll Center and he was invited during that time to be a member of the New York Archdiocese Catholic-Muslim Interreligious Dialogue Commission from 1991 until he returned to Hong Kong in 1993.

Upon his return to Hong Kong, Fr. Casey was invited to become editor of Hong Kong’s English Language Catholic newspaper, the Sunday Examiner, a position he held for the next ten years. During that time, he was also assistant pastor in Rosary Church, Kowloon. Fr. Casey was also involved full time as Coordinator of Interreligious Dialogue activities in the Asia Region, as a member of the Diocese of Hong Kong Ecumenical Commission, and as a member of the Catholic team involved in religious radio broadcasting in conjunction with the Christian Council of Hong Kong. On weekends he was involved in Chinese parish work.

In November 2007, Fr. Casey was assigned to the US Region to be the Coordinator of the Society History Program. The program ended after the Society’s Centennial in 2011 and all the information placed in the Society Archives. Fr. Casey served on the Board of Trustees of the Maryknoll Missionary Education Trust from 2008 through 2016 when he resigned.  Fr. Casey served as Director of the Society Library, which included Maryknoll’s’ in-house television Station, Channel 15, and participated in Intercultural Dialogue Projects. In 2018, Fr. Casey was assigned to the Senior Missioner Community.

A Rosary and wake service was held on December 10, 2019 in the Holy Spirit Chapel at the Maryknoll Society Center.  The biography was read by Fr. John J. Sullivan.  Fr. Casey’s remains were transferred to the Lady Chapel on December 11, 2019, where prayers were offered.  Mass of Christian Burial followed and was concelebrated in Queen of Apostles Chapel.  Fr. Alfonso Kim was Principal Celebrant and homilist.  Burial followed in Maryknoll Society Cemetery with Fr. Robert Lloyd conducting the graveside service.