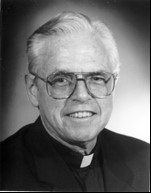 Father John-Daly J. Walsh died on April 20, 2020 at the Assisted Living Center at Maryknoll, New York.  He was 90 years old and a Maryknoll priest for 63 years.

John Joseph Walsh was born in Brooklyn, New York on September 6, 1929, son of John Joseph and Margaret Marie Daly Walsh.  He was one of two children.  John attended Our Lady of Good Counsel grammar school and graduated from Bishop Loughlin High School, both in Brooklyn.  He entered Maryknoll at the Venard in Clarks Summit, Pennsylvania, from Sacred Heart Parish in Glendale, Long Island in February 1947.

John became known as “John-Daly Walsh” when the Rector, Father William Pheur, in an effort to make a distinction between the various “John Walshes” on the student roster, advised him to use his mother’s maiden name, Daly, along with his first name.  The change was not a legal one, of course, but simply to help keep the Maryknoll Society records straight.

Father Walsh was ordained on June 9, 1956 at Maryknoll, New York.  His first assignment was to the Development Department and Vocation Ministry, and he worked in Cincinnati, Ohio for two years and then in New York City for four.  He was assigned to the Philippines Region in April 1962.  After language school, he became assistant pastor at Baganga Parish, Davao Oriental, and then pastor at St. Joseph’s Parish, Pantukan, Davao Norte.  From 1966 to 1967 he worked with the Philippine Mission Society in Cebu.  In September 1967 he was reassigned to the United States for Development work, and served for three years as Regional Director of the work in Connecticut.

Father Walsh was reassigned to the Philippines Region in July 1970, and remained actively involved in mission work there for the next forty years.  He was pastor of Mati Parish until 1975, when he was assigned as pastor at Baganga Parish. Beginning in 1980, he worked in the Archdiocese of Davao with ACDI (Apostolate to Communities Dislocated by Industrialization).  This organization worked primarily with industrial workers in squatter settlements along the shoreline.  In 1990 he began serving as Chaplain in the Port of Davao with the Apostleship of the Sea (AOS).  During this period he also served as Communications Coordinator of the Asia Area Chaplains and Asia Area Coordinator of Catholic Port Chaplains.  He was a member of the Vatican AOS Board of Consultors and AOS Pastoral Advisory Board.

Father Walsh received his Bachelor of Arts in Philosophy (1951), Bachelor of Sacred Theology (1955), and Master of Religious Education (1956) degrees from Maryknoll School of Theology, Maryknoll, New York.  In 1981 he was made a Doctor of Philosophy from SAIDI (Southeast Asian Interdisciplinary Development Institute) in Manila.  He was a delegate to the Seventh General Chapter in 1978 and a member of the Philippines Regional Council from May 1978 through March 1981.

Throughout his years in the Philippines, Father Walsh was involved in social action work, community development and labor relations.  He lectured and wrote extensively on the social teachings of the Church, labor issues in the Philippines, and grassroots Asian communities.  He received numerous awards from various institutions, both Catholic and lay, in recognition of his work.  In 1997 he was elected for a five-year term as National Director of AOS-Philippines, Inc. and was re-elected to an additional term in 2002.

In February 2010, Father Walsh returned to Maryknoll, New York for medical reasons and in September of that year, was assigned to the Retirement Community (now Senior Missioner Community).  He celebrated his 60th Jubilee as a Maryknoll priest in June 2016.

A Mass of Christian Burial was celebrated in Queen of Apostles Chapel on April 24, 2020 at 11:15 a.m.  Father Thomas J. O’Brien was Principal Celebrant and homilist, and Father Alfonso Kim read the Oath and biography.  Burial followed in the Maryknoll Society Cemetery.