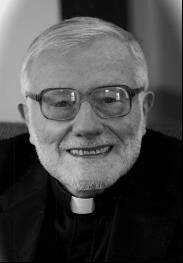 Paul Anthony O’Brien, son of Paul and Mary Loretto Wenstrup O’Brien, was born on December 16, 1928 in Cincinnati, Ohio. He had two older sisters, Patricia Boyer and Peggy McCarty. He attended Guardian Angel Grammar School and St. Xavier High School. After graduating from Xavier University in 1951 with an A.B. Degree, he was drafted into the U.S. Army during the Korean War and was honorably discharged as a 2nd Lieutenant in October 1953. Before entering Maryknoll in September 1954, Paul worked for the First National Bank, studying Law at night at Chase Law College. He first heard about Maryknoll in grade school, reading the Maryknoll magazine each month, and then subsequently while at Ft. Bliss Texas during Officers’ Candidate School, he heard a Maryknoller preach at a Post chapel where he signed up to be a monthly sponsor. “If I can serve my country as a Military why not my Church as a Missionary” he thought to himself. A dream became a reality on June 13, 1959, when he was ordained.

Father O’Brien was assigned to Bolivia, arriving on August 6th, Bolivia’s Independence Day. After language studies in Cochabamba, Father O’Brien was assigned to Riberalta as Assistant Pastor, first in Our Lady of Carmen and then in St. Joseph the Worker Parishes and finally became Pastor of San Antonio parish. Besides parish and river work, he taught English and Religion in the Maryknoll Sisters’ girls high school twice a week, as well as in the Pedro Kramer public high school.

Father O’Brien returned to the United States in 1965 and studied Pastoral Counseling and Guidance at Catholic University, Washington, DC. In May of 1966 he was assigned to the Development Department, working in the Cincinnati (3½ years) and Cleveland (6½ years) Development Houses. During the latter assignment he received a Master of Divinity in Pastoral Counseling at Case Western Reserve in 1973. Father O’Brien, when preaching for vocations and donations to support Maryknoll’s mission work, used to say: “If you can’t give or share what you have, how will you ever bring yourself to give or share what you are?”

Father O’Brien was reassigned to Bolivia in July 1975, and after language review, worked in Santa Ana and Christ the King parishes, as well as a part-time Confessor-Spiritual Director in the Cochabamba Language Institute. He was also involved, from time to time on weekends, with “Marriage Encounter.” In September 1979, Father O’Brien received permission to start full-time retreat work, along with part-time work in Marriage Encounter, visiting other communities outside the Cochabamba valley. Father O’Brien says that one of the most rewarding apostolic endeavors while missioned in Cochabamba was the twice-weekly celebration of home masses in the campo or outlining districts where people could not normally get to hear and participate in town on Sundays. These took place in the evening hours on Tuesday and Thursday nights. Maryknoll Sister Frances Kersjes would teach the families and their invited neighbors catechism and hymns, while Father O’Brien would hear confessions. He returned to the United States to study at the Institute for Spiritual Leadership in Chicago, receiving a Master’s Degree in Spirituality in 1983. Upon his return to Bolivia in September of the same year, he was assigned to La Paz, working in the San Pedro parish and in the Archdiocesan Family Life Center, especially with married and engaged couples.

On June 29, 1986 Father O’Brien founded the Spiritual Life Center, “Casa Nazareth,” in the heart of La Paz. This Center gave retreats, offered spiritual guidance, confessions, marital counseling and scriptural study. Although he retired in January 1999, Father O’Brien maintained almost the same schedule as before, with the addition of hearing high school confessions and as a part-time chaplain to the local men’s union in La Paz.

On May 1, 2005 Father O’Brien joined the Senior Missioner Community and returned to Maryknoll, New York, where he resided for ten years, before moving to Mission St. Teresa’s in October 2015. While at the Center, he helped out at the Maryknoll Sisters and occasionally at local parishes, and assisted with pastoral duties at Phelps Memorial Hospital in Sleepy Hollow, New York, where he also celebrated Mass each Sunday at 11 a.m. He was also involved, from time to time, with 5 prisons with a “REC” (Residents Encounter Christ) Program that resembles the Cursilla movement. It is a weekend experience that consists of a team of 6 or 7 men or women lay participants (depending on their respective prisons). Father O’Brien was appointed to the Mission St. Teresa’s Prayer Partners Team in February 2016.

On the occasion of his 50th Jubilee, Father O’Brien reflected: “As I think back over our various mission endeavors in Bolivia, where I spent some 33 years, I believe without hesitation the most rewarding, both personally and for the people, was the varied spiritual activity that took place in Casa Nazareth. If there is an apostolate that truly proves most beneficial to both priest and people, it is that which brings us closer to God, Who is not only the reason for our existence on earth, but our destiny forever in heaven.”

A Rosary and wake service was held at 4:00 p.m. on June 30, 2016 at Mission St. Teresa’s. The body was received at the Maryknoll Society Center at 9:30 a.m. on July 1, 2016. The family received condolences and prayers until 10:45 a.m. in the Lady Chapel. The biography was read and Mass of Christian Burial followed at 11:00 a.m. and was concelebrated in Queen of Apostles Chapel. Father Michael Duggan was Principal Celebrant and Father John Gorski was homilist. Burial followed in Maryknoll Society Cemetery.