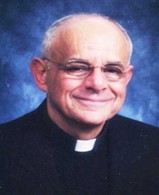 Father Raymond J. Nobiletti, M.M. died on July 10, 2021 at the Assisted Living Unit at Maryknoll, New York.  He was 79 years old and a Maryknoll priest for 52 years.

Raymond Joel Nobiletti was born on June 3, 1942 in Brooklyn, New York, son of Bernard and Marie Di Gregorio Nobiletti.  He had an older sister, Frances, and younger brother, Carmine.  Raymond attended St. Barnabas Elementary School in the Bronx and Power Memorial Academy in New York City.  He graduated from the Maryknoll Seminaries in Glen Ellyn, Illinois, Hingham, Massachusetts and Maryknoll, New York, where he was ordained a priest on May 24, 1969.

Following ordination, Father Nobiletti was assigned to the Maryknoll Mission Region in Hong Kong, where he studied Chinese language and Asian Religions at the Chinese University of Hong Kong.  In 1970, he became Assistant Pastor at St. John’s Parish in Kwun Tong and in 1972 was appointed Pastor of Immaculate Heart of Mary Parish in Sau Mau Ping.  In 1978, he was appointed founding Pastor of St. Stephen’s Parish in Kwai Chung, New Territories where he supervised the construction of the church, school, youth center and rectory.

While in Hong Kong, Father Nobiletti was a pastoral training supervisor for seminarians at Holy Spirit Seminary, Our Lady of Maryknoll Hospital, and was director of the Maryknoll Overseas Training Program and Lay Missioner Program in Hong Kong.  He was also a delegate to the Hong Kong Priests’ Council, member of the Diocesan Reconciliation and Arbitration Board and President of the Conference of Major Superiors of Men in Hong Kong.

In 1991, Father Nobiletti became pastor of Transfiguration Parish in Chinatown, New York City where he served the multicultural population of lower Manhattan for the next 27 years.  He said that working with and loving the peoples whom he had been asked to serve and learning from them was the privilege of his mission career. In remarkable ways, Transfiguration Parish lived the spirit of Maryknoll.  The parishioners served in over 20 volunteer organizations, and many whose families immigrated were helping the newest arrivals.  The global church can learn from Transfiguration Parish that the successive waves of immigrants from different continents and cultures have put their faith into action to welcome, support and integrate with newcomers.

On September 11, 2001, Father Nobiletti was a first-responder to the catastrophic attack on the World Trade Center.  He rushed to the triage site, knowing that the presence of a priest would be important to both survivors and responders.  Ministering to the burned and injured outside the South Tower, he was caught in the collapse of that building.  Father Nobiletti later reflected that it was “a gift and a privilege… to be an instrument of God’s grace and part of the team of people from all walks of life who made God so present to all on that day.”

Father Nobiletti retired as Pastor of Transfiguration Parish in June 2018 and took up residence at the Society Center in Maryknoll, New York.  He continued to help at the Parish, serving as Pastor Emeritus.  In February 2019 he was appointed to the Pastoral Visitors Team at the Maryknoll Center.

On the occasion of his Fiftieth Jubilee when asked what he would like people to understand about mission, Father Nobiletti reflected, “Every Catholic has a mission vocation, from foreign missioner to housewife and family man.  We must see the gifts to do mission that God has given to us wherever we are and under varying and sometimes challenging circumstances.” Father Nobiletti was assigned to the Senior Missioner Community in 2020.

A viewing was held on July 13, 2021 at Transfiguration Church in New York City and a prayer service followed. A Funeral Mass was held on July 14, 2021 at Transfiguration Church.  A Wake service was held on July 17, 2021 in the Holy Spirit Chapel at the Maryknoll Society Center.  Mass of Christian Burial followed and was concelebrated in Queen of Apostles Chapel.  Father Timothy Kilkelly was Principal Celebrant and Father Rodrigo Ulloa-Chavarry was homilist.  Father Kevin Hanlon read the biography and Father Francis Felter read the Oath.  Burial of cremation remains will take place in the Maryknoll Society Cemetery.