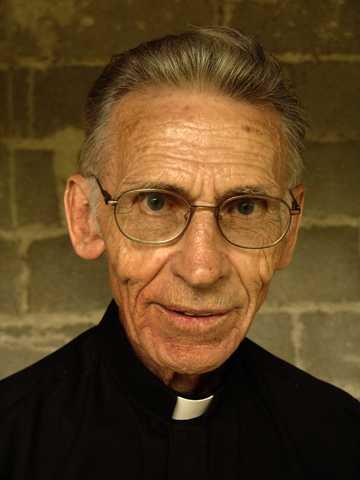 Father Richard Frank died at Providence Hospital East in El Paso, Texas on July 29, 2016.  He was 88 years old and a Maryknoll priest for 63 years.

Richard Clarence Frank was born in Remsen, Iowa, on August 21, 1927,   son of Michael and Emma Klosterman Frank.  He has three brothers and three sisters.  Richard graduated from St. Mary’s Parish Grade and High School in Remsen, Iowa in June 1944.  He studied at Trinity College in Sioux City and graduated from Loras College in Dubuque, Iowa, with a Bachelor of Arts degree on June 1948.  He attended St. Paul’s Seminary in St. Paul, Minnesota for one year and then entered Maryknoll Seminary, Ossining, New York, on September 19, 1949.  He was ordained a priest at Maryknoll, New York on June 13, 1953.

On the day after ordination, Father Frank participated in the 36th Maryknoll Departure Ceremony in St. Patrick’s Cathedral, New York City and left for his assignment to the Maryknoll Mission Region in Peru, South America.  Due to political unrest in Bolivia, a provisional language school operated in Arequipa, Peru for six months where the seven new members of the Region studied, and the following year he spent ten weeks at the Maryknoll Language School in Cochabamba, Bolivia.  He began his pastoral ministry in Azangaro, where he was a member of the parish pastoral team for the next 12 years and for the following two years in the San Juan Parish Pastoral Group in Puno.  After that he worked with different diocesan priests for six years in Asillo among indigenous peoples.  He was influential in developing lay leaders in many of the rural communities of the Altiplano.  For 20 years he served in the Altiplano mission and gained the reputation as “the iron man” of the Region.

On February 1, 1974 while on home furlough, Father Frank was transferred to the Central American Mission Region.  After six months with the Cathedral Parish team in Huehuetenango, Guatemala, he was named the Pastor of San Sebastian Parish and its vice-parishes, where he worked alone for the next five years.  The Regional Council decided that the Huehuetenango Diocese had enough native priests to cover these parishes, and a need came up for help in Nicaragua, so Father Frank and four other priests took up work in Nicaragua in the Esteli Diocese.  He served one year as Pastor of San Juan de Limay Parish and the next year in La Trinidad.  Due to another Regional decision, everybody was moved from the Esteli Diocese to work in the Matagalpa Diocese, where he served as Pastor of San Ramon Parish for the next 11 years, during the ten-year civil war in Nicaragua.  By the end of 1992 following the new evangelization methods adopted by the diocese, he left over 100 small Christian communities functioning in the parish.

On January 24, 1993 he was named the Pastor of Nuestra Senora del Carmen in Cofradia, Honduras.  In order to start the new evangelization in Honduras, he brought a team of lay missioners from the parish that he left in Nicaragua, and, after four months, a few small communities (a total of 42 persons) came into existence.  During the next ten years, the evangelization continued so that when Maryknoll turned back the Parish to the Bishop on the 29th of September 2003, more than 4,000 were participating, but, unfortunately, not all persevered, but are now thriving under the Augustinian Fathers who came in 2010.

Father Frank remained in Honduras until late 2003, when he returned to Nicaragua to the Parish of Rancho Grande to work with Father Theodore Custer, M.M.  He was formally assigned to the Pastoral Group in Honduras/Nicaragua in February 2004.  Father Frank continued his work in Nicaragua until 2006 when he returned to work in the Parish of Santiago Apostol, San Pedro Sula, Honduras.  In August 2011 Father Frank, because of health problems, left his work in Honduras and returned to the United States to work as Administrator in Immaculate Heart of Mary and St. Patrick’s Parish in Canutillo, Texas in the Diocese of El Paso.  Father Frank was assigned to the Senior Missioner Community in February 2012.

A Rosary and vigil were held from 7:00 p.m. to midnight on August 3, 2016 at St. Patrick’s Church in Canutillo, Texas.  Mass of Christian Burial was on August 4, 2016 at 11:00 a.m. at St. Patrick’s Cathedral in El Paso, Texas.  The Vicar General of the Diocese, Rev. Anthony C. Celino was principal celebrant and Maryknollers, Father Emile Dumas and Father David Kelly, concelebrated.  Father Frank’s body was returned to Maryknoll, New York.  A Rosary and wake service was held at 4:00 p.m. on August 10, 2016 at Mission St. Teresa’s.  The body was received at the Maryknoll Society Center at 9:30 a.m. on August 11, 2016.  The biography was read by Brother John Blazo.  Mass of Christian Burial followed at 11:00 a.m. and was concelebrated in Queen of Apostles Chapel.  Father Joseph La Mar was Principal Celebrant and Father David La Buda was homilist.  Burial followed in the Maryknoll Society Cemetery.