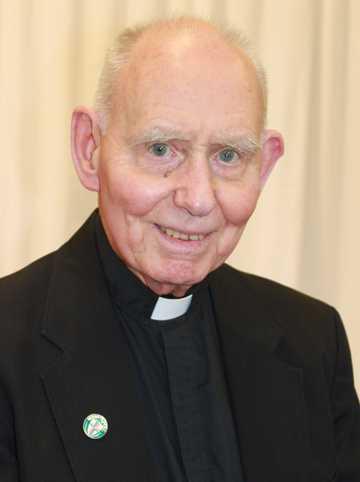 Father Wayman P. Deasy died on October 18, 2016 at Harlem Hospital in New York, New York.  He was 84 years old and a Maryknoll priest for 57 years.

Wayman Peter Deasy was born on September 28, 1932, in Salt Lake City, Utah, son of Joseph and Josephine Jenkinson Deasy.  He was the second of three children.  Shortly after his birth, his mother returned to Oakland, California where he was raised.  Wayman heard about Maryknoll through a missioner who gave a talk at his parish.  After finishing grammar school at Our Lady of Lourdes in Oakland, he entered Maryknoll’s Junior Seminary in Mountain View, California in September 1946.  He received his B.A. Degree at Maryknoll College Seminary, Glen Ellyn, Illinois and his S.T.B. and M.R.E. Degrees at Maryknoll, New York.  He was ordained at Maryknoll, New York on June 13, 1959.

Father Deasy stressed the importance of mission education in the U. S. Church in order to keep alive the flame of mission in the world today:  “Evangelization is the task of every Christian and not just a select group.  In the U.S. we tend to become inward looking even though Popes John Paul II and Benedict XVI called on all Catholics to become missionaries.”

A Rosary and wake service was held at 4:00 p.m. on October 25, 2016 at Mission St. Teresa’s.  The body was received at the Maryknoll Society Center at 9:30 a.m. on October 26, 2016. Father Deasy’s family received condolences and prayers until 10:45 a.m. in the Lady Chapel.  The biography was read by Father Edward  Davis.  Mass of Christian Burial followed at 11:00 a.m. and was concelebrated in Queen of Apostles Chapel.  Father  Michael  Duggan was the Principal Celebrant and homilist.  Burial followed in Maryknoll Society Cemetery with Father Russell  Feldmeier conducting the graveside service.