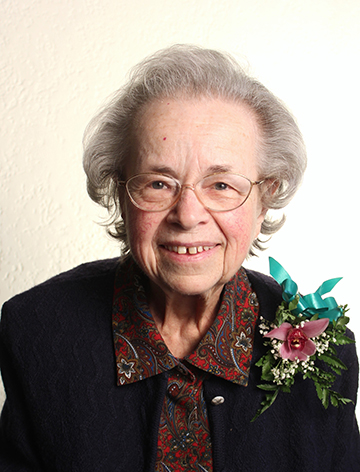 On August 13, 2020 at 6:20 p.m. Sister Agnes Mary Joy, 89, passed to our loving God in the Maryknoll Sisters Residential Care 4. She had been in poor health for some time. Agnes was born in Newburg, New York on June 10, 1931, the daughter of Edward McGlynn Joy and Louise McLaughlin Joy, both of whom have predeceased her. Agnes had a younger sister, Mrs. Jane L. Larkin, who also predeceased her on November 26, 2005.

Agnes graduated from Mount St. Mary High School in Newburg, NY in 1949. She then secured a scholarship to the College of St. Rose in Albany, New York, graduating with an A.B. in English and Philosophy in 1953. Following graduation she was offered a teaching position in a small school in Long Island, New York but she was also offered a scholarship at the Catholic University of America in Washington, DC. She decided to continue her studies for a Master’s Degree in History which she earned in 1954. She entered the Maryknoll Sisters Congregation on September 2, from St. Mary’s Parish, Newburg, New York that same year.

Agnes sometimes found the novitiate difficult since so many who had entered with her were much younger and just out of high school. This was offset, however with one special joy—Mother Mary Joseph, the Maryknoll Sisters’ founder, though retired and ill, was in residence at the Center. Agnes wrote, “I loved her and delighted to see her, to hear her speak with us…. I looked forward to feast days when I could be with her….” (Mother Mary Joseph died in 1955.)

At her Reception into the community, Agnes had been given the religious name Sister Grace Louise. She returned to her baptismal name after Vatican Council II. Agnes made her First Profession of Vows at the Maryknoll Sisters’ Motherhouse on March 7, 1957. That same year she was missioned to our Central American Region and to Puerto Armuellas, Panama. There, she taught at San Antonio High School, the first high school in the remote banana-producing location. There also she made her Final Vows on March 7, 1963. She was then assigned to Puebla, Mexico and appointed superior of the mission. There she also served as Directora Tecnica in the Jesuit elementary School for boys.

For Agnes, her years in mission in Central America from the time of her assignment in 1957 until 1967 were fondly remembered especially for the relationships she had enjoyed with the Sisters and the people among whom she worked.

Recalled to the States in 1967 she was assigned to be Assistant Novice Mistress, a post she held for two years. In 1969 she was appointed Assistant to the Director of Formal Education and from 1971 through 1973 she was a Staff Member of the Orientation Team, the group who assisted our new entrants.

For six years Agnes had worked with newcomers to the Maryknoll Congregation. She was now ready for something new and different. Her search led to an invitation to study as a chaplain intern in a Clinical Pastoral Program (ACPE) in the Institute of Religions and in the Harris County Hospital District in Houston, Texas. She moved to Houston where other Maryknoll Sisters worked. There she completed a five-year course to become a Clinical Pastoral Education Supervisor. As director of the pastoral care department and as ACPE supervisor; she taught and supervised learning by clergy, seminarians and lay persons from around the world. Agnes had now found her vocation within her Maryknoll vocation, the key to a calling she felt toward the needy who were ill and hospitalized.

Agnes progressed rapidly in the program; she became a Pastoral Education Supervisor in the Association for Clinical Pastoral Education. Her work was at Harris County Hospital District’s Ben Taub Medical Center, a huge and prestigious, multi-national, multi-lingual hospital catering to the poor and disenfranchised from many countries, along with the general public. She served there as Director of Chaplains for thirty-one years, retiring in 2014. In this work during those years Sister Agnes delighted in having been able to provide chapels in the four major hospital buildings where she served. These are multi-faith sanctuaries for peace and meditation for the staff, patients and families who use the chapels for memorial services and prayers. In collaboration with the local clergy and seminaries she helped offer many clinical Pastoral Education courses for three decades to hundreds of pastoral students. Sister Agnes also has the distinction of providing one of the first Spanish speaking CPE programs in the United States.

Her remarkable work did not go unnoticed. She received many and various awards. At her formal Retirement she was cited for generous and faithful dedication. Some of us were privileged to be at the Ceremony and witnessed her gratitude and dedication along with the love and appreciation of the people for her.

Agnes’ time in Texas was also notable for many Maryknoll Sisters living there or traveling through. She was most hospitable, loved to cook and always had food available. Nothing pleased her more than to have guests.

On, April 1, 2015, Agnes, in failing health, was assigned to Maryknoll Residential Care community where she was able to enjoy contact with the wider community and where she died.

Sister Agnes’ body was brought to the Maryknoll Sisters’ Chapel on August, 17, 2020 where it remained until the following day. On Tuesday, August 18, 2020 she was interred in the Maryknoll Sisters cemetery. Of her it could be said, “Well done, good and faithful servant ….Enter into the joy of the Lord.” (Mt. 25:23.).