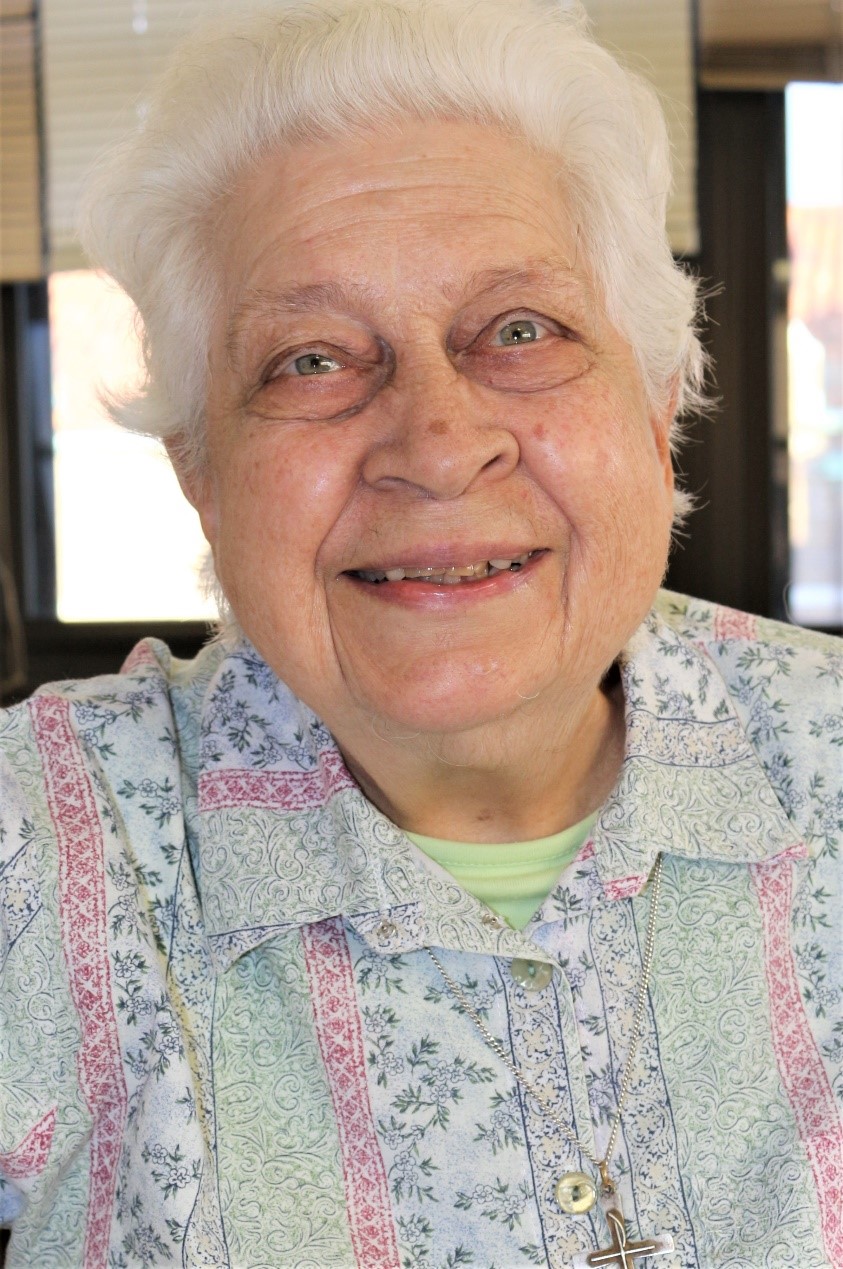 This morning we are gathered together to celebrate of the life of our dear Sister Ann Catherine Klaus who died suddenly on the morning of August 4, 2021 at the Maryknoll Sisters Center, Maryknoll, New York. As in life so also in death, Ann died quietly and peacefully. Ann was 93 years old and a Maryknoll Sister for almost 74 years.

Ann was born on August 1, 1928 in Marion, Ohio to Louise (Risch) Klaus and Francis Joseph Klaus. She was the second child of four. Her family was very loving and hard working. Her parents and two sisters Mary Louise and Barbara have predeceased her. Her brother Francis and her sister Patricia are with us by live stream today, along with her nieces and nephews.

Ann graduated from St Mary’s High School in Marion, Ohio, in June 1946, already knowing that she wanted to be a religious sister. She applied to Maryknoll and in October 1947, she started her novitiate at Valley Park, Missouri. Her talents as a seamstress were quickly recognized by Sr. Ambrose who was struggling to make 57 habits for the Reception Ceremony of the new novices. Ann had worked in a clothing factory before entering Maryknoll, so she was quick to learn the intricacies of making a Maryknoll habit. You can just imagine the delight of Sr. Ambrose!

Ann received the Religious name of Sister Mariana at her reception May 1948, and made her first vows at Valley Park on May 8, 1950. She made her final vows on May 8, 1953 in Tanganyika, East Africa. Ann returned to her baptismal name after Vatican II.

After first vows, Ann, was assigned to the Motherhouse in New York and was enrolled in Maryknoll Teachers College to study for their Bachelor Degrees in Education. Ann’s education was interrupted when a request came from the African Region for a seamstress to help sew white habits for the sisters. So, Ann packed her bags and was on a steamer headed for East Africa in 1951. Ann’s parents were at the Port of New York to wave her off. Many wonderful tales are told of this long 3-month “safari” by sea.

What can one say about Ann? Many people described Ana as a soft spoken, quiet, thoughtful and cheerful person. However, to those of us who knew Ann, she was dynamite! She went wherever there was a need – she responded. In Ann’s own words: “I would like to offer my talents to our community: my creative ability – I am especially good at making something from nothing, like scraps, left overs; My cooking ability is mostly plain cooking but I enjoy baking; my ability to write up happenings of every day; My sewing talents”. Ann made use of all her talents wherever she went.

When Ann arrived at Kowak (Musoma Diocese) in 1951, her fist mission, she immediately started sewing the needed white habits and teaching sewing to the Immaculate Heart Aspirants. She then went to Nyegina (1954) to open the first primary school and be house superior; then back to Kowak (1958) teaching in the newly founded middle school; and then to Makoko (1959) to work with the newly founded novitiate of the Immaculate Heart Sisters of Africa.

Finally, in 1961 after ten years in Tanganyika, she took her “decennial’ and finished college at Maryknoll Teachers College in 1962 receiving a Bachelor of Education degree.

Ann was assigned to the Shiynyanga Diocese Girls School at Buhangija (1962) teaching various Domestic Science subjects. Upon leaving, she received a citation from the Board of Governors of the School:  “Your contribution to the school, academically, spiritually and morally was greatly appreciated.” In the heat and desert-like conditions of Shinyanga, Ann, along with Mary Lou Andrews, yearned for snow. At Christmas 1968, they got their wish by making the climb up snow-covered Mt Kilimanjaro (19,340ft).

When a new Maryknoll mission opened in Shinyanga, Ann’s desire to work with rural women was fulfilled and she joined the team at Mwamapala (1970). Ann had a Volkswagen Kombi that she outfitted with all her cooking and sewing needs. She bumped over the rough roads of Shinyanga giving seminars to village women in health care, cooking and sewing. Ann was our first “Pacha Mama” as she developed solar cookers and small-scale vegetable gardens with the women. In 1978, through the AMECEA (East African Bishops) Ann studied pastoral work at the Gaba Training Center in Uganda for 10 months under the guidance of Sr. Josephine Lucker, MM. In 1979, she joined the new pastoral team at Baiardi Parish (Shinyanga) continued her ministry with women. This was one of the happiest times of Ann’s 60 plus years in Tanzania. Wherever Ann went, there was always a vegetable garden and flowers growing. She had a very big green thumb!

Ann was a prolific writer and had developed 10 booklets for rural women on various subjects such as childcare and domestic science. UNESCO TANZANIA printed these under their Adult education plan and they were widely distributed in Tanzania. She also wrote a famous cookbook, “UOAKAJI” (Baking), during this time in Shinyanga. Ann was also famous for training the cooks of the Maryknoll Fathers in Shinyanga Diocese, especially how to bake bread and make pies! Ann offered to do Congregational Service in 1975 and again in 1983 helping in the Health Unit.  However, as soon as a call came out for Maryknoll Sisters to assist in the refugee camps in Somalia, (1987) Ann was the first in line. She joined Sisters Katie Erisman, Sylvia Elaine Postles and Eileen Kelly on the team. They served the Ethiopian refugees in Somalia for over two years. It is said that even in the desert Ann could grow vegetables!

New fields opened for Ann in 1989 after she gave service at the African World Section House in Nairobi, Kenya. When the Maryknoll Sisters were invited to the newly founded Diocese of Geita. Ann joined them first at Sengerema Kindergarten Teacher Training School helping the students to make teaching aids, and then in the rural area at Kalebezo Village, VEMA Project. Her contributions there could fill a book. She continued to assist the women in learning skills like sewing, cooking, childcare and she also starting an income generating crafts program. She and Sister Peg Donovan made a dream come true by creating together the new VEMA Vocational Training Center; Ann designed the Center and she and Sister Peg supervised its building. The women Ann trained in sewing became the first Teachers at the new Center.

When rural life was no longer a choice for Ann she moved to Mwanza City where other Maryknoll Sisters were living and continued with her women’s development and pastoral work and added a new dimension, that  of ministry to AIDS Orphans.

Ann was assigned to the Maryknoll Center, Rogers Community in August 2012. She continued to do volunteer work, visiting the sick and sewing the famous adult bibs. She loved to sing and she remembered all the words of the songs. Even while celebrating her birthday this year on August 1, her voice was robust and joy filled!

In closing, we paraphrase what Sister Margaret Rose Winkelmann said of Ann in 1953 because we can also say this of her today: “Ann was deeply spiritual and a fine example of a contemplative in action. She was generous and friendly to everyone and had a happy and cheerful disposition, a great joy to live with. She had a variety of talents, which she put to practical use. She was a real asset and a treasure for any community.”

Ann we love you and thank you for your life with us in Maryknoll all of these 74 years. You are a treasure and we will miss you, “a woman without guile.”

We are pleased to have Fr. Edward Davis, MM with us for the celebration of the Liturgy of Christian Burial.