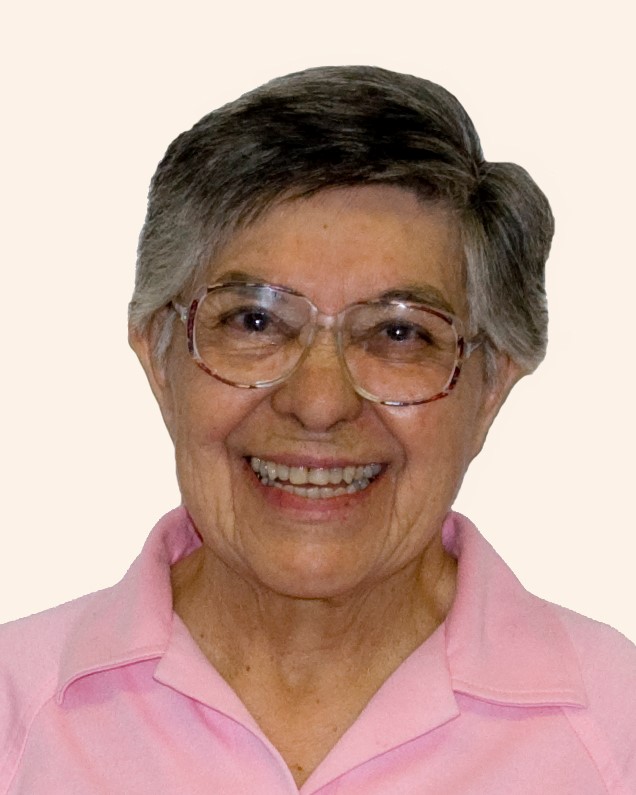 In the last few years, Sister Bea could be found each morning sitting by her desk, facing the wall where a large crucifix hangs. There was no question that it was her prayer time and space, into which someone would be graciously welcomed; no one left without receiving an intentional “thank you”.  How much of her life was gathered in those times with God?  God gathered Sister Beatrice Carvalho into eternal love as she died in Maryknoll Sisters Residential Care early on the morning of January 10, 2021.  She was a Maryknoll Sister for 76 years.

Beatrice Dorothy Carvalho was born in Hawi, Hawaii (on the Big Island) on June 22, 1924. In the late 20’s the family moved to Wailuku, Maui. Her mother, Margret Silva, was Hawaiian born of Portuguese descent; her father, Eugene Carvalho was from Puerto Rico. Beatrice had three sisters: Elaine, Evangeline, and Mary and four brothers: Albert, Frank, Manuel and John.  They were members of St. Anthony Parish, Wailuku, Maui.

It was in her freshman year of high school that Beatrice became interested in becoming a missionary. She read what she could of missionary work and felt drawn to work with the poor. In her application to Maryknoll Sisters, she noted the ‘lovely spirit of the sisters’ yet remained open to responding to God’s invitation however it would unfold. Since Beatrice met Mother Mary Joseph during one of Mother’s visits to Hawaii, the communication between Beatrice and Mother regarding Beatrice’s applying to Maryknoll Sisters had a tender familiarity. Beatrice was accepted to enter Maryknoll Sisters in 1944.  Because of concerns in the midst of WWII, and to earn funds for her passage from Hawaii, Beatrice worked in a war-related job for two years.

Beatrice entered Maryknoll in New York on September 6, 1944. At Reception into the novitiate in March of 1945, she was given the name Sister Rose Damien.  In 1947 sister made her first vows as a Maryknoll Sister and her final vows in 1950; both celebrations of profession were at the Motherhouse in New York.

Also in 1950 Sister Rose Damien graduated from Maryknoll Teachers College, Maryknoll, NY with a Bachelor’s Degree in Education and received her first mission assignment to Central America, setting out for about 30 years of generous service between Nicaragua, Panama and Mexico.

Sister’s first placement was in Siuna, Nicaragua where she taught 1st grade for three years in a Maryknoll School. Her transition to Panama began in 1954 when she taught catechetics to patients in a Leprosy Hospital in Ancon, Panama and on a military base. The following year, Sisters Beatrice and Margaret Good opened a new Maryknoll Sisters house in Puerto Armuelles, Panama. Sister Beatrice became the Director of Colegio de San Antonio, a secondary school.  She also served as Regional Superior for six of her years in Panama.

After a renewal period at the Maryknoll Center in New York, Sister Beatrice continued on to yet another country, this time to Mexico. Beginning in 1961 and for the next six years, Sister Beatrice was principal at Helena Herlihy Hall, a primary and high school for girls in Mexico City. The following four years, from 1967-1971, were in Puebla, Mexico where she taught English in a Jesuit primary and high school.

From 1980-1985, Sister Beatrice returned to the Motherhouse in NY to work in the Treasury Department for two years and then as a member of the Center Council for the following three years.

In 1986, Sister Beatrice returned again to Central America, this time for fifteen years of ministry in Guatemala.  Sister Beatrice, along with other church ministers, addressed basic living needs and pastoral care of the residents in Mezquital, a squatters’ area of more than 5,000 people in the outskirts of Guatemala City. Many of the people were left homeless by an earthquake in 1976. Sister Beatrice used her educational background to help establish fifteen catechetical programs for public school youth as well as providing sacramental programs in the developing parishes.

From 2001 to 2005, her new mission of accompaniment was in Chicago. With her great flexibility, generosity and love for Maryknoll, Sisters Beatrice accepted the Congregational Service position as Co-director of the Orientation Program for new candidates to Maryknoll Sisters.

Beatrice moved into retirement to Monrovia, CA in 2006. In 2012 she returned again to Maryknoll, NY where more options for assisted living and health care were available. Both in Monrovia and in New York, Sister Beatrice maintained her connection with the Central American countries through many personal contacts and her Ministry of Prayer assignment for the people and needs of Central America.

Bea’s story telling of mission experiences were always with her radiant smile, deep joy, great gratitude, and always expressive of experiences of God in all.  As her very name implies, Sister Beatrice has been a blessing with her even disposition, peaceful quietness of soul, and lovely aloha hospitality.