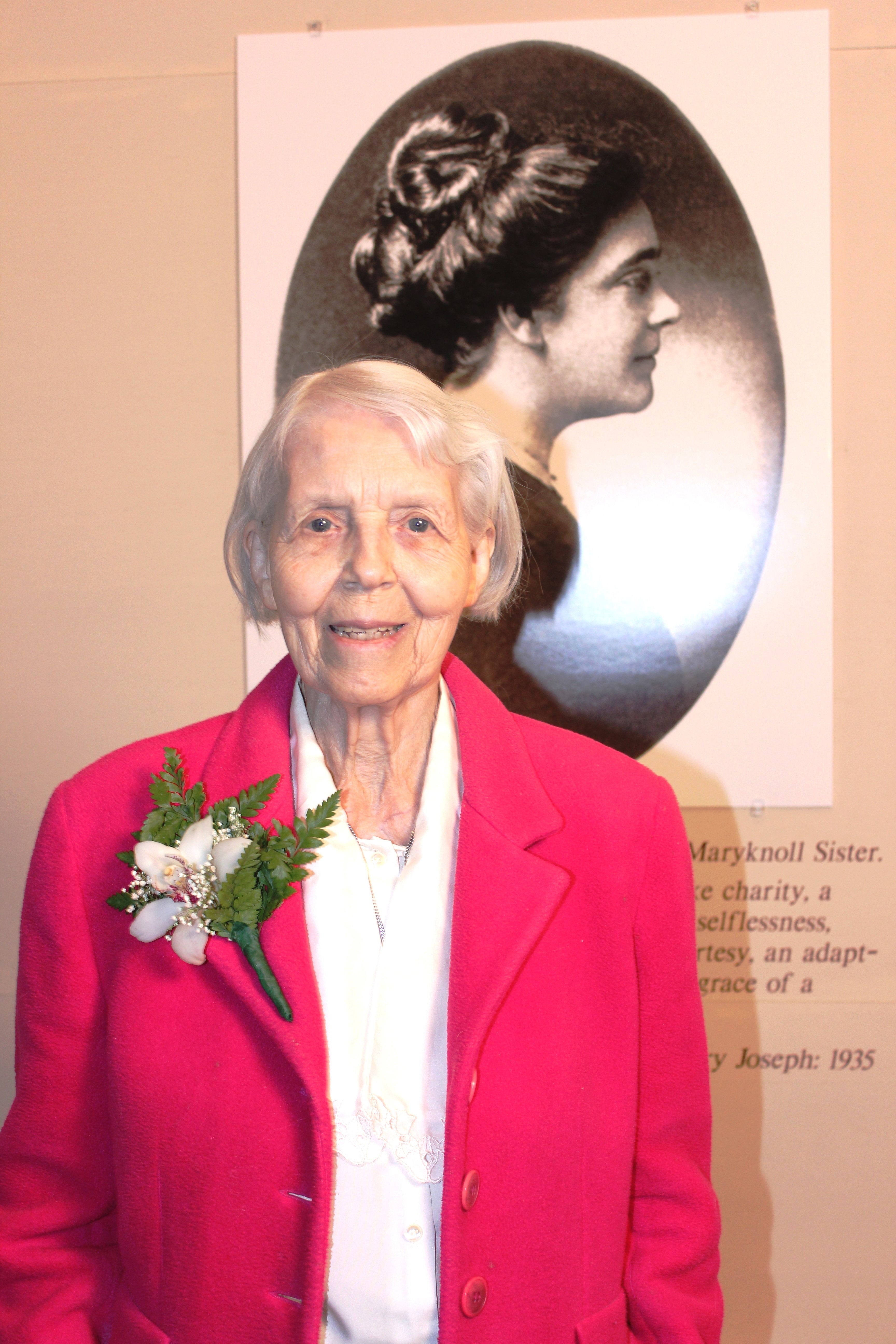 Sister was born on September 27, 1923, to Mildred (Hower) Black and Paul D. Black and was baptized Mary Lois.  She had one brother, Paul F. and one sister, Mrs. Virginia Treat, both have predeceased her.  Mary Lois graduated from Dansville Central High School in 1939 and earned an RN license from St. Joseph’s Hospital School of Nursing in Elmira, NY, in 1945.  She entered the Maryknoll Sisters at Maryknoll, NY, on September 6, 1945 from St. Patrick’s Parish, Dansville, NY, in the Rochester, NY Diocese.  At her formal Reception on March 7, 1946, she received the religious name of Sr. Camille Marie which she retained the rest of her life.  She made her First Profession of Vows on March 7, 1948 at Maryknoll, NY, and her Final Vows in Manila, Philippines on March 7, 1951.

Sister’s first overseas assignment was in 1948 to St. Joseph’s Hospital in Manapla, Philippines where among other hospital duties she served as Nursing Supervisor.  In 1955 she returned to Maryknoll, NY, where she was assigned to the Motherhouse Infirmary and at the Retirement Home at Bethany.  In 1959 she was missioned to Guatemala where she became Assistant Director of the boarding school and school nurse at Colegio Monte Maria in Guatemala City.  In 1963 she moved up country to San Pedro Necta, Huehuetenango, for six months to assist in the care of a Maryknoll Sister who had taken ill.  She then moved to Jacaltenango, Huehuetenango, where between 1963 and 1966 she both organized the operating room and helped prepare staff for a new hospital being run by the Sisters.

In 1967 Sister Camille Marie was reassigned to the Philippines where she worked temporarily in St. Joseph’s Hospital in Manapla until 1968 when she returned to Maryknoll, NY to begin studies at Rogers College.  There she earned an Associate of Arts degree in 1970 and a Bachelor of Science degree in Education in 1972.  This was the time of a career change for Camille Marie.  Initially dismayed by the turmoil of the ‘60s both in religious life and with the social unrest in the countries where she worked, through her studies and contacts she emerged for many as a woman ahead of her time.  Participating in groups and associations studying the works of Teilhard de Chardin, Thomas Merton and Thomas Barry, she became a knowledgeable and low-key supporter of their thoughts long before many others.

From 1972 to 1984 Sister worked in MOES, Maryknoll Society’s Overseas Extension Service, a job that she totally enjoyed.  She held various titles in this work:  Assistant Director, Librarian, and Assistant Editor of the publication Mission Forum.  During this time, with advanced standing, she was able to earn a Master’s of Arts degree in Religious Studies in 1980 at the Maryknoll School of Theology.  Throughout her missionary life Camille Marie earned many certificates for courses taken in areas related to her work, including topics as varied as indigenous language studies, Library Management and Catechetical Development.

When the MOES office closed in 1984, Maryknoll Father Eugene Higgins, Director of the Office wrote to Camille Marie, saying “The missions in general and Maryknoll in particular have benefitted by the quality of your service.  Literally, thousands of missioners, Maryknollers and members of other institutes, became more effective missioners because of your response to their requests for assistance.  Hundreds of these missioners expressed to me their appreciation of the help you gave them….  Over the years, whenever anyone spoke in complimentary terms about MOES, I reminded myself that you were responsible for the improvements and developments that so much enhanced the mission value of MOES.”

In the years that followed, Camille Marie served in different positions at the Maryknoll Center, notably in the Maryknoll Sisters’ Development Department with the Mission Awareness Promotion Team and as volunteer liaison with Maryknoll World Productions.   In 1986 she assisted the committee responsible for Maryknoll’s 75th Anniversary Mission Symposium.  A letter from Maryknollers Sr. Janet Carroll and Fr. Richard Ouellette on behalf of the Committee said, “It would be difficult to find an adequate expression of appreciation for the long hours of preparatory work you did personally to make this event such a success.  Many people have expressed their thanks and amazement over the fine organization and smooth running of the Symposium.  This was due in no small manner to your contribution of planning and coordinating the Registration and Hospitality aspects.  You had the perfect combination of a professional and gracious spirit and picked an excellent team of Sisters to form the important ‘first impression’ for our guests as they arrived at Maryknoll!”

Many came to know Sister Camille Marie in her later years as a gracious and knowledgeable hostess for people from all walks of life who came to visit Maryknoll.   Of special note is the list she kept of the many individuals, Chaplain, students and others from Smith College who came regularly between 2002 and 2007, maintaining the connection between the Maryknoll Sisters and Mother Mary Joseph’s Alma Mater.   In an official capacity in 2010, Sr. Janice McLaughlin, then President of the Maryknoll Sisters, asked Sister Camille Marie to serve as hostess and contact person with David and Mary Hoysic in matters concerning Sr. Marie Pierre’s art work.  Until her death, Camille Marie treasured her role and friendship with David and Mary.

We welcome Maryknoll Father David LaBuda who will preside at this Mass of Christian Burial.