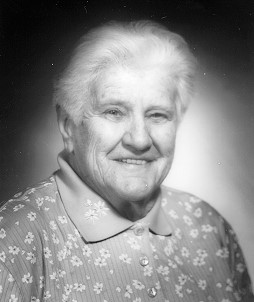 Sr. Claire Therese – the name she was given at Reception and retained for the rest of her life – was born in Cambridge, MA on November 21, 1922 and baptized Helen Rita. She was the second child of Mary McDonald Murphy and Patrick Murphy. Helen attended St. Peter’s Grammar School and St. John’s High School in Cambridge, MA, graduating in 1940 and going on to Burroughs Business School in Boston for one year. Immediately afterwards she applied to Maryknoll, the religious community to which she had been drawn ever since Maryknoll Fr. James McDermott‘s talk on Vocation Day when she was a Junior in high school. She had always thought of religious life, and once she heard the visiting priest talk about China, the Maryknoll Sisters, and Mother Mary Joseph, Maryknoll was her uncontested choice.

She entered Maryknoll on July 2, 1941, made her First Profession of Vows on March 7, 1944 at Maryknoll, NY and her Final Commitment on the same day three years later in Los Angeles, CA.  In 1946, Sr. Claire was assigned to the Maryknoll Children’s Home in Los Angeles, and when the Home was closed, she did part time ministry in both the Japanese and Latino communities until 1950.  Hoping for an overseas assignment at this point, she found herself instead en route to the Maryknoll Fathers Junior Seminary kitchen in Mountain View, CA.  Several times a week, she also did catechetical work in the migrant camps.

In 2011, as Sr. Claire reflected on her life experiences, she admitted that spending so many of her early years in the USA was disappointing at the time. But subsequent overseas mission assignments and Center service taught her to see life as a whole, that it mattered little where she was called to serve.

After one year in Mountain View in 1951, Sr. Claire was on her way to Hawaii. “Although my original assignment was to the Children’s Home in Maui,” she wrote, “I landed in St. Michael’s School in Waialua on Oahu and taught Kindergarten. The next four years were at St. Anthony’s in Kalihi, Oahu where I taught a different grade each year.” When Sr. Claire entered Maryknoll Teachers’ College in 1956, it was mainly the theory she needed to add to the teaching skills she had already acquired at the school of hard knocks!

Sr. Claire graduated with a Bachelor in Education in 1959. By this time, Hawaii had extended its mission presence further into the Pacific and eventually the Region became the Central Pacific Region. Sr. Claire was first assigned to Likiep, Marshall Islands, a mission she really loved, as we gather from her letter to Mother Mary Colman on January 22, 1960. “This is a wonderful mission and ‘tis good to be here.’ Even though it is a small island it is a very busy little spot and we are kept on the go with all the odd jobs that come along.” In 1961, Sr. Claire served as Assistant Superior and had that role again in 1965, in Majuro, also in the Marshalls after the mission in Likiep was closed.

After twenty years in Central Pacific Region, Sr. Claire felt the need for a change. Having written to Congregation President Sr. Barbara Hendricks of her intentions to volunteer for Congregational Services, she received a warm welcome and she settled happily in Data Processing. During those years, she taught two Adult Education classes – English as a Second Language and Citizenship – at Ossining High School, two nights a week. “A great experience,” she said, “Because those people really wanted to learn.”

Coming to the end of her commitment in Congregational Services in 1974, Sr. Claire set her sights on Africa. It is at the point of transfer of Region that Sr. Claire’s sensitive nature is most beautifully reflected. She wrote to the Sisters in Hawaii to thank them for her many years in community with them and for their promise of prayers for her. She also said that she knew her leaving would make more work for others. Sr. Claire really appreciated all the efforts the Sisters made to be there for one another. In turn, she was highly esteemed by the Sisters in Hawaii. They encouraged her new venture with a warm commendation. “Wherever Claire was,” they wrote, “she would try to make a success of any work she entered into, for she is industrious, resourceful and wholehearted.”

This is exactly what the Sisters in Kenya experienced in Sr. Claire in her nineteen years among them. She arrived in 1974, and after language study in Makoko, Tanzania, settled in Nakuru, Kenya where she joined the Sisters in their workshops for teachers of religious education in government schools. She contributed invaluably through the creative teaching tools she devised.

This experience was followed by Renewal in 1979 during which she did a quarter of Clinical Pastoral Education in Central Islip, NY.  Returning to Kenya, she moved to Kitale for a very different mission experience. There she helped the Sisters in the clinic, in the office, and in the house. Her culinary expertise was applauded everywhere she went. In 1983, she helped open the first Africa World Section house in Nairobi.

At the end of her next Renewal in 1986, she volunteered for another tour in Congregational Services, this time as supervisor in the General Secretariat. She returned to Kenya in 1989 for ongoing service at the World Section House where she remained until November 1993, at which time she returned to Maryknoll for bilateral knee replacement. In no time at all, she was on her feet with scarcely an observable limp, serving fulltime in the Hospitality Office at the Center.

At the conclusion of her term of service, in 2000, when she was 78 years old, Sr. Claire responded eagerly to another opportunity at Fond du Lac Reservation in Cloquet, MN.  Her transfer to the Western Region occasioned this recommendation from Rogers Council: “It is not easy to say ‘goodbye’ to Claire, but at the same time it is very easy to support her in her continued desire for active ministry.  Claire is a very responsible person whose helpful and joyful nature will be greatly missed here at the Center.” What the Center missed, Cloquet gained. Sr. Claire received multiple Certificates of Appreciation for her participation in the Reservation activities. When the Sisters concluded their ministry at the Reservation in 2007, Sr. Claire returned to the Center, this time to grace the Chi Rho Community with her ongoing service.

Today, we welcome with us our Maryknoll brother, Fr. Francis J. Breen, MM who will preside at this Memorial Mass for Sr. Claire.