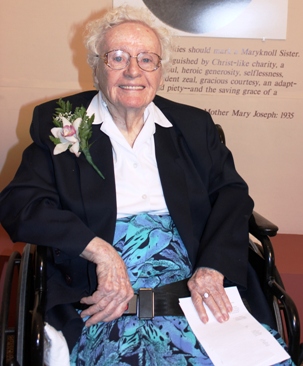 In John 1:47 Jesus said, “Now here is a genuine one of complete integrity—no guile.” On a wall hanging in Sr. Doretta’s room it says: “Sr. Doretta Leonard: Cheerful…Guileless…Friendly…Kind…Warm-hearted.” This description seems to be very much like what Jesus saw in Nathaniel and truly is a very apt description of our beloved Doretta.

On November 27, 2018 (at about 12:30 p.m.) Sr. Doretta Leonard peacefully and gently went home to God at the Maryknoll Sisters Center. She was 93 years old and a Maryknoll Sister for 73 years. Two days earlier Sr. Doretta was anointed and during the days that followed, her sisters accompanied her in loving vigils.

Anne Therese Leonard was born on June 26, 1925 to Mary Brunell and Anthony Leonard in New York City. As a child she was affectionately called Nancy. She had one brother, Edward. He and his wife, Dorothy Ann, had one daughter, Dorothy, who is with us this morning.

Anne Therese was raised in Queens, NY and attended Bishop McDonald Memorial High School in Brooklyn, NY. After graduation, she taught at St. Joseph’s School in Long Island for one year. She also attended Fordham University for a year and a half before entering Maryknoll. It was there at Fordham that she felt the call to the missionary life. The sacrifice involved appealed to her as a way of giving herself over entirely to the love of God though at that point she did not fully realize the deep and passionate joy she would find in carrying out her missionary vocation. Following her heart to enter Maryknoll was a beautiful example of her guilelessness.

Anne Therese entered Maryknoll in 1945. At her Reception into the Community she received the name of Sister Mary Doretta, a name she retained throughout her life. She made her First Profession of Vows on March 7, 1948, three years later on the same date she made her Final Vows. After her First Profession, she studied for a year at Maryknoll Teachers College. In 1948, she was assigned to Wuchow (Wuzhou), in South China. After arriving in China, she studied Cantonese for one year, and then she began her catechetical ministry which would last for fifty years. Sister Doretta wrote that, of all the work she did in China, she most enjoyed catechetical work: welcoming new Christians of all ages, from the young to the very old, to hear the Good News of peace and love.

In 1951 the Communist government placed Sister Doretta and other Maryknoll Sisters under house arrest for six months and expelled them from China to Hong Kong later that year. In September 1951 she began teaching kindergarten at the Maryknoll Convent School in Hong Kong. During that time thousands of Chinese people were leaving China and streaming into Hong Kong. Maryknoll Sisters were very much involved in reaching out to these refugees from Mainland China. In 1952 Sr. Doretta returned to doing her beloved Catechetical ministry at St. Teresa Church in Kowloon, Hong Kong. Through this ministry she not only prepared people for baptism, but also gave spiritual direction and visited them in their homes and in the hospitals, giving them whatever support they needed. She did this ministry in many different parishes in Hong Kong and Macau. Later in thinking back on her missionary life Sr. Doretta said, “Of all the work I do the type that I most enjoy is teaching catechumens. It is a rewarding and enriching experience to see people’s faith growing and developing.”

In 1968 Sister Doretta returned to Maryknoll and attended Mary Rogers College. In 1970 she received her Bachelor of Science Degree in Adult Education. Later that year she returned to Hong Kong where she continued her pastoral ministry until 2001, with the exception of one month in 1992 to study at the EAPI in Manila, Philippines where she received a professional certificate in Pastoral Studies.

During Sister Doretta’s many years in the China Region, she became involved in pastoral work in many different parishes in both Hong Kong and Macau. “After teaching catechism for nearly 50 years, I found that the preparation for classes, scripture study and spiritual reading has helped my faith to grow. The faith that grew in the hearts of the catechumens as they learned about God also greatly enriched me in my personal faith journey.”

We welcome our Maryknoll brother, Father Jack Sullivan, MM who will preside at this Liturgy of Christian Burial. We also welcome Sr. Doretta’s niece Dorothy.