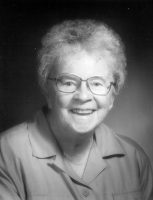 Sister Dorothy (Noel Marie) Doescher died after a short illness at home at the Maryknoll Sisters Center on Sunday, February 12, 2017. She was 91 years old and had been a Maryknoll Sister for 68 years.

She was baptized Dorothy Louise, and at her Reception into Maryknoll she received the religious name, Sister Noel Marie, which she herself had chosen.

Dorothy was born on January 10, 1926 to Louise (Hartigan) and George Doescher in Rochester, NY and she had two sisters, Virginia and Carol. Both parents and her sister Carol have predeceased her.

Dorothy discovered “foreign missions” for the first time at her high school, Nazareth Academy in Rochester, NY when two Maryknoll Sisters came for a Vocation Week. She later wrote “They were the ones to interest me in foreign mission work when they visited our school, showed us movies and talked about their mission work. I decided that day, when only a freshman, that I liked the Maryknoll Order and wanted very much to do foreign mission work.”

She graduated from high school in 1943 after which she worked at the Eastman Kodak Company as a clerk for five years. She had applied to enter Maryknoll in September of 1946, but her father died that year. Her two sisters were young teen-agers and her mother felt that she needed Dorothy at home. She attended night school at Nazareth College during 1947 to 1948 and entered the Maryknoll Sisters Novitiate at the Sisters’ Motherhouse in Ossining, NY on September 4, 1948. One of the Sisters at Nazareth Academy wrote to Mother Mary Joseph, “It was my happy privilege to be associated with Dorothy for the past six years. While still a student in school she was outstanding for her sunny disposition, loyal devotion to duty and generous cooperation in all school activities.” It seems that that “sunny disposition” got her into a bit of trouble in the novitiate because her “looking for fun all the time” was frowned upon by the Novice Mistress! Although Noel’s “sunny disposition” and “love of fun at all times” remained with her for her entire life, she was also a deeply spiritual, loving, sensitive, generous and dedicated Maryknoll Sister.

Sister Noel Marie made her First Profession of Vows on March 7, 1951 and her Final Vows on March 7, 1954, both at the Maryknoll Sisters Motherhouse. She studied for one year at Maryknoll Teachers College in 1950 to 1951 and then went to St. Catherine Labouré School of Nursing in Dorchester, MA where she earned her RN in 1954. Following graduation that same year, she was assigned to Kandy, Ceylon (Sri Lanka). There she worked with a team of 24 Maryknoll Sisters and government employees at a 600 bed government hospital. In 1959 the government decided against having Catholic Sisters working in their public institutions and the Sisters were forced to leave the hospital. Sister Noel was among the last to leave Ceylon in 1962.

After returning to the United States, Noel worked at Bethany, the Sisters’ nursing facility in Ossining, New York. In 1963 she was assigned to the Maryknoll Sisters’ hospital for Tuberculosis patients in Monrovia, CA. In 1968 she received her assignment to Kenya, East Africa where after a year of language study in Tanzania, she went to Kinango in the Mombasa Diocese of Kenya where the Kenyan Government requested help in setting up a much needed new hospital. Four Maryknoll Sisters were assigned. Noel Marie was one of them.

By 1972, at the request of the bishop of the El Doret Diocese, Sisters Noel and Paula Kuntz moved to Kitale, an agricultural town in the northern Rift Valley of Kenya. There, for the next 35 years, the two worked and lived their community life together, serving the neediest people of that area in numerous ways. On October 30, 1973, they opened a clinic 14 miles away at “Moi’s Bridge.” The clinic consisted of a one room, mud hut with one door and one window, no water or electricity. Noel wrote, “We bring water from home, though there is a pump about 40 yards away. But people keep coming even though we can admit only one person at a time”. In the years that followed they trained 21 young Kenyans and the clinic grew into an 11 room cinder block building. “In 1984 alone they treated 89,000 patients, providing maternal and child health care, dental care, a laboratory and natural family planning services.” Four days each week they loaded their vehicle with medical supplies and a team headed out to serve the sick in outlying areas. “It’s the busiest mission clinic in the country,” chuckled Noel. In 1984, the Sisters decided it was time to turn that work over to the Kenyan Assumption Sisters. “We’ll remain in a supportive role until we depart in May, 1985,” she said.

From 1986 until 2007, while still caring for the sick, the ministry became a pastoral one of working to lift people out of poverty through literacy classes and income generating projects for women. Wherever they saw a need, they helped: disabled children, the elderly, HIV patients and their families, food for the hungry and so much more. They spent their Sundays visiting outstations taking the Blessed Sacrament and praying with the people where there was no priest.

Sister Noel returned to the Maryknoll Sisters Center in 2007 where she volunteered doing clerical work in the Congregation’s Communications Office and delighting all of her co-workers with her ever present good humor right up until a few days prior to her death. Typical of her generous nature, Noel donated her body to science.

We welcome our Maryknoll brother, Father Frank Breen, who will celebrate this Memorial Mass for our Sister Noel Marie.