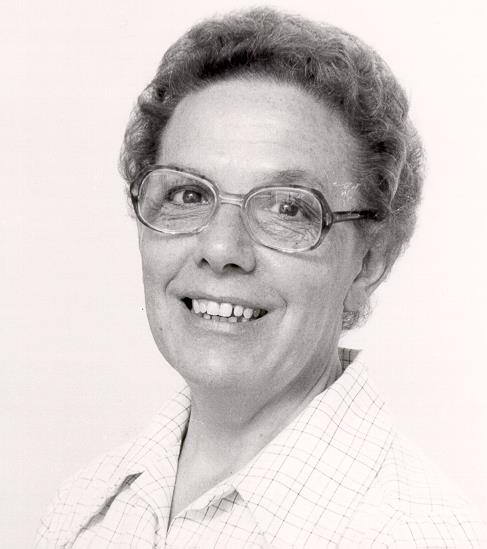 Welcome to this celebration of the life of our dear Sister Helen Scheel who passed away on January 4, 2016, at Maryknoll, NY. In the early morning hours, just as unobtrusively as she lived, Helen passed quietly into the arms of the God she served with such loving compassion. She was 87 years old and had been a Maryknoll Sister for 68 years.

Helen Mary Scheel was born on November 30, 1928, in Baltimore MD, one of three children. Her parents, Joseph A. and Julia Hintenach Scheel, and her brother Paul, have predeceased her. Helen attended Shrine of the Little Flower Grammar School and then graduated from The Catholic High School of Baltimore in 1946. She worked as a bookkeeper and stenographer in Baltimore before entering the Congregation in Valley Park, MO on Oct. 30, 1947. There she received the religious name of Sr. Paul Gerard though in the 1970’s she returned to her baptismal name. It was remembered of her secretarial skills that she was part of a team in the novitiate commissioned to record the classes, retreats and reflections given by Mother Mary Joseph.

Sister Paul Gerard made her First Profession of Vows at Valley Park in 1950 and was assigned to the Motherhouse that same year. In 1953 she made Final Vows at Maryknoll. She received her BE in Elementary Education from Maryknoll Teachers College in 1955. After graduation she was assigned to San Juan Capistrano, California where she taught Grades 2 to 8 for seven years and was the Local Superior and principal of the school for an additional four years.

From the summer of 1966 to the summer of 1967 Helen returned to the Motherhouse in NY as an assistant Juniorate Mistress. In this one, brief year she profoundly influenced the lives of the more than 40 young Sisters in her care, an impact that continues to be felt until today. One Sister commented: “In the chaotic years immediately following Vatican II, Helen was the calm in the midst of the storm. She was infinitely patient and unfailingly kind. Her fundamental trust and belief in us, as well as her open, deeply loving and non-judgmental ways held us in Maryknoll and taught us by example how to live this life we had chosen. While we never knew Mother Mary Joseph personally, we felt we truly experienced her spirit in Helen.”

On learning of her death there was an outpouring of love and appreciation from many of the women in that Group who had left Maryknoll but maintained a connection with her over the years. They wrote: “Helen’s loving kindness helped keep me tied to the spirit that keeps all of us connected to this day.” “She exuded love and compassion.” Her “constancy, care and loyalty leave traces of her footprints that we recognize, honor and hopefully – from time to time, emulate. [Her] beautiful stature [was] at once towering and grounded in understanding and tolerance”. “Helen is deeply revered and loved and is ALIVE in the 1962 Group.”

In the fall of 1967 Helen was reassigned to California where from 1967 to 1973 she served as the Local Superior at Monrovia as well as the Regional Superior of the Western US Region. One Sister recalled: “Helen’s kindness and spirit of fun were known to all. She sought the woe-begotten among us and spent a lot of time with them, so much so that we, who were young and healthy and loved to be with her, had to remind her of our presence!”

During this time she was also a teacher and coordinator of the Adult Basic Education Program of the City of Monrovia Unified School District. In addition, she completed her studies for a Masters in Adult Education at California State University in Los Angeles.

It became necessary in 1974 – before she completed her Master’s thesis – for Helen to return to Baltimore for Family Ministry. When she was assigned to the Eastern US Region, her California community of Sisters Rita Nixon and Marjorie Schnellinger decided to move with her. Someone remarked of them: “Together and separately they were an outstanding example of what it means to be a member of a Community: Supportive of each other in ministries, in personal and family needs; always available to assist neighbors, friends, members of the Congregation, without hesitation or concern for the demands on their own lives. Many Maryknoll Sisters in transition, in need of a place to heal physically or spiritually, were welcome in their home—without question, and for as long as needed.”

A former Maryknoll Sister affirmed this and added: “Those of us who lived near [them] benefited deeply from their friendship, prayer group, love and support throughout our lives. Their home and hearts welcomed everyone as they served and lived among the poor.”

Although in full time ministry to her ailing parents, Helen was also a member of the Governing Board for the Eastern US Region from 1983 to 1987, did Adult Basic Literacy Education and was passionately committed to working against injustice. One member of the Region said: “For many years Helen’s was the justice and peace face of the Maryknoll Sisters in Baltimore as she and Medical Mission Sister Mary Louise Lynch engaged in ministry that advocated for victims of poverty, war and other injustices…including travelling to Washington DC in all sorts of weather for demonstrations and prayer vigils.” Helen retired in 1997 but still worked on justice and peace issues and did tutoring until her return to the Maryknoll Sisters Center in 2007.

During her years in the Chi-Rho Community at Maryknoll, 2007 – 2013, Helen continued to volunteer as an English language tutor for a number of the non-English speaking members of the Center’s service staff. In November 2013, her deteriorating health led to her transfer to the Center’s Eden Community where she took the USA Eastern Region for her prayer ministry and where she remained until her death. In an act of typical generosity, Helen donated her body to science.

We welcome some of Helen’s friends who have joined us today and also our Maryknoll friend and brother Father Jack Sullivan to celebrate this memorial Eucharist with us.