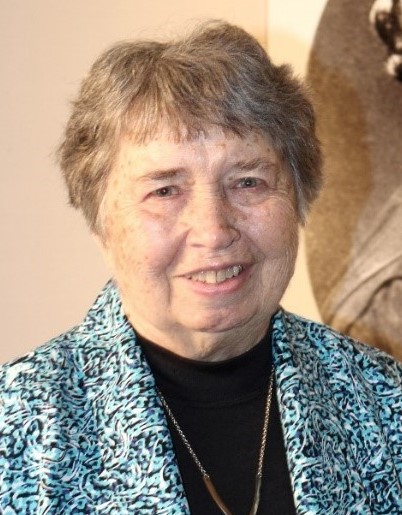 As quietly as she had lived, and with no one suspecting, Sister Jacqueline Dorr slipped away from us on Saturday afternoon, February 19, 2022, at the Sisters Center in Maryknoll, NY.  Sisters assembled quickly to pray by her bedside and to remember the friend who had enriched their lives with gracious good humor. Jackie was 92 years old and had been a Maryknoll Sister for 74 years.

Jackie was born on November 22, 1929 in Boston, MA, one of four children to Paul J. Dorr and Helen (O’Neil) Dorr. She had two brothers, Paul and Laurence, and one sister, Janice.  After grammar school, Jackie attended the Academy of Notre Dame in Boston, MA. Upon receiving her high school diploma on June 6, 1947, she enrolled at Simmons College, her mother’s alma mater, but stayed for one semester only.

By this time, she was already well acquainted with Maryknoll through the magazine that had graced the family coffee table for as long as she could remember.  She entered the Maryknoll Sisters Congregation at Maryknoll, NY on Sept. 4, 1948 and received the religious name Ann Bernadette at Reception. She made her First Vows on March 7, 1951 at Maryknoll, NY and her Final Vows on the same day in 1954, also at Maryknoll, NY. She resumed the use of her legal name in September 1971 when she returned to the Center for Congregational service. She would have liked to make this change sooner, but did not because, “my name Jacqueline is an unpronounceable mouthful to the Africans who have known me for years as ‘Sister Bernadetta’.”

We know Jackie as an Africa missioner, but beforehand, from 1953-1959, she did youth ministry in Boston’s Chinatown.  Accumulating academic credits along the way, she was granted her Bachelor’s degree in Education from Maryknoll Teachers College in 1959, the same year she was assigned to the Africa Region, to the country that was still known as Tanganyika.

Jackie’s first assignment was to Nyegina where she studied the local language of Kikwaya and engaged in pastoral ministry. In three years’ time, she would have to immerse herself in the study of Kiswahili and teach in girls’ middle schools. In 1965, with Sister Catherine Erisman, she opened Rugambwa Secondary School in Bukoba.  Jackie was able to handle different assignments at a moment’s notice, it seemed, and did all of them superbly well.

In 1971, she returned to Maryknoll for congregational services. She would do so two more times at suitable intervals during her mission life.  She first served the congregation in the Secretariat. Her next tour was in 1979, in the Mission Institute as Admissions Coordinator and Program Facilitator. From 1992 to 1996, she became Personnel Manager, recruiting and placing Sisters in Departmental positions at Maryknoll.  For her administration of each of these service positions, Jackie received high praise.

In 1974, after completing her service in the Secretariat, Jackie returned to mission in Kenya, the country in which she was destined to spend the remainder of her active life in mission and where her artistic flair would blossom. She helped to develop programs for which she designed the graphics. These were ongoing projects inclusive of Religious Education Seminars for primary school teachers and educational workshops for Nomadic Desert Peoples of Northern Kenya, as well as the completion of 150 posters for Developing in Christ, the religious education books prepared and published by the Pastoral Institute at Gaba in Eldoret.  In 1987, Jackie co-founded a very successful rehabilitation program for women ex-prisoners with another Maryknoll Sister. She also designed the graphics for an Oxfam project, Women, Law and Development, gave courses on women and the Bible, and authored Women Seeking Justice. The Catholic Archdiocese of Mombasa sought her permission to use her book, both English and Swahili versions, in their radio program, “Journey of Faith.” A correspondent from Lesotho, also thanked Jackie for, “such a good simple and useable resource for women’s groups!”

This brief paragraph encapsulates a lifetime of stellar achievements. Whatever Jackie set her mind to do, it flourished and gave boundless joy. You need to know that her talents included cartooning, an art with which she embellished many of her poems, as well as the book just mentioned. In our Regional newsletter, “Kenya Klippings,” she consistently put every Sister’s best foot forward, always with a touch of kindly humor. Jackie was also an exceptionally good writer.  Whether a letter or a report, everything she wrote read like poetry. And always, she was graciously unassuming.

Toward the end of the 1990s, while serving as Regional Coordinator in Kenya, Jackie began losing her sight.  An avid reader, Jackie lived with her disability with such grace that we seldom suspected how she might have mourned her loss.  An insight into what held her steady comes from her poem, “The Laughing God,” published in Emmanuel Magazine, in 1991.  It begins: “What else is ‘holiness’/ but a life lived for others / as well as for me!”

When Jackie sensed that her impaired vision was beginning to compromise her mission life in Kenya, she asked if she might continue “to live for others” with the Monrovia community in California.  Upbeat though she was, her letter of January 17, 2005 to the Sisters at Monrovia reveals something of how wrenching her decision to leave Kenya was for her: “As the time draws near,” she wrote, “I’m a bundle of mixed feelings. I’ve belonged to Africa for the last 44 years, 35 of which were actually lived in Africa itself, so it won’t be easy to cut ties, I’m thinking. But, I’m not one to live in the past and I very much look forward to moving to Monrovia soon after completing Renewal.”  At age 74, she was destined to enjoy twelve good years with our Sisters at Monrovia.

In 2017, sensing that it was time once again to pull up roots, Jackie asked to return to the Center to join the Chi Rho Community.  In 2019, she transferred to the Eden Community where she died.  Jackie requested to be cremated.  If one word only were to describe Jackie, it would be “refinement.” Jackie, a quiet and unassuming lady – who suspected how playful she could be ‘neath all that “Boston propriety?”

We are happy to have with us this morning our Maryknoll brother, Father Frank Breen, MM who will celebrate the Liturgy of Christian Burial.