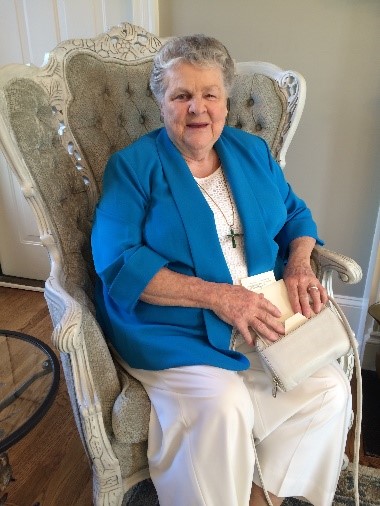 Sister Janet Catherine Carroll died on May 28, 2019 at the Cedar Manor Nursing Home, Ossining, NY. She was 85 years old and had been a Maryknoll Sister for 66 years.

Janet was born in New York City on July 22, 1933 to Ethel Rita (Waters) Carroll and Raphael Peter Carroll and had two brothers, Raymond and Arthur. Raymond predeceased her.

Janet graduated from St. Barnabas High School in the Bronx, NY and entered the Maryknoll Sisters Novitiate at Maryknoll, NY on September 2, 1952 from St. John the Evangelist Parish, Kingsbridge, in the Archdiocese of New York.

At her Reception into the Congregation, she received the religious name, Sister Mara Francis, but returned to her baptismal name after Vatican Council II. She made her First Profession of Vows on March 7, 1955 at the Maryknoll Sisters Motherhouse, Maryknoll, NY and her Final Profession of Vows on March 7, 1961 in Taiwan.  Janet received her BA in social service from New York University and in 1989, she earned an MA in International Affairs from Yale University.  In 1996, Janet received a PhD in Humane Letters honoris causa from Siena College.

Janet wrote part of her own biography: “In 1956, Janet was assigned to missionary work in Taiwan, ROC, where, after two years of studies in Chinese language, history and culture, she was engaged in a wide variety of urban/rural Socio-Pastoral ministries, in Youth ministry at the national level, and collaborated with the Jesuit Society in developing socio-economic leadership training programs for laity, religious, and clergy.  She served as national chaplain of the Young Christian Workers’ Movement, was Executive-Secretary of the Institute for Social Action and served as a member of the Social Apostolate Commission of the Chinese Bishops Conference.”

After ten years in Taiwan, Janet returned to the USA to study for her BA at New York University; she then returned to Hsinchu, Taiwan for four years as director of the Institute for Social Action. In 1972, she returned to the USA and began the graced time of putting her enormous gifts in service to the Congregation and the Church—in the field of academic, ecumenical Mission study and in efforts to learn about and support the Church in China.  She directed our Congregational Research and Planning Office from 1972-1978, traveling the Maryknoll world with Fr. Larry Egan, giving workshops and seminars on mission planning. In 1979, Janet initiated our Congregational presence at the United Nations as part of the Permanent Observer Mission of the Holy See to the United Nations, and for this she received the Papal Honor: Pro Ecclesia et Pontifice in 1987.

From 1989 until 2003, Janet was the Executive Secretary of the US Catholic China Bureau, facilitating education and outreach relating the Catholic Church in the USA to that in China. She edited the CHINA CHURCH QUARTERLY, coordinated the National Catholic China Conference and led many religious study tours to China.  At the same time, Janet facilitated and participated in many mission and ecumenical meetings in the USA and various countries around the world, while serving on many Boards such as the Overseas Ministries Study Center (2001-2008), ORBIS Books (1997–present), and the American Society of Missiology, in which she also served as president.  In this period, she partnered with Maryknoll Society in the effort to educate many Chinese sisters and priests, a work that will bear fruit for years to come. Her newest engagement was with the All-Africa Sisters Conference, Sister to Sister—a new experience for her and a great joy!

These are all achievements—what of the woman behind them? Janet was above all a woman of loyalty—to Maryknoll, to the Church, and to the people and Church of Taiwan and China, and to us, her friends and family. Her gifts were always at the service of those who needed them. She stood up fiercely for what she saw as principle—sometimes coming into conflict with friends and colleagues—but, even in the midst of the fray, they knew she loved them. She kept up with the movements of the Church in China until she died—devouring articles and lectures, writing fierce letters to magazines if she did not agree with their approach, and calling friends with whom she shared her passion for all things Chinese.

Janet made and kept friends from all over the world—as well as with her Maryknoll Sisters—her death leaves a large void in the community here. She had high expectations of herself and her stated hope as she neared the end of her life was that, when she died, she had left the world a better place, and she surely did that.

For many years, Janet was not in good health and, although she stayed in contact with the work she loved, she was in and out of hospitals and rehab centers and never really was physically strong again.   However, her mind and heart stayed active. The day before she died, she met with many of us Maryknoll Sisters, her niece Christine, and with Fr. Tim Kilkelly and the four Chinese priest-students—she ended as wanted, still engaged with her sisters, her family and with the Church in China.