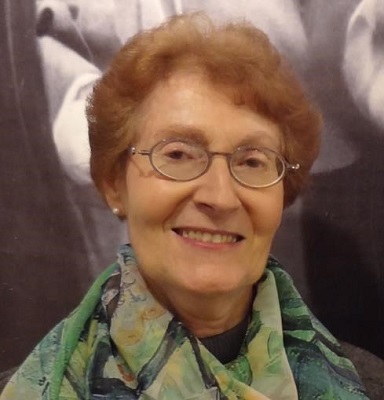 We come together today to mourn the death and celebrate the life of our Sister and friend Janice McLaughlin. Janice died on Sunday, March 7, 2021, at 4:00 A.M., ending a life fully lived. She was 79 years old and had been a Maryknoll Sister for 60 years. Desiring to be of service in death as she had been in life, she generously donated her body to science. Janice was gifted in many ways but what we remember best today is how she deeply touched our lives and the lives of so many people, especially in Africa.

Janice McLaughlin was born in Pittsburgh, PA to Mary Louise (Schaub) McLaughlin and Paul McLaughlin on February 13, 1942. She had one sister, Mary Ellen Mansfield who predeceased her.

Janice attended both Elementary and High School in her home parish of St. Lawrence O’Toole in Pittsburgh, graduating in 1960.

Always hoping to go to Africa, Janice was more than ready to receive her first mission assignment to Kenya. While studying Kiswahili at the Language School in Musoma, Tanzania, finding herself on the shores of Lake Victoria, she reflected that a childhood dream had come true, a dream that had grown out of a punishment in fourth grade when she had been caught talking in class. Telling this on herself, she said she had been made to copy a page from her geography book many times. “As I gazed at the photo of elephants and giraffes grazing at the foot of Mt. Kilimanjaro,” she said, “I vowed I would one day see this scene in person. Sixteen years later this dream came true.”

After language school, in 1970, Janice’s first assignment was as Communications Coordinator for the Catholic Church in Kenya, where she was responsible for press, radio, television and audio-visuals. In 1977, she received a request from the Rhodesia Catholic Bishops’ Justice and Peace Commission to go to war-torn Rhodesia to serve as Press Secretary. After much reflection and discernment with her community in Nairobi, she went with their support, blessings and prayers, arriving in Rhodesia on May 30, 1977.

Part of her work was communicating the situation to the wider world and she therefore, immediately began compiling a series of fact papers about the war, published as “Rhodesia – the Propaganda War.” The Smith regime soon enough closed in on the activities of the Catholic Commission and, on September 1, 1977, Janice was arrested together with her colleagues, all of whom were granted bail except herself.

Before Janice died she had left a note in her file, to be opened at her death.

“I want to share one of the most significant experiences in my life. I only told a few people about it as I felt that to talk about it would somehow dilute it or draw attention to me.

“It happened in September 1977, a few days after I was arrested and detained in Chikurubi Prison. One night I lay on my bed, feeling very helpless, scared and miserable. I tried to recall what I had written in my diary that had been seized by the police. I worried that I might have gotten others into trouble through my naivety and stupidity. I started to cry, deep, wrenching sobs from the deepest part of my being. The tears would not stop.

“As I lay there sobbing, I noticed a dim yellow light in the corner of the room. It moved closer to me and became brighter and I could feel a warmth and peace flowing from it. The light, a kind of misty, hazy golden glow shaped like a halo around a person, stopped by the right side of the bed. A voice came from the light, saying ‘You are the stupid, silly little girl whom I love.’ I did not hear the words spoken aloud but within me. I felt a great peace and comfort. All fear and self-pity left me. Gradually the light moved back to the right hand corner of the room until it faded away completely.”

On September 13, she was charged with violations of the Law and Order Maintenance Act. The trial was set for September 29, but before it could happen, most likely because of International pressure—many people from all over the world had been urging her release—the charges were suddenly dropped and she was deported.

Back in the United States, Janice lobbied against local Pittsburgh corporations that violated UN sanctions against Rhodesia. Seeing the amount of negative publicity Janice received in the local media, her mother asked, in her usual forthright manner, “When are you going back to Africa?” The perplexed expression on her daughter’s face prompted her to continue: “Well, when you speak out in Africa, you’re a hero. When you do it here, you’re only a trouble-maker.” After serving one year in the Washington Office on Africa, Janice was ready to return to Africa. Her life-changing prison experience had prepared her for the changes that lay ahead. In 1979, she was called to accompany Zimbabwe refugees living in Mozambique. This ministry enabled her to use her many gifts in the field of education, development and leadership training.

In 1991, she was assigned to serve as Communications Coordinator for the Maryknoll Sisters. With the completion of that contract, she returned to Zimbabwe to be a training coordinator for Silveira House, a leadership training and development center run by the Jesuits for the poor and marginalized.

Janice earned her Doctorate in Philosophy at the University of Zimbabwe, in 1992. Her Thesis, “The Catholic Church and Zimbabwe’s War of Liberation: 1972-1980”, was published by Baobab Books, Zimbabwe, 1993.

In 2008, when Janice was elected President of the Maryknoll Sisters for a six-year term, her good friend and colleague, Bishop Dieter Scholz, SJ, offered her this advice from his own experience: “Ultimately the only wisdom guiding our reflection and decisions which makes sense is the ‘foolishness of the cross’.” During her time in office, Janice received two honorary doctorates, one from Marquette University, Milwaukee, WI, in 2010, and the other from Albertus Magnus College in New Haven, CT, in 2014. Among the many awards Janice received, the South Africa Council of Churches recognized her in 2008 as follows: “In appreciation for the sacrifices that you and your family made in the struggle for freedom, justice and democracy in South Africa.”

In 2009, Orbis Books published her bestseller, Ostriches, Dung Beetles, and Other Spiritual Masters for which the U.S. Catholic National Press awarded her first Prize in 2010.

On completion of her term of office at Maryknoll, she returned to Africa, continuing to offer her service to the peoples of Zimbabwe. She also chaired the Africa Forum for Catholic Social Teaching (AFCAST), an Association of Justice and Peace Practitioners throughout East, Central and Southern Africa.

This letter barely touches the richness of Janice’s legacy. She will live on in our hearts through her own words on her Golden Jubilee: “Let us continue to raise each other up as God has raised each of us and enabled us to stand on many mountains and cross many seas to do things we had never imagined possible in so many parts of the world.”

Sr. Janice’s ashes will be interred in the Maryknoll Sisters Cemetery at Maryknoll, NY at a later date.

We thank Rev. Raymond Finch, MM, Superior General of the Maryknoll Society, for presiding at this Mass of Resurrection. Gratitude to Sr. Mary Ellen Manz, who read the letter, and those who made the virtual participation possible from here in Annunciation Chapel.