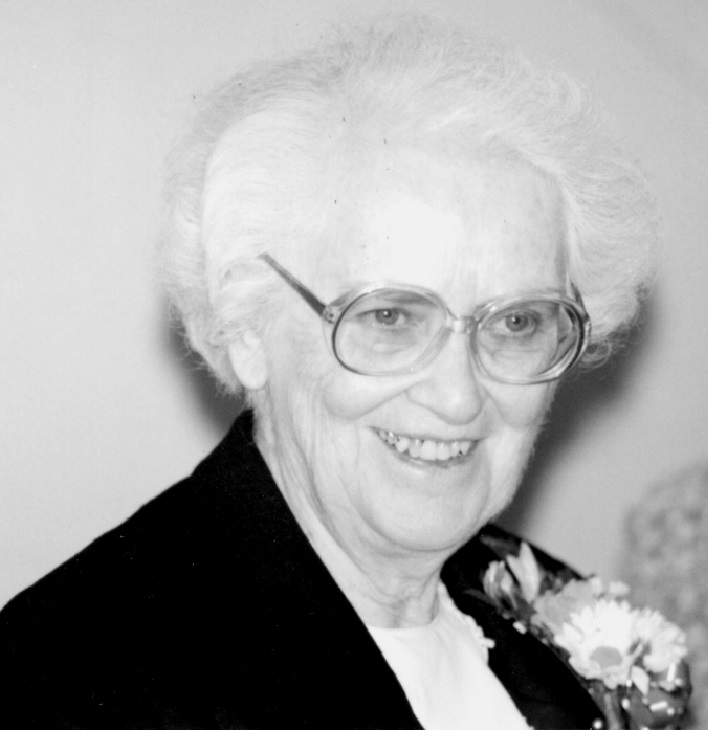 Helen O’Hagan was born in Brooklyn, NY on April 4, 1917 to John and Catherine Mullan O’Hagan, one of eight children. She attended St. Ephrem’s Grammar School and graduated in 1934 from St. Saviour’s High School in Brooklyn. After high school, Helen attended C.F. Young Secretarial School. With this training, she worked for four years as a legal stenographer and typist in Manhattan. Looking back on those years, Sister Joan Catherine said, “I have never been able to put my finger on any special time or event and say ‘That’s when I discovered my vocation.’ I think it was a very gradual thing. As all young people, I had thought a great deal of what I would do with my life, and of course, considered becoming a religious. It took four years, however, before I decided that perhads God really did want me to become a Maryknoll Sister and set out to do something about it. On December 8, 1940 (with about six of the O’Hagan clan in attendance to make sure I reached there safely), I went to Maryknoll to begin my new life.”

At reception, Helen received the name Sister Joan Catherine. She made her first profession on June 30, 1943 and her final profession on the same date in 1946, both at Maryknoll. After the novitiate, Sister Joan Catherine used her secretarial skills in the Promotion Department. She recalled that time as an experience she treasured, because it gave her the opportunity to know Mother Mary Joseph personally and develop friendships with the many Sisters at the Center. She said of those times, “It is the friendship of our Sisters which really doubles the joys and lessens the sorrows we all meet in life. The comradeship of Maryknoll Sisters is a real treasure.”

Sister Joan Catherine received her mission assignment to Fushun, Manchuria in 1946. She wrote that her mission life was short-lived because five months after her arrival she had to leave Fushun when fighting between Communist and Nationalist soldiers broke out close to the mission. For the next several years, Sister was forced to move from place to place. In March 1951, she and other Maryknoll Sisters were placed under house arrest for seven months, and then were sent out of China to Hong Kong. Sister Joan Catherine remained in Hong Kong for almost two years working mostly with refugees who flocked there from China. She was also able to employ her secretarial skills in the Sisters’ school office.

From 1953 to 1957, Sister Joan Catherine was involved in pastoral work with the Chinese in the Island of Mauritius in the Indian Ocean. Returning to Hong Kong, she helped the work of the Vestment Department, which was started by the Sisters to provide gainful employment for many of the women refugees from China who were skilled in embroidery. The sale of these vestments in the United States also helped to support the Sisters’ other works in Hong Kong.

In 1962, Sister Joan Catherine was assigned to Toufen, Taiwan where she was involved in pastoral work. She described her ministry as mostly home visiting in the parish and meeting with groups of all ages. She wrote, “I console, counsel, listen, encourage, and try in all ways to witness to God’s love.” Three years later, she was asked to return to Hong Kong for a year to assist once again in the Vestment Department.

Sister returned to the Maryknoll Sisters Center in New York in 1966, where for five years her secretarial skills were placed at the service of the Maryknoll Society’s General Council. Besides this full time work, she also served on the Sisters’ Center Council. In 1971, when she finished her work with the Society’s General Council, Sister Joan Catherine requested to study at Rogers College where she obtained a BA in Community Service.

Returning to Taiwan in 1973, she learned the Hakka dialect and spent the next fifteen years in pastoral ministry. This ministry included home visiting, visiting the sick in the hospitals and teaching adult education. At the same time, Sister served as the Regional Bookkeeper. In 1988, before returning to New York for Congregational Service, Sister Joan Catherine visited China, where she began her mission life. In an account of this visit, she mentions how the experience will stand in her memory for a long time. She was deeply touched by reception of the people and was delighted to reconnect with so many friends after being separated for thirty-seven years.

Sister Joan Catherine gave Congregational Service in the Archives as Assistant Director until 1992. Upon completion of her contract, she continued to service in the Archives for nine more years, until failing health led her to retire in 2001. In speaking about this ministry, she said, “I enjoy the Archives work for its ability to keep me in touch not only with our roots but also the day-to-day living out of our mission charism through all the records that pass over my desk.”

Sister was always open to change. Reflecting on the changes she had seen in sixty years as a Maryknoll Missioner, she wrote, “When I entered Maryknoll, and also when I first went to China, the theology/missiology was ‘bringing the faith to pagan souls who would otherwise be lost’. I found very soon that in practice I was receiving so much from the Chinese people. The truer understanding of mutual evangelization sits right with me and I feel much more free.”

On the occasion of her Golden Jubilee, she was asked to sum up the essence of her missionary life and what made it all worthwhile. Her response was, “The essence of my missionary life is hard to express, but I think it is to be able to deepen my relationship with God, to live a simple dedicated life without all the superficial, meaningless trappings of so much of modern life, and to be free to love and be of service to others that makes my life very worthwhile.” Sister Joan Catherine certainly lived out those words of live and service throughout her many years as a Maryknoll Sister as she touched the lives of people in Hong Kong, China, Taiwan, the Island of Mauritius, and the United States. We are grateful for her life with us.