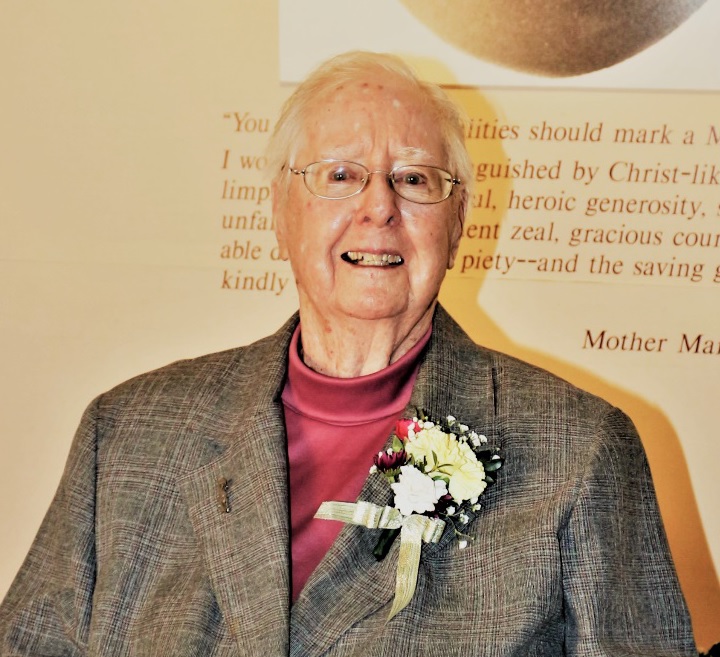 “In the evening, there is sadness, but with the dawn rejoicing.” Ps 30.  On April 28, 2022 Sr. Joan Delaney heard the dawn call and entered peacefully into her new life with God at 5:00 AM in the Maryknoll Sisters Home Care. Sr. Mary Ellen Kerrigan was by her side and they were joined later in prayer and song by many of her sisters and friends from the Hong Kong region.

Joan Frances Delaney was born on March 31, 1930 in Yonkers, New York to Patrick J. Delaney and Catherine Manning Delaney.  Her high school diploma is from Warren Harding High School in Bridgeport, CT in 1948. In 1952, after graduating from Albertus Magnus College in New Haven, CT with a degree in sociology and economics, Joan entered Maryknoll from St. Mary Parish in Milford, CT.  She professed her first vows in 1955 at the Maryknoll Sisters Center, NY and her final vows in 1961 in Hong Kong.

What follows is a formidable list of ministries, which called to her enthusiasm for mission: Sr. Joan’s first mission assignment in 1955 was to Hong Kong where she served in education and research for 20 years.  After teaching for eight years at Maryknoll Convent School, she accepted a position in the sociology department and the graduate school of education at Hong Kong’s Chinese University.  In her spare time she became involved in planning a new residence hall to be staffed by the Maryknoll Sisters and Jesuit priests.  In 1974, she began teaching at the Hong Kong Holy Spirit Seminary and also agreed to do research for the diocese of Hong Kong.  During this time she earned a Diploma in Education from the University of Hong Kong and also an M.A. in Comparative Education from London University.

In 1976, Sr. Joan relocated to Rome as Director of SEDOS, a mission documentation and study center serving 45 Catholic missionary communities.  During this time, she was a Vatican delegate to the World Council of Churches (WCC) Mission Conference in Melbourne, Australia.  In 1981 she took a six-month assignment to Poona, India in order to set up the documentation department for Ishvani Kendra, a mission center founded by the Missionaries of the Divine Word.  In 1982-1983, she lived in Washington D.C. where she worked at the Center for Applied Research in the Apostolate (CARA).

Sr. Joan was appointed by the Vatican in 1983 as the first Roman Catholic consultant on mission to the WCC.  She became a staff member of the Commission on World Mission and Evangelism (CWME).  She served six years in this post in Geneva, Switzerland.  In 1983, she was a Vatican delegate to the General Assembly of the World Council of Churches held in Vancouver, Canada.

In l990, after attending the Global Forum on the Environment in Moscow, she returned to the Maryknoll Center to work in the Department of Research and Planning.  During this four-year term, she facilitated meetings in Rome, Guatemala, Ecuador and Peru.  She continued her ecumenical involvement by giving talks and becoming a member of the Anglican–Roman Catholic Dialogue for the Archdiocese of New York.  Her last task in the department in 1994 was to go to Albania to research a short term commitment for Maryknoll Sisters.  This work resulted in Maryknoll Sisters serving in Albania for more than twelve years.

In 1995, Sr. Joan spent one semester as a scholar in residence at the Ecumenical Institute at St. John’s University, Collegeville MN.  In 1995-1996, Joan was a resident scholar and staff member at the Overseas Ministries Study Center (OMSC) where she was engaged in several important ecumenical projects.  During the 1990s Sr. Joan was a participant in the Catholic—Southern Baptist Conversations.  In 1999, she attended the Missionary Congress for the Americas in Argentina.

In 2001, she moved from West Haven, CT to Chicago, IL as administrator of the Global Center for Ministries at Catholic Theological Union.  During this time, Sr. Joan was involved in discussions about a national organization which would include both Catholics and Evangelicals.   This resulted in the founding of Christian Churches Together in the U.S and included five families:  Orthodox, Historic Protestants, Catholics, Evangelical and Pentecostals, Black and Ethnic Churches.  In 2006, she was a Vatican delegate to the 40th Anniversary of the Joint working Group in Geneva.

Finally, recognition of a valued alumna occurred in 1989 when Sr. Joan received an Honorary Doctor of Humane Letters from her Alma Mater, Albertus Magnus College, and New Haven, CT “for her fine contribution to the universal mission of the church and to the ecumenical movement on the international level”.  Further in 2000, she was given the Fitzgerald Award from the National Association of Diocesan Ecumenical Offices for “outstanding work and service to Christian Unity”.  And, in 2007, Cardinal Francis George presented her with the Chicago Archdiocesan medal for her significant contribution to mission and to Christian unity. Joan received many other awards for her scholarship, research and her outstanding capacity to network and link people of vastly different views and sects.  She said once; “If you find people with whom you disagree, share a meal and good bottle of wine”.  Suffice it to say that her many contributions to mission were recognized internationally and deeply appreciated.

From 2007-2013, Joan shared life with the Maryknoll Sisters in Monrovia, CA before returning to the Chi Rho Community here at the Maryknoll Sisters Center in 2013. After a recent hospitalization Joan made the decision herself to move to the Eden Community on March 1, 2022, where she was cared for with love, and supported in her last days.

We are grateful to have with us our Maryknoll brother, Fr. Timothy Kilkelly, MM, who knew Joan in Hong Kong, and will join us as presider for our Liturgy of Resurrection.