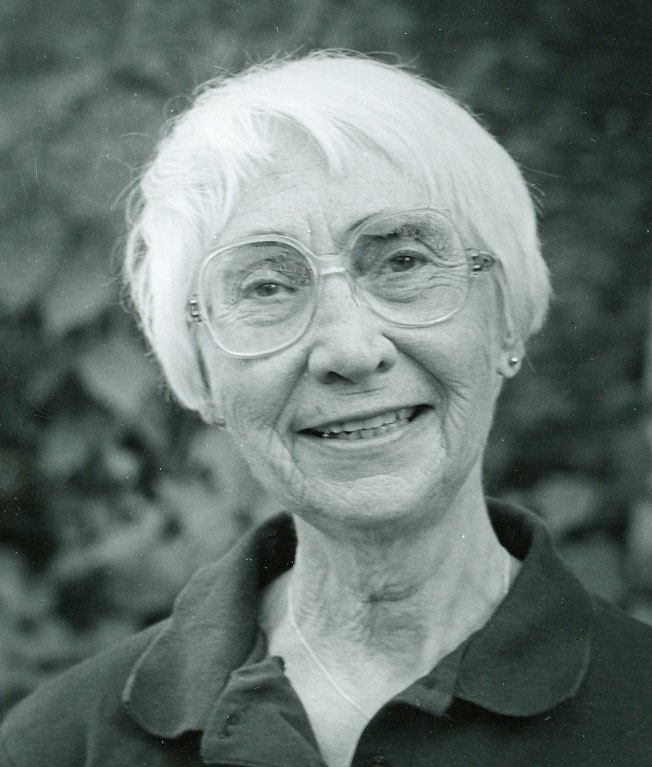 On November 6, 2019, Sister Joan Marie Peltier celebrated her 100th birthday. Four days later, on November 10, 2019, early in the morning, Sister Joan’s long, fruitful, earthly journey, one that had been an inspiration and blessing to so many, came to the end.

Joan Marie Peltier was born on November 6, 1919 in Milwaukee, WI. She was the eldest of the ten children in the family. At the time of her death, Sister Joan was survived by two sisters and two brothers. Her parents and other siblings have pre-deceased her.

All the Peltier children attended Immaculate Conception Parish Elementary School. It was an assignment given by a Mercy Sister in sixth grade that decided the future of Joan’s life. The teacher had asked the students to answer the question: “What do I want to be when I grow up?” “In thinking this over,” Joan said, “I realized that I wanted to be a missionary Sister. My teacher gave me a copy of The Field Afar and then I knew what I would do.” After grammar school Joan attended Mercy High School in Milwaukee graduating on February 3, 1937.

She joined the Maryknoll Sisters on June 10, 1937 at the Motherhouse, Maryknoll, NY. Apparently, Joan was struck by what she encountered here. Years later she wrote: “My early impressions [of Maryknoll] were: tremendous kindness, a spirit of joy and fun, becoming part of another family,” all qualities that Joan herself possessed and mirrored so clearly throughout her life.

In the 1940s much of the world was suffering from the ravages of World War II.  The Maryknoll Sisters who had been on assignment to Asia and China, in particular, were either in prison camps, under house arrest or repatriated to the United States. A huge part of the mission world was closed. God, however, was opening doors in other parts of the world for Maryknoll: Latin America and Africa.

In 1942 Rome asked the Maryknoll Fathers to send priests to Bolivia. The Fathers requested help from the Sisters. On March 18, 1943, Sisters Mary Kateri (Joan) and Magdalene Mary McCloskey were the first to arrive. They were soon followed by Sisters Jeremie Crowley, Mercy Hirschboeck, Paula Sullivan and Maria Natalis, (Cecilia) Ruggiero.

Sister Joan ministered in Bolivia continually from 1943 to 1966 in Riberalta, Cobija, Guayaramerin and other small jungle towns. She was 24 when she was missioned to Bolivia, and only 28 when she was appointed Superior in Cobija. Four years later, she was appointed superior in Guayaramarin and finally Regional Superior of what had become the Bolivia/Peru Region.  In all, by 1966, Sister had served in positions of leadership in Latin America for 19 years.

In 1967, after a year of service in the States, Sister Joan returned to Latin America. This time to Peru, where she taught briefly in Santa Rosa School in Lima.  She then moved to Arequipa where she was involved in pastoral-catechetical work.

From 1973 to 1975 Sister Joan gave service at the Center working as Food Service Liaison and in the Research Department. She remained in the States and joined the Eastern Region. First she worked in Breckenridge, TX functioning as Associate Pastor in a rural area serving Catholic communities in five towns. She then joined Sister Grace Krieger in St. Louis developing programs for the disabled in the St. Louis, MO Archdiocese. From 1990 to 1993, Sister was assigned to take care of the Maryknoll Sisters house in Chicago. This house was the home base for the Sisters in promotion. There, she also provided clerical service to the Eastern US Regional Administration.

In 1994 the Bolivia Regional Governing Board invited Joan to return to Bolivia to serve as Administrator of the Center House, Casa Rosario in Cochabamba. Sr. Rose Christopher McKeegan, Regional Communicator, wrote to the Central Governing Board, “Joan is well known to many of the Sisters in the Bolivian Region and it is thru direct invitation from them that Joan has been invited back…She is a very good hostess, very welcoming. Casa Rosario is a home away from home for the Sisters of the Bolivian Region and Joan will be a wonderful addition to our Region.”  Sister Joan served as Administrator of Casa Rosario through 1996.

On her return to the States, Joan became a member of the semi-retired Maryknoll community in West Haven, CT. Later she joined the Yonkers Maryknoll Sisters Community providing volunteer assistance where needed.  Whenever possible, she helped the Maryknoll Affiliates NYC Subway Group.

In 2009 Sister Joan turned 90 years old, and saw the need to move to the Maryknoll Center. Her transfer became effective on June 1, 2009.

In their recommendation to the CLT, the Eastern Region Coordinating Team wrote in part: “Joan has a gentle presence and a deeply listening heart. She is the soul of kindness and is generous and always willing to help. Joan also has a wonderful sense of humor, and is easy to get along with. For many years she has helped make being in the Eastern US Region a delight for others, and to be “at the heart of mission.” Wherever she is, she will be a wonderful addition.”

And so today, we gather to celebrate Sister Joan Peltier’s long life, a life well-lived with many people well-served.

We welcome with us this morning our Maryknoll brother Father Joseph Everson, who will preside at this liturgy of Christian burial.