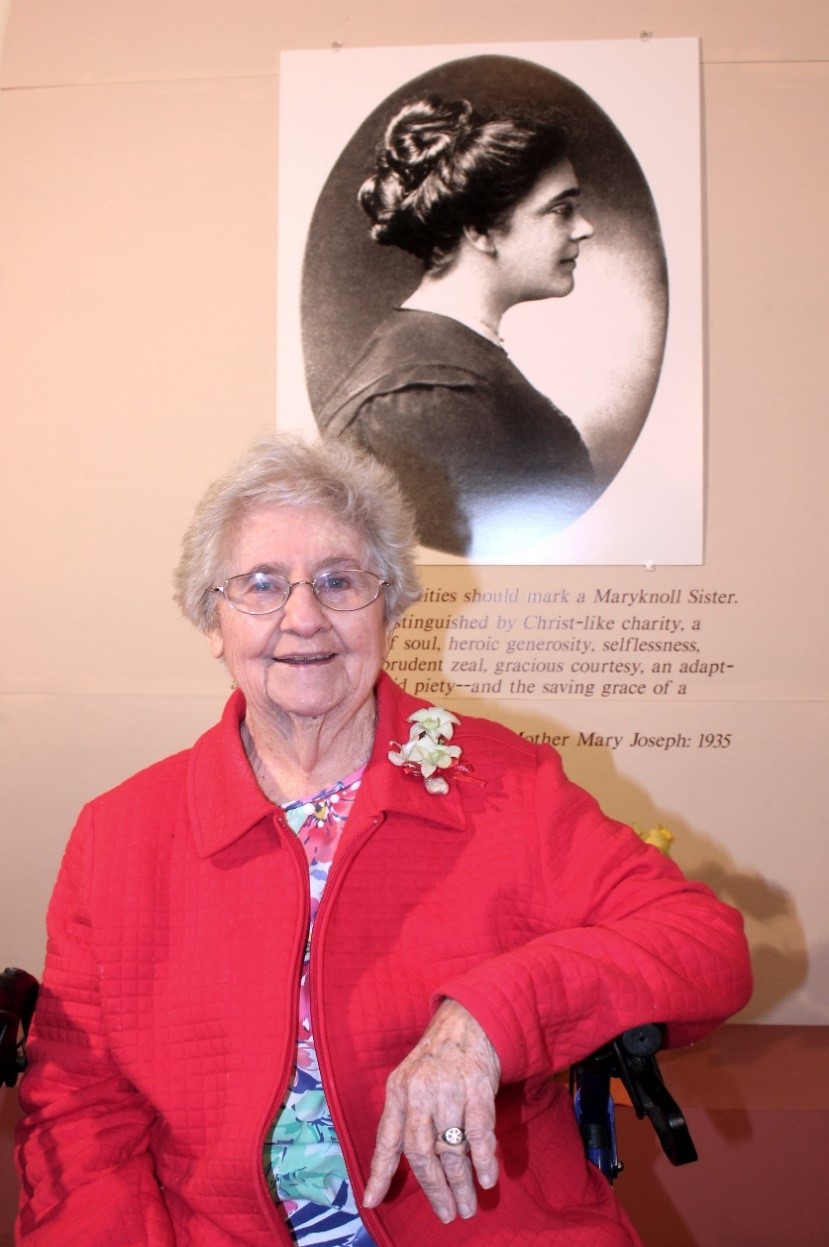 Shortly before Elsbeth Joanne McMahon came to Maryknoll, someone wrote for her “An Ode to the Giver of Inspiration”. When a 10-member planning committee formed for the future Yap Catholic High School, Joanne’s specified role on the committee was For Inspiration. A niece recently wrote: “She changed the dynamics of every event into something more meaningful and willingly impacted the trajectory of each of our lives. We became more thoughtful, conscientious and worldly because of this remarkable human.”

Elsbeth Joanne McMahon was born in Brookston, MN on March 28, 1925. She was one of six daughters born to Blanche and Francis McMahon. Her parents and sisters have pre-deceased her. Elsbeth’s early life was on a rural farm. Because of farm loss due to fire, the family bought and ran a hotel in Duluth, offering her another social reality. After graduating from Sacred Heart Cathedral High School in 1942, she worked as a bookkeeper and then as a parish secretary. Her youth held many opportunities for adaptability and preparatory gifts for mission.

The Field Afar and the encouragement of her parish priests sparked Elsbeth’s interest in mission. In October of 1946, she entered Maryknoll Sisters from Sacred Heart Cathedral Parish in the Diocese of Duluth. She was given the name Sister Francis Xavier at Reception and kept that name until 1967 when she stated she would henceforth be known as Sister E. Joanne McMahon. Her First Profession of Vows was in 1949 and Final Vows in 1952, both in New York.

Sister Joanne earned a Bachelors in Education Degree from Maryknoll Teacher’s College in 1952. She embraced on-going education by attending the East Asian Pastoral Institute in Manila, and taking any workshops that would enhance her ministry and up-date her with changes in theology. She was an avid reader and grateful for materials that were sent to her, no matter how long the transit took.

In 1952 she became part of the Maryknoll Sisters Philippine Region, with an assignment to Koror (Palau) in the Caroline Islands,
Micronesia. In 1972 her regional affiliation switched to the Central Pacific Region and to Micronesia in 1995, all while she remained on Yap.

Thus began her amazing 59 years of remote Pacific island living. While in Koror, Sister Joanne taught elementary school at Cardinal Mindszenty School and staffed catechetical camps in the summer. She also made several trips to Yap during those years.

In 1964 she relocated to Yap, still in the Pacific waters but with such different realities. She took important time for language and cultural studies that eased her into her special presence for the years ahead. On Yap, she served as principal of St. Mary’s Elementary School, taught part-time and was instrumental in having Yapese staff trained as teachers and for administration. In those first years on Yap, Joanne also ventured into home-visiting and began Religious Education. By 1973 she was full-time in Pastoral Ministry with an emphasis in Catechetical Education. She collaborated closely with the Jesuits during all her years in Micronesia. She believed in and worked toward formation of Small Christian Communities and trained for self-sustaining ministries. Social issues affecting family life and the impacts of alcohol abuse were concerns she helped address. She kept aware of the needs of youth and implications of new exposures from a wider-world on this small island nation.

Joanne was a great advocate for Yapese to have greater capacity and credibility. Her efforts are still in evidence in the church and schools in Yap today.

Joanne lived in community with other Maryknoll Sisters, and occasionally, with sisters from other congregations. In the early 1980’s she asked to move alone to the village of Tamil to live closer to the people. A ready smile comes when we imagine her in her small grass-roofed house and our hearts lighten thinking of how she loved to dance anytime! We know she is part of a multi-generational legend on Yap – with students, catechists, government officials, volunteers that served there and many friends. Her weekly letters to family, spanning almost 25 years, bridged her life in Micronesia and the US in such warm, interested and familiar ways.

Joanne traveled through the years by planes, boats, jeeps and on foot in simple rubber sandals. She continued to grow deeper into her call as a faithful missioner. In 2011, the year she returned from Micronesia to our Center to retire, she wrote: “The initial core response changed and grew into the realization that the call was as importantly a journey within to ‘be’ the person God created as I deepened my relationship with the Triune Creator.” On November 8, 2020 at 6:10 PM in the our Maryknoll Sisters Residential Care, Sister Joanne McMahon, at 95 years of age, open and ready, quietly journeyed into eternity.

At the top of those weekly letters was this: “Ecce Ancilla Domini”, Behold the Handmade of the Lord. God was surely her inspiration and her joy.

We express our warm condolences to her family of the ‘next generations’ who know Joanne affectionately as “Sissy”, and to her friends scattered around the world.

We welcome here with us, Maryknoll Father Daniel Kim as celebrant of this Mass of Christian Burial.

KAMMAGAR – Thanks to all who remember and celebrate and are inspired by God’s gifts through Sister Joanne.