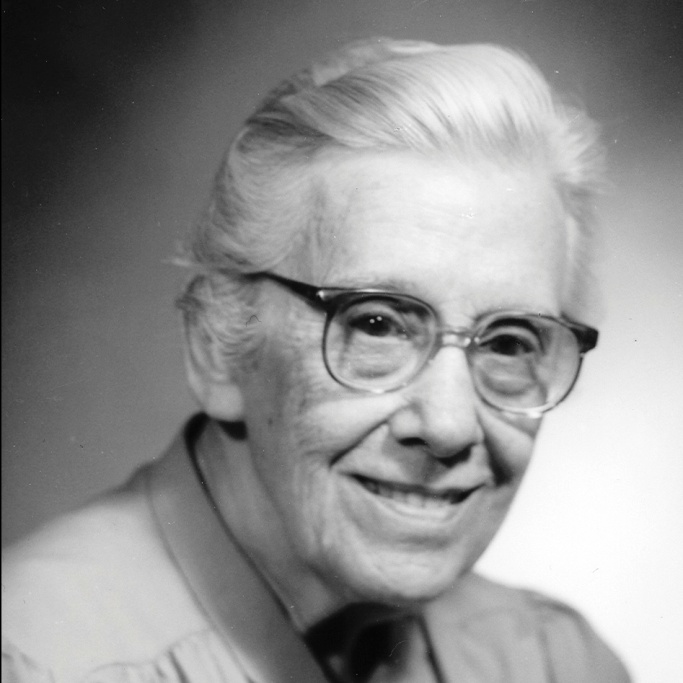 Madeline Cecelia McHugh was born November 9, 1920, in Elizabeth, NJ, the fourth child of seven born to Mary (Seraphin) and Matthew McHugh. Madeline knew she had a call to religious life from her sophomore year of high school at Sacred Heart in Elizabeth, when she heard a missionary priest speak about his work in India.

On June 10, 1939, Madeline entered Maryknoll from Blessed Sacrament Parish in Elizabeth, NJ. At Reception, January 6, 1940, she received the name Sr. Alma Therese.  In the late 1960s, she took the option of returning to her baptismal name Madeline. She made her First Profession of Vows on January 6, 1942, and her Final Profession on January 6, 1945, at Maryknoll, NY. In 1941, she attended Maryknoll Teachers College and graduated in 1945 with a Bachelor Degree in Education. Madeline also earned a Certificate in Theology from Iona College, New Rochelle, NY.

Her first assignment was in 1945, teaching Grades 2 and 5, as well as teaching shorthand and art to high school students in Wailuku, HI, where she also earned a Certificate in Speech from the University of Hawaii. In 1961, she returned to the Sisters Center, where she worked as a Secretary in the Vocation Department, and in 1965, she became Director of Vocations, a position she would hold until 1968. Sr. Madeline was then assigned to Guatemala, where, following five months of language school, she was engaged in pastoral ministry to women in Huehuetenango from April-October 1969.  She was then assigned to Panama, where she taught religion, english and typing to high school students, and music to elementary school children in Balboa until October 1971.

In 1986, she and Sr. Theresa Baldini MM were assigned to South Sudan at the request of Sudanese Bishop Paride Taban, to establish the first Contemplative Community in the Diocese of Torit. They lived with two African Sisters who had the desire to be part of a contemplative community. In 1992, because of the escalation of the war, the Bishop advised all expatriates in his diocese to leave temporarily. They were asked by the Contemplative Community to return to Maryknoll, NY, as the war indicated it would be sometime before she could return to South Sudan.

In January 2000, she and Sr. Theresa accepted the Sudanese Bishop’s invitation to return to the Diocese of Torit in South Sudan and began a House of Prayer and Peace in Narus, an area with over 40,000 displaced Sudanese people. Their dwelling welcomed people to join them in prayer, as well as a monthly day of recollection for the diocesan personnel and others who wished to join. In collaboration with the Sisters in the Diocese and the Bishop, they began an Association of Sisters of the Diocese of Torit and met twice a year for spiritual enrichment and bonding. In February 2010, with the consent of the Bishop, Maryknoll turned over its dwelling to the Xaverian Brothers, and the Sisters returned to the Maryknoll Contemplative Community, where Sr. Madeline continued in her prayer ministry.

Maryknoll has been blessed and strengthened by Sr. Madeline’s recognition and attraction to the Love that called her. In all she shared and valued, it is so clear that Love alone was essential for her. Her great desire to explore the realm of solitude and to channel the energies of her encounter with Love to all of us here and beyond was and continues to be such a powerful witness. She revealed to all of us in her most personal way that Love alone is essential to our mission call and to all walks of life.

One of the papers Sr. Madeline kept on her desk was a quote from Martin Luther King that said: “At the center of non-violence stands the principle of Love.” On the other side, she wrote:

“May my prayer not be a “thinking about” anything, but a direct seeking of Your Face, O Invisible God of Love, which cannot be found, I know, unless I become lost in You, who are the Invisible One.  Grace this to be a deep reality, my Beloved ~ to be lost in You in Love and lifting all humanity and a needy world to Your unconditional Gaze of LOVE.”

At her death on Janurary 16, Sister Madeline was 97 years young and a Maryknoll Sister for 78 years.