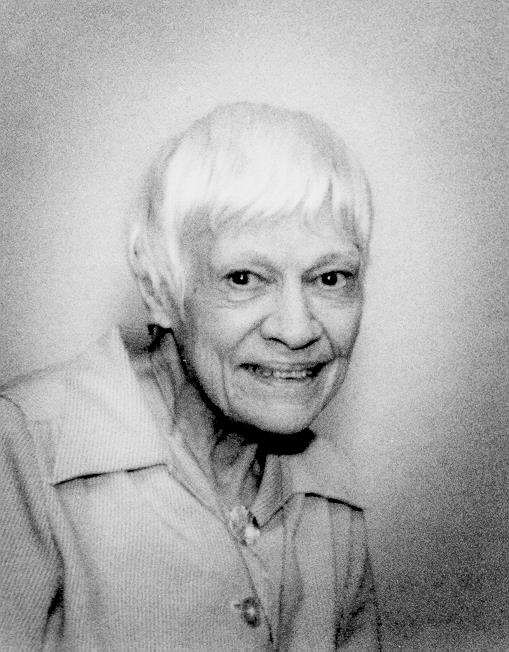 In psalm 90, the psalmist gives us his view of what we can expect of life. Our years quickly come to an end, he says. “The days of our life are seventy years or perhaps eighty, if we are strong.” In any case, they are soon gone. (Ps. 90: 9-10)
What then shall we say of our Sister Margaret Kulage, affectionately known by all as Sister Marge, who died in Maryknoll Home Care IV, Maryknoll, NY, on August 28, 2014 and whose wonderful, long and graced life spanned 107 years, winning her the accolade of being the eldest ever Maryknoll Sister?

Marge Kulage was born on June 24, 1907, in St. Louis, MO to Henry J. and Cunigunda Kuenz Kulage. Hers was a happy childhood in a large family of ten children, five boys and five girls and kind and loving parents, interested in their children’s lives and activities. All have pre-deceased her.

Marge attended Holy Cross Parochial School, St. Louis. The story of St. Francis Xavier, which she heard for the first time, in the 5th grade awakened in her heart a call to a missionary vocation. Fortunately, she met a Maryknoll Father. This meeting sealed her desire to be a missionary as a Maryknoll Sister. However, it would take years before she would realize her dream.

After graduating from Holy Cross School, Marge attended Speedwa Business School in St. Louis for two years (1920-1921).She worked for eight years for the Shell Oil Company. She applied to enter Maryknoll in March 1928, but did not contact Maryknoll again until January 1929. She was 21 years old. She wrote to Mother Mary Joseph, “During this period my desire to become one of your community has not lessened one atom. Lessened? Oh it has increased 100%”. She then explained that her mother had been ill and in the hospital, and her grandmother had died. This had put financial strains on the family. Before coming to Maryknoll, she would have to help relieve the family’s financial burden and earned enough to pay for her dowry and other expenses required of postulants.

Father Anthony Wigger, pastor of Holy Cross Parish, St. Louis had written Mother Mary Joseph a letter of recommendation for Margaret: “With great pleasure,” he wrote, “I recommend to you Miss Margaret Kulage. A splendid young lady, good. Margaret is an open book,… I hope she will retain the joyful courageous spirit I admire so much in her….” Learning that financial problems at home would retard her entrance, he sent a personal check of $100.00 to Mother Mary Joseph to cover her postulant expenses. Margaret entered Maryknoll on April 5, 1929. At reception, she was given her religious name, Sister Mary Irma Francis. She made her First Vows at the Motherhouse on June 24, 1931 and her Final Vows on the same day in 1934. Following Vatican II, Sister returned to her baptismal name, Margaret.

Margaret completed her high school education at the Venard at Clarks Summit, PA in 1936. She also studied music at Pius X School of Liturgical Music in Manhattan. She completed her work for her Bachelor of Education degree from Maryknoll Teachers College in 1958 while serving also as assistant Superior at St. Teresa’s Convent, the residence for the Maryknoll Sisters working in the offices of the Maryknoll Fathers.

She was assigned to Hawaii in 1943 where she was recognized as a “wonderful community person who participates in everything.” She was also a wonderful organizer.

In the Islands, she engaged in catechetics, pastoral work and education. She served on Oahu in Waialua, (1943-1945) and in Kalihi (1945-1953). Recalled to the Motherhouse, she served in a variety of administrative works including being Mistress for Junior Professed Sisters. Returning to Hawaii in 1962, she served as superior and principal at St. Anthony School, Kalihi on Oahu. Later, she taught in Wailuku on the Island of Maui (1965-66).

After two more years again spent in administration at the Motherhouse, (1967-1969), Sister Marge was sent to the Philippines where she taught at Maryknoll College, Manila, (1969-1970) then served as principal of La Salette Elementary School in Santiago, Isabella, (1970-1972).

On several occasions, Sister Marge had asked to join the Maryknoll Cloister Community. Each time she was told that her vocation was to the active life, and living the Dominican ideal of Contemplation in Action. She was a model of this ideal throughout her long life.

Marge’s missionary life took an entirely different turn when Father Jim Noonan, MM asked Sister Blaise, the Maryknoll Sisters Regional Superior, if there was a possibility of getting a Sister to serve as Secretary for the Maryknoll Fathers in the Philippines. She wrote, “The members of our Regional Board asked me if I would be willing to take the job. It seemed like an answer to my prayers,” and so from July 1, 1972, Marge began to work as secretary to the Maryknoll Fathers in the Philippines, a work in which she would be happily engaged until April 1, 1978.

It was also in 1972 that she and 11 other Maryknoll Sisters in the Philippines survived an ordeal at sea after their boat capsized, surviving 16 hours in shark-infested waters off the east coast of Mindanao. She carefully recorded this experience, which had a lasting effect on her life.

It was while she was working for Father Jim that Marge discovered the ministry that would define her active missionary life: prison ministry.

During Father Noonan’s absence, Sister kept in touch with some of his prison friends. Before long she came, she said, “to the discovery that residents in jail are among the poorest of the poor in so many ways, and also that few people are willing to show compassion for them.” Prison is People,” she wrote, “real people—they are not just case numbers. Many in jail do not deserve to be there; and many walking the streets do deserve to be in Jail…” Before long, she found herself visiting jail residents on a regular basis whenever time permitted. Sister was 80 years old at the time. “I did not find my age a handicap in my ministry”, she said. Sometimes, it proved an asset in speaking with officials, attorneys and judges. And indeed, it did as she managed after tenacious effort with officials to free a prisoner serving time for a crime he did not commit!

She lived in Baguio City from May 1, 1979 until November 1, 1982. She continued visiting prisoners in the Benguet Provincial jail in La Trinidad and in the Baguio City Jail. For her prison work Marge in 1981, was awarded the Everlasting Award on the occasion of the Benguet Foundation Day celebration in recognition of her deep concern in the welfare of the provincial prisoners through spiritual and maternal assistance.

In 1984, The Metro Manila Metropolitan Police Force in Quezon City, singled her out for an award which reads: “in fitting recognition for her outstanding contribution to humanity with genuine sense of sincerity and compassion, manifested by her philanthropic deeds and dedication to the cause of the poor, the sick and the needy, a noble virtue of a true Christian heart and God’s special gift to mankind. She continued her prison apostolate in the Quezon City Jail, and later in New Bilibid Prison, the National Penitentiary of the Philippines, in Muntinglupa, Manila. (June 2, 1987- June 25, 1991). In 1997, she received the Award for service, presented by the Episcopal Commission on Prisoners’ Welfare, of the Catholic Bishops Conference of the Philippines.

Marge also engaged in the charismatic movement active in the Philippines. She organized prayer groups with lay people, teachers, doctors and nurses, and Bible Study classes to help them “learn how they can personally apply God’s Word to their everyday lives.”

Time was passing on. The years had only served Marge to be ever more thankful to God for her Maryknoll vocation. On the occasion of her Golden Jubilee in 1979, she wrote to Sister Melinda Roper, then President of the Maryknoll Sisters: “I would like to ask you to join me in thanking God for the many and great blessings which He has showered upon me over the past half century. Privileged indeed have I been to be a Maryknoller.”

At 88, Marge began to realize that she was growing old, but she did not want these last years to be wasted. She wrote, “I feel the time is near when prayer and sharing in the redemptive sufferings of Christ may be my greatest contribution to the mission cause.” She was not quite ready to give up. She added “At the same time, with the help of therapy I envision maybe years of helping part-time where I can.” Someone commented, “Marge is the busiest retired person, I have ever known. During her retirement, Marge had taken the Philippines and Prisons for her Prayer Ministry.

We welcome here today, Father Jim Noonan, our Maryknoll Brother, and one to whom Sister Marge was deeply devoted during her long life, who will preside at our Eucharistic Liturgy of Christian Burial.