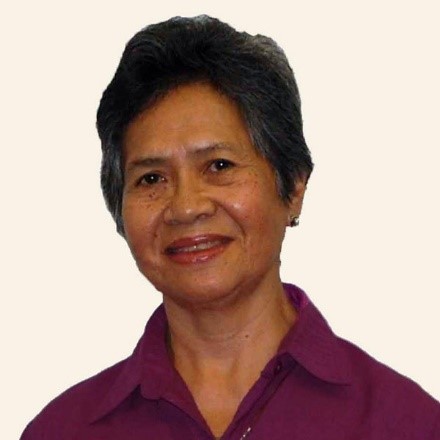 “This is the day that the Lord has made; let us be glad and rejoice”. On April 28, 2020, as these words still resonated in our hearts and minds from the days of Easter, Sister Marie Christelle Zabalerio went home to the God who loved her and shared the journey of her life. She died at the Mary Manning Walsh Care Facility in New York City. She was 81 years old and a Maryknoll Sister for 56 years.

Estela P. Zabalerio was born on January 11, 1939 in Lucena City in the Philippines to Eugeniano and Segundina (Padillo) Zabalerio, one of four children. Estela graduated from Maryknoll Academy, Lucena City, in March 1955. Throughout her high school and college years, she was active as a member of the Sodality of Our Lady and taught religious education to children and adults. She went on to study for a Bachelor in Science in Elementary Education at Maryknoll College in Quezon City which she earned in 1959. As was the custom, both during her novitiate and after her profession, she took additional courses at Maryknoll College and was granted a second Bachelor’s Degree in General Education in 1973.

From 1968 until 1971, Sister Christelle served as the school principal at the College of St. John the Baptist in Jimenez and then as a teacher and pastoral agent in San Miguel Parish, Davao City. In 1973, she came to the Maryknoll Center in New York and worked as a Nurses’ Aide at Bethany, the Maryknoll Sisters’ residence for sick Sisters, until 1978. This work resonated well with her desire to show her love and care for others. She went on to study and earned an Associate Degree in Arts/Nursing at Trocaire College in Buffalo, NY in 1978.

In March that same year, the Central Governing Board was exploring the possibility of a new commitment in Bangladesh. Sister Anna Marian Pavao wrote to Sister Christelle asking if she would be willing to be part of this new adventure along with Sisters Dolores Congdon and Mary Ann Junas. Sister Christelle was enthusiastic and saw herself working in “some sort of combined pastoral, community building and nursing” ministry, whatever was needed for the team and the people there. And that’s how it turned out — she was assigned to Bangladesh in 1979.

As often happens with Maryknoll Sisters, God offers us the chance to accompany the people in ways for which we have not been explicitly prepared but all left in God’s hands. Sister Christelle was quickly involved in the Natural Family Planning movement, in Khulna and in Dhaka at the National Office, doing family counseling, giving pre-marriage courses, and training Christian, Muslim, Hindu, and tribal women for Natural Family Planning. Her gentle presence endeared her to the many women she worked with over the years. She also worked with young Bangladeshi women religious who remember her still with affection. She also organized various ecumenical groups. From July 1991 to July 1992, and again from 1993 to 1994, Sister Christelle spent time in the Philippines on family ministry, caring for her aging parents. She returned to Bangladesh and was involved in ecumenical ministry in Dhaka until 1995.

In 1996, Sister Christelle was discerning a transfer to East Timor when she was requested by the Central Governing Board to join the Orientation Team in Chicago starting August 1, 1997. She began this task after receiving a certificate from the Institute of Spiritual Leadership at Loyola University, Chicago, where she later received her MA in Pastoral Ministry in 2001. At the end of this time, in 2002, she wrote: “For me these years, including the challenges, have been a life-giving experience that will certainly help me as I move with joy and excitement into the next phase of my journey.”

Sister Christelle spent the next two years at the Center, helping out in development, in the sacristy, and as an organist for the fourth floor.  Still feeling the call to overseas mission, she applied to and was assigned to East Timor in 2004. There she entered into various educational and community-based health care ministries. She also started the Natural Family Planning Movement in the diocese — a task she knew well and loved.  Once again, her presence with the women was especially welcomed. She also started some income-generating projects, including with Timor’s famous coffee!

For a long time, Sister Christelle had suffered from pain, and she asked to leave East Timor and return to the Center in New York. In February 2014, she joined the Center Chi Rho Community and in 2016 the Eden Residential Care Community.   She suffered pain throughout all these years until her death. Now, she is free of pain and with God. We are grateful to our faithful staff that cared lovingly for Sister Christelle throughout all these years.