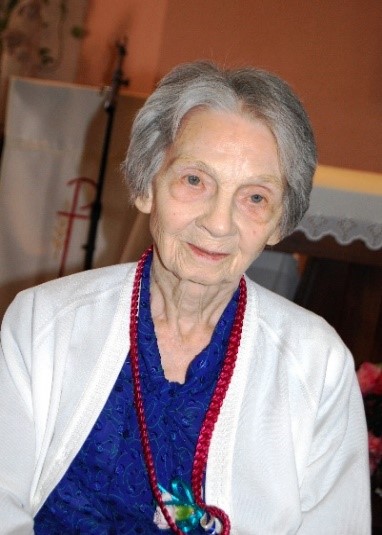 Born July 29, 1917, Sister was the first daughter of Euphemia Dudenhoeffer and Louis Henry Rost.  Her three brothers John, Maryknoll Father Louis Rost MM, and Joseph and two sisters Cay and Bernice have predeceased her. She was baptized Anna Maria at Immaculate Conception Church in Jefferson City, MO on July 31,1917.  She attended and completed the ten years of the parish school, then transferred to St. Peter’s High School and graduated in 1935. Anna Maria attended Mt. St. Scholastica College in Atchinson, KS for two years before entering Maryknoll on July 5, 1937.  It was during this period of her education that she discovered her talent and love for music.

At her reception, Sister received the name Marie Corinne.  Her First Profession of Vows was on January 6, 1940 at the Motherhouse and Final Vows on January 6, 1943 at San Juan Bautista, CA.  She received a Bachelor of Music degree with a minor in piano from Manhattanville College of the Sacred Heart, NYC in 1942.  Her joy and knowledge of music would be part of every mission assignment.  In 1942, Sister Corrine was assigned to San Juan Bautista, CA, a small mission station, as the choir director.  In 1945, she moved to Los Angeles where she worked in a home for children.  During World War II, she also taught release-time religion classes.

In 1946, Sister Corrine was assigned to Hong Kong and taught religion and music and gave piano lessons at Maryknoll Convent School.  Playing Peter and the Wolf, she introduced 10, 11 and 12 year olds to the various instruments of the orchestra. She also created an orchestra notebook with pictures and explanations of every instrument. Some of the former students still have the notebook. Her appreciation of and ability in music was passed on to many students. One of her students upon learning of her death wrote, “I am saddened with the news of Sr. Corinne’s passing and know she is in God’s hands.  She taught me Music Appreciation and voice and to sing God’s Praises!”

We welcome Father Michael Duggan, MM who will preside at Sr. Marie Corinne’s Mass of Resurrection.