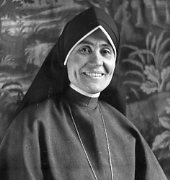 “When I die, all I wish is that the Lord will reach out and say, well done, good and faithful servant.” These words were spoken by our Sister Elenita Barry shortly before she died peacefully on November 30, 2011 in Maryknoll Residential Care.  She was a 104 years old and celebrated 86 years as a Maryknoll Sister this past year.

Elenita Mary Barry was born in Elizabeth, NJ on July 14, 1907 to Rosemary (Wosel) Barry and Joseph A. Barry.   She had six brothers.  Her parents and brothers have all predeceased  her.

Elenita grew up on a farm where she learned to do many things that would serve her well during her missionary life.  After completing her grammar school, Elenita, like many other young women of her era, attended a commercial school, graduating from St. Patrick’s Commercial School in Elizabeth, NJ.

On October 15, 1925 she entered the Maryknoll Sisters Congregation from St. Patrick’s parish in Newark, NJ.  At her Reception she was given the religious name of Sister Mary Elenita.  She made her First Profession of Vows on April 30, 1928 at Maryknoll, NY, and her Final Vows on April 30, 1931 in Los Angeles, CA.

Sister’s first assignment was to Los Angeles in 1930, where she lovingly cared for children in the Japanese orphanage.  This was a prelude to her work with the Japanese later in Korea. In 1934 she was assigned to the Venard, Maryknoll’s Minor Seminary in Clarks Summit, PA.  There, while working at the seminary, Elenita completed her high school education and in 1949, she graduated from Maryknoll Teachers College with a Bachelor of Education degree.

In 1938 she received an assignment to Korea. There she worked with the Japanese.  With the bombing of Pearl Harbor and the United States declaration of war with Japan, Sister Elenita became an enemy national and was imprisoned by the Japanese on December 7, 1941.  She was repatriated to the United States, along with a number of other Maryknoll Sisters, on September 15, 1942, on the Gripsolm, a protected exchange and repatriation ocean liner.

Following her return to the United States Sister Elenita was sent to St. Anthony’s School in the Bronx, NY, where she taught from 1944 until 1951. From 1951 to 1968, Sister Elenita taught in Hawaii in several schools operated by the Maryknoll Sisters.

Sister Elenita’s ability to be comfortable with the young as well as with the elderly, with the healthy as well as those who were ill was not lost on her superiors.  In 1968 when Sister Elenita offered to serve the elderly Sisters should there be a need, her offer was well received by Mother Mary Coleman who wrote: “I was delighted and for many reasons.  I think especially of your ability to meet and relate sincerely with people imparting a happy sense of welcome and your equally obvious gift of putting others at their ease.  Your natural enthusiasm and generous approach to anything needing to be done should make you a decided asset….”

Following an assignment at Bethany, the Congregation’s residence for the elderly-ill Sisters, in 1971 Sister Elenita was missioned to Gallup and Chilchiltah, New Mexico.  There she studied Navajo at the University of New Mexico, did catechetical work and home visiting among the Navajo “as neighbor, friend and social worker,” she said.

In 1983 Sister Elenita was assigned to Stockton, CA where she remained until 2004.  To better serve the immigrant Korean, Cambodian and Hispanic communities of the area, Sister Elenita studied and received a certificate for Teaching English as a Second Language.  In 1987 she received the City of Stockton outstanding volunteer service award for her literacy work with Asian refugees.  Sister Elenita joked about herself saying she was “a free-lance missionary,” whose ministries, besides teaching, included feeding the hungry at St. Mary’s dining room, visiting the homebound elderly and taking communion to them, visiting nursing homes, the hospital, the local women’s prison, and teaching special education at a home for abused children.

In 2003, when Sister Elenita was 96 and still working full-time, someone asked her how she felt about getting old. She answered, “Getting old is in your head. It’s how you accept things.”  At the age of 97 Sister Elenita still felt young in heart when she returned to the Center in New York.  She was not quite ready to retire.  On her regional transfer form she wrote, “I will do whatever I can. I love people – will walk around and smile at people.”  In a recent video of a conversation with her niece, Sister Elenita spoke clearly, “I am happy, very happy and if I die, I hope God will just consider me trying to please him as I can.”  Sister often spoke a Japanese phrase that she translated as, “whatever is, is all right, Lord, your will be done.”

When Sister Elenita died on November 30, 2011, hers had indeed been a long, fruitful, and faithful dedicated life. Well could she expect the Lord to say, “Come blessed of my Father, enter into the joy of the Lord.”

Sister Elenita is survived by a number of nieces and nephews. We are happy to have so many of them present with us here today.

We welcome our brother in Maryknoll, Father Ernest Brunelle who will preside at our Liturgy of Christian Burial.