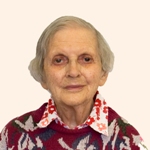 Sister Mary Elizabeth Keyser was born in Philadelphia, PA on May 3, 1920 to Della (Haney) Keyser and Henry Nelson Keyser. She had one brother, Nelson Keyser. Mary Elizabeth graduated from West Philadelphia Catholic Girls High School in 1937. That same year, she entered the Maryknoll Sisters Congregation from St. Matthias Parish in Bala Cynwyd, PA on December 7, 1937. At her Reception, she received the name of Sister Anne Virginia. She made her First Profession on June 30, 1940 and her Final Profession three years later on the same date at Maryknoll, NY.

Sister’s first assignment was to San Juan Bautista, CA, where she began her first of many years in catechesis, a field in which she quickly showed a great interest and talent. Three years later, she returned to NY and served as a chauffeur at Bethany for two years. In 1949, she was assigned to Bolivia where she attended language school then served as principal and teacher in Maryknoll Sisters Schools in Riberalta and Cochabamba for six years.

After serving for two years as a promoter in the Development Department at Maryknoll, NY, she was assigned to Chile in 1958, where she was National Director of Catechesis. As National Director, she was also a member of the ICLA (Instituto de Catequesis Latino American), an international group which offered an opportunity for catechetical instructors to share their resources among the countries of Latin America.

After 12 very busy and productive years, in 1970 Sister chose to begin a new contemplative way of life. She moved into a small house in a forest near the ocean for a time of reflection and prayer and invited both religious and lay people to spend time there. After five years, she moved to the Carmelite Monastery in Santiago and continued her participation in prayer ministry for another three years, serving for a period as director of the Carmelite House of Prayer. At that point, she generously offered to be the contact person at our Regional Center House for two years.

As she realized her health was failing, she asked to go to our retirement house in Monrovia, CA in 1992. Her love for catechesis never waned; she volunteered in Immaculate Conception Parish in catechetical instruction and soon establsihed a program for the local Hispanic community. In 2004, Sister Mary Elizabeth returned to Maryknoll, NY where she remained until her death.

To quote from a letter Mary Elizabeth wrote to Mother Mary Coleman, “This letter comes to you to express my gratitude for what Maryknoll has given me, especially in the opportunity to seek God. Through the years, the fulfillment has been ever richer and God had left nothing undone to bring me to Himself. The joys and sorrows all fit in the picture and I can say no more than I am grateful.”