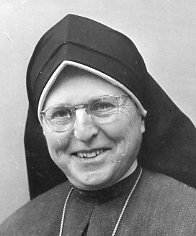 On the evening of October 11, 1992, Sister Mary Jude Babione died about 9:20 p.m., the way she lived, quietly. Sister had serious health problems that became more prevalent in recent weeks. In the end, she just slipped away. Sister Mary Jude was 91 years old and has now entered eternal life unending.

Sister Mary Jude, as she liked to be called, must have felt right at home in our large Maryknoll family. She was born July 5, 1901 in Cleveland, Ohio and lived among 5 brothers and 2 sisters; she was baptized Mary Theresa.

In 1923 Sister Mary Jude was assigned to Los Angeles where she taught in kindergarten and elementary school with Japanese children. While teaching in Los Angeles, she received in 1933 a Bachelor of arts degree with a major in history, from Immaculate Heart College in Hollywood, CA, having previously attended Catholic Teachers’ Summer School for 5 years. In 1933, Mary Jude was assigned to Dairen, Manchuria where she taught at Maryknoll Academy, an International High School, where the student body consisted of 14 or more nationalities, mostly Russian. Because of World War II, Mary Jude was repatriated and assigned to Hawaii in 1941 where she taught until 1967. During those years she also attended our Maryknoll Teachers College in 1954 and participated in Continuing Education courses at New York University in 1960. Sister Mary Jude was in Hawaii for 26 years, most of them spent on the island of Maui and, again, with students of all nationalities. Her primary focus in teaching was business education.

In 1967 Mary Jude returned to the Center to do clerical work in Administration offices until 1971. She then went to Crown Point, New Mexico for adult education in a Navajo Indian school. In 1974, Mary Jude moved into semi-retirement at our Monrovia house where she was active in a variety of outreach programs, Maryknoll Guild activities and senior citizen programs in the area. After 17 years at Monrovia, Sister Mary Jude came to the Maryknoll Nursing Home on April 30, 1991.

Over the span of many years, Mary Jude kept contact with some of her students, even those from the early Los Angeles and Manchuria days. Though small in stature she was active and vibrant. Mary Jude was known to have an outstanding ability to organize quietly and pleasantly and to get along well with people. She was also known to be a person of tact and kindness and led a life of witness as a dedicated woman religious in mission.

We extend our sympathy to Sister Mary Jude’s family and to our Maryknoll members who have known her as friend and Community member for so long. We thank Sister Mary Jude for her life dedicated to and lived in mission clearly in line with Hebrews (3:14): “For if we are faithful to the end, trusting God just as we did when we first became Christians, we will share all that belongs to Christ.” We commend Sister Mary Jude in prayer and joy as we celebrate the Eucharist of The Resurrection.