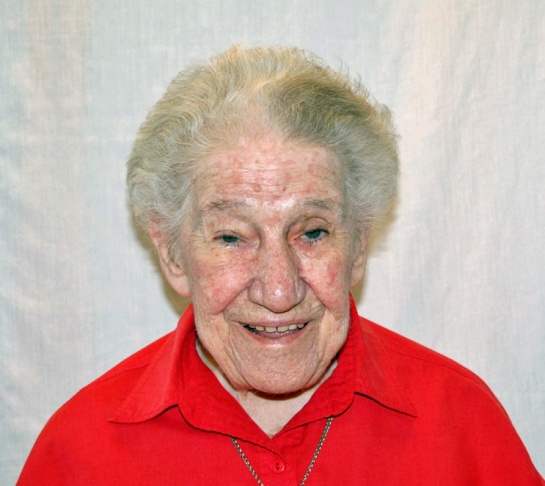 We gather this morning to mourn the death of our Sister Mary Lou Teuful, and also to celebrate her long, fruitful and meaningful life. Mary Lou was a dedicated missioner, a distinguished educator, a model peacemaker and a lover of justice. In short, a true daughter of Mother Mary Joseph.

Born in Cincinnati, Ohio on December 19, 1922 to Mary (Gosink) Teufel and Anthony L. Teufel, Mary Lou, always called Babe by her family, grew up with two brothers, Richard and John and three sisters: Rita, Clare and Catherine, all of whom have predeceased her. She had two other siblings, Angela, who died when she was six, and Anthony who died at birth.

Mary Lou graduated from Our Lady of Angels High School in St. Bernard, Ohio in June 1940.  In the fall, she was admitted on a scholarship to the University of Cincinnati. During the third semester an incident in her mathematics class changed her life.

The professor annoyed by the shenanigans of one of the male students called on him for the solution of the math problem on the blackboard. The young man was completely lost. Mary Lou raised her hand saying, “I know how to do that,” and walked to the board easily solving the problem. The professor was so impressed that he recommended her for the Curtiss-Wright Cadette Program in search of women to replace the male aeronautical engineers being drafted for the war. Mary Lou left the University of Cincinnati and set out for the University of Minnesota where she successfully completed the course of study in Aeronautical Engineering. She was assigned to the Airplane Division of the Curtiss-Wright Corporation as a flight research assistant where she worked until the end of World War II in 1945.

Mary Lou had at the same time been pursuing other studies. She managed to earn a Bachelor of Arts degree from Ohio State University in 1945, and a Bachelor of Science in Education from the same institution in 1946. In the momentary lull that followed the end of the war, Mary Lou, taught high school Mathematics and History in Lykens, OH from 1946 to 1948.  At that time, an invitation from her friend Harriet Talmadge, with whom she had worked at Curtiss-Wright, opened a new door for Mary Lou where she could share a whole array of other talents.

Although the war had ended, the United State military still had thousands of military personnel stationed in Japan and Korea. At the urging of her friend Harriet she applied for the Army Special Services (USO) organized to provide recreational programs for the military and their families. Mary Lou now became the Recreation Director in the Department of Army Special Services (USO) in Japan and Korea from 1948 to 1952. It was there she discovered she was great in leading sing-a-longs and writing new verses to old familiar tunes. In her years of retirement Mary Lou several times a week would go the Morningside, a sort of elderly day care Center in Ossining where she helped lead the elders into old familiar songs.

Mary Lou returned home from her service in the Army and joined her sister Cathy on a weekend retreat. Mary Lou’s life was about to take another turn. The young retreat master asked Mary Lou if she had ever thought of joining the convent. Her answer was clear, “It has never attracted me,” she said. He pursued the topic. “If you ever thought of joining, what order would you join?” Without hesitation she answered, “Maryknoll.” Then wondered, “Where did that come from?” He pursued the topic further making her promise write to Maryknoll. She kept her promise.

Mary Lou entered Maryknoll at the novitiate in Valley Park, MO on February 1, 1954. At her Reception she received the name of Sister Maryam. She made her First Vows on September 8, 1956 at Valley Park. In 1957 she was assigned to Hong Kong where she made her Final Vows on the same date in 1962. Her first assignment in Hong Kong was to Maryknoll Sisters School at Blue Pool Road in Happy Valley.

Mary Lou spent ten years teaching at the school then was sent to the University of Illinois where in 1968 she earned a Master of Education degree in Mathematics. During those ten years she had made her mark as an excellent teacher, well loved by her students. One wrote: “Your dedication, your support and constant positive guidance have made such a positive impact on me and prepared me for a meaningful career as a social worker.” Another wrote, “She has given many girls excellent grounding in math by her teaching, but what came through most in Sister’s work was her respect for her students.

Mary Lou represented the Hong Kong Region at the 1970 General Assembly and was elected as a member of the first Central Governing Board, serving from 1970 to February 2, 1975. During her time on the Board, Mary Lou in her visits to the Regions endeared herself with the Sisters with her ready laughter, her understanding, warm compassionate heart, and her love of joyful sisterly companionship and fun. This won her the name Joyful Teufel. In fun she often introduce herself as, “I am Sister Mary Lou Teufel, that rhymes with Joyful. And indeed she brought joy to many Sisters throughout the world.

Following her term on the Central Governing board Mary Lou was given a very sensitive Special Assignment: to facilitate the transfer of Maryknoll College in the Philippines from the Maryknoll Sisters to a Lay foundation and to change the name of the school. It is now known as Miriam College.

Her mission accomplished, she returned to Hong Kong in 1976 where she worked in the Business Office of Our Lady of Maryknoll Hospital until 1982. In 1983 she was elected Coordinator of the Regional Governing Board in Hong Kong and served in this capacity until 1985. At the same time and until 1999, she was working at Hong Kong’s Justice and Peace Center as Associate Director of the Center for the Progress of Peoples and editor of AsiaLink, the Center’s publication. Mary Lou loved working for Justice and Peace because she harbored in her heart the underlying, unifying conviction that every person can do something to make this a better world. At the same time she continued to serve on the Board of Governors of Our Lady of Maryknoll Hospital and as Maryknoll Advisor to the Alumnae Association of the Maryknoll Sisters Secondary School until 1999 when she left Hong Kong to return to the Maryknoll Center in New York where she became a member of the ChiRho Community. She was later transferred to Maryknoll Home Care.

Throughout her life Mary Lou never lost her spirit of adventure. When she was a little girl she said, “There was something in me that wanted to see the whole world, but I never thought it would be as a nun.” She was humble, very intelligent but without ostentation. And there was a whole other side to Mary Lou. She was a deeply spiritual person.

Mary Lou saw life as mystery. She saw the hand and love of God in everyone and everything. She wrote, “I find my love for God at all levels, in the endless sky, the boundless ocean, the flowing streams, the sunrise and sunset, the wind, restless and gentle, mighty and all powerful, in people all seeking the meaning of life, overcoming the meanness of life, having at last a fair share in the joys and pleasures of creation, knowing their dignity and value in the eyes of God, believing in themselves as loved and cherished by God.” Hers was a mature but simple and deep faith. Sometimes lately when conversation with Mary Lou was not easy, I would hear her say with conviction and clarity, “All I want is what God wants, nothing else. What God wants for me is all I want, nothing more.” She once said, “I had a feeling as if God had a special eye on me.” God cast his eye on Mary Lou one last time and called her home. She died on September 29, 2017 — just short of her 95th birthday on December 19, 2017 — at the Maryknoll Sisters Center in New York. She had been a Maryknoll Sister for 63 years.