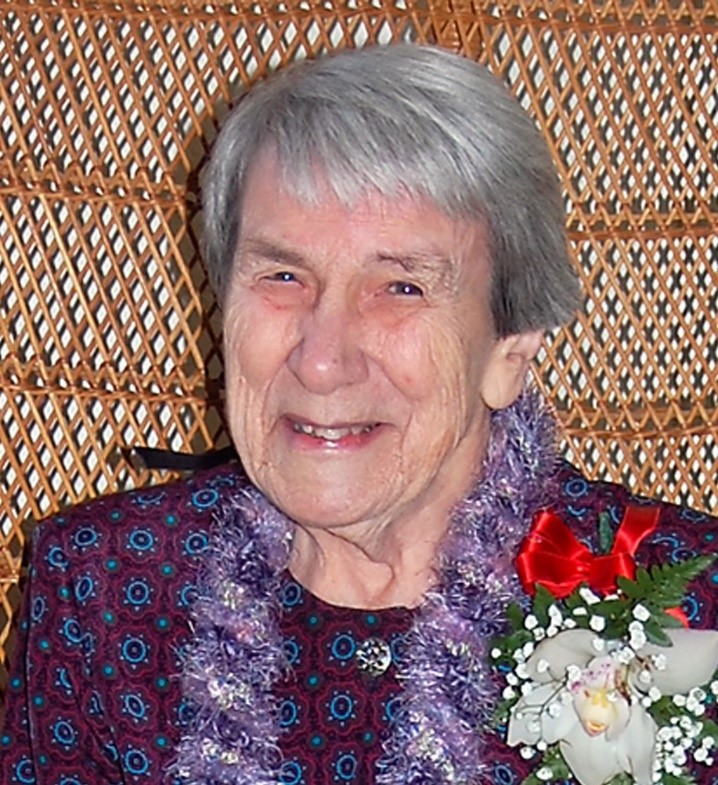 Today, we gather once again to say goodbye to one of our Maryknoll Sisters, one whose service to God, Maryknoll, to the church and to thousands of people in the various places where she served, cannot easily be adequately praised and remembered in one brief letter of appreciation.

Mary Gertrude Naab, the daughter of Grace P. (Donovan) Naab and Joseph M. Naab, was born in Passaic, NJ on November 27, 1921. She had two sisters, Patricia and Peggy. We welcome Michael, John and Krista Feeney members of Mary’s family here with us today.   In 1938, Mary graduated from St. John’s Cathedral High School in Paterson, NJ. She then attended Seton Hill College in Greensburg, PA until 1940.  In 2001 Mary was given the Seton Hill College Distinguished Alumna Leadership Award. It was specified that it was given to her for her generosity and kindness.

Mary Naab says she owed her Maryknoll vocation to her Aunt Margaret with whom every summer, when she was young, she would go for vacation. Aunt Margaret received “The Field Afar” magazine. “On rainy days,” Mary wrote “when we could not go to the park, my sister Peg and I used to read about Maryknoll priests and Sisters who went to China…We decided that when we grew up we would be Maryknoll Sisters”. Her eighth grade teacher encouraged her. Mary wrote, “My eighth grade teacher introduced me to the idea that prayer is a relationship with God that has to be nurtured. …I arrived at Maryknoll along with 23 other young women on a warm summer day in 1940.” It was July 2nd.

Mary made her First Vows at the Motherhouse on March 7, 1943 and she was immediately sent to study at Manhattanville College of the Sacred Heart, NYC. There in 1944, she received a BA Degree with a Major in Sociology and a Minor in Psychology.  She was then assigned to Hawaii shortly before World War II ended. There she made her Final Vows on March 7, 1946.

Mary arrived in Hawaii at a time when the islands were suffering from the ravages of war. There were many homeless people. In addition, the war had caused the breakup of many families. Domestic violence was rampant. Upon arrival Sister Mary joined Sister Janet McConnell at Catholic Charities, later titled Catholic Social Services, originally founded by our Sister Victoria Francis. Sister Mary worked at the agency as a Social Caseworker and from 1950 to 1954 she was the agency’s Executive Secretary and Supervisor. During this time, she continued her studies at the University of Hawaii in the Graduate School of Social Work obtaining her Certificate in Social Casework.

In 1954 she was sent to Stockton, CA to develop the Catholic Social Services in that Diocese. Again she served as Executive Secretary and Supervisor until 1960, when she was asked to take on the position of Survey Director of Catholic Charities in the Archdiocese of San Francisco, CA. Desiring to further her knowledge of various aspects of Social Work, she enrolled at the University of California, Berkeley. There she received a variety of Field Work Placements, among them, working as a Medical Social Worker at Stanford, Palo Alto Hospital, and as a Psychiatric Social Worker at Langley Porter Neuro Psychiatric Institute.

Returning to Honolulu, she again was appointed Executive Secretary and Supervisor at Catholic Social Services a position she held from 1962-1967 while also serving as Chairperson of the Hawaii Chapter of the National Association of Social Workers.

Sister Mary was recalled to the Maryknoll Sisters Center in 1967 where she was appointed Local Superior of the Motherhouse. Completing this mandate, she returned to Honolulu. This time she was invited to join the Diocese of Honolulu Board of Education wherein she served as Planning Coordinator until 1971 when she became the Unit and Planning Administrator at Queen Liliuokalani Children’s Center. These programs, designated especially for children, had nine Units and were active on five of the Hawaiian Islands. During this time, she also was a member of the Sisters’ Regional Governing Board and the Regional Planning Coordinator.

During her long and fruitful life, Sister Mary, served the important Community roles not only as Superior at the Motherhouse but also in Hawaii, as a Regional Board Member in the Central Pacific Region and Team member at the retirement residence at Monrovia, CA.   She served as Associate Director of the Personnel Department at the Maryknoll Center.

We have not in any way exhausted Sister Mary’s achievements in Hawaii, but let us Fast Forward to 1992 when Maryknoll Bishop Quinn Weitzel, Bishop of Samoa, wrote to Mary, “I hope that you will still consider assisting us for a period of time. We have two specific areas in mind for your apostolate.”  One of these involved counseling high school girls and second involved the re-organization/development of a Catholic Office for Social Action.  “We have so far been unsuccessful in getting this work off the ground,” he said Mary worked in Samoa developing the Social Services for the Diocese of Pago Pago from 1991-1997.

In 1996 Bishop Weitzel wrote to Sr. Ernest Chung, the Regional Coordinator: “As you can see we have celebrated the First Anniversary of Catholic Social Services here in our missionary Diocese. This office which is directed by Sister Mary Naab and it has done a remarkable job since its inception. Earlier this the week, I visited the Mother Montessori School, which is directed by Sister Marilyn Evans. Both of these occasions were reminders to me to thank our Maryknoll Sisters Congregation for the special blessings we have because of our two Maryknoll Sisters. Their missionary outlook is an inspiration to me and my people. I don’t often write a letter like this, but it seems most appropriate to let you and the Congregation know how important the presence of our Maryknoll Sisters is, in this part of the Pacific.”

Sister Mary returned to Honolulu where she submitted her resignation from Hawaii’s Catholic Social Services. Mary had been a member of the Central Pacific Region for 33 years. She was 74 years old, but she knew it was time for her to retire. On July 1997, the CLT announced the assignment of Sister Mary Naab from the Central Pacific Region to Monrovia. The letter from the CLT read in part, “Sister Mary’s openness and reflections towards her philosophy of aging have been both inspiring and ennobling examples….”

The Central Pacific Region thanked Mary for her faithfulness to God and for her commitment to Maryknoll. They wrote, “All with miss her spirit of aliveness and laughter.”

The Monrovia Community warmly welcomed Mary. There, for the next ten years she engaged in a variety of volunteer works. She returned to the Center in 2007. On April 1, 2009, she was assigned to Maryknoll Residential Care where she died on May 17, 2019.

Today we welcome Father Ernest Lukaschek, MM who will preside at this Mass of Christian Burial.