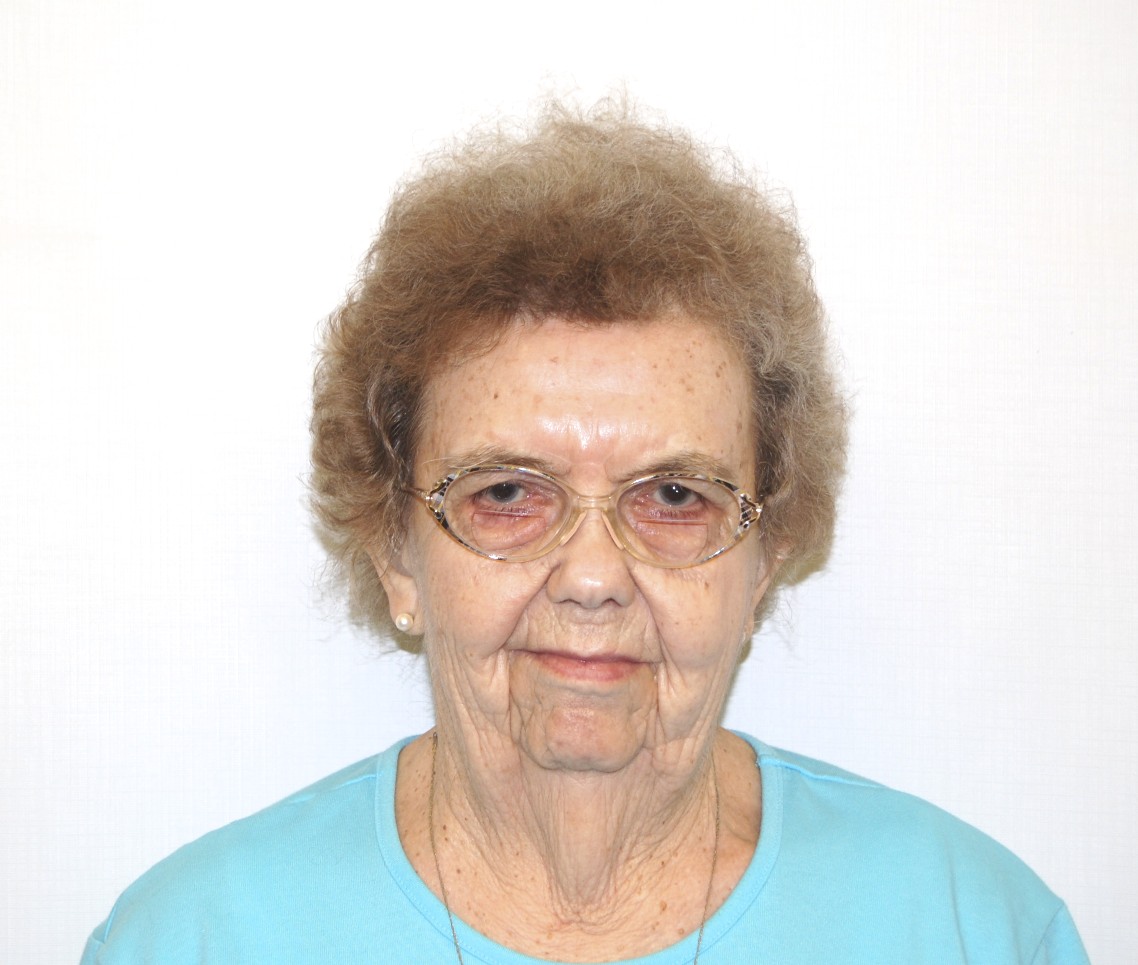 Shortly after entering Maryknoll Sisters on September 2, 1953, our dear Mary Stolz had occasion to remark to one of her Novitiate superiors, “I am very happy here at Maryknoll – and I understand I may never be sent to the missions; but I accept cheerfully any kind of work assigned to me in any place.”  This comment is repeated many times in Mary’s correspondence with leadership over the years, and most especially in the amazing variety of assignments Mary was asked to assume during the span of her long life.

Sister Mary Stolz passed away peacefully at 94 years of age Friday, April 7, 2017, in our Home Care residence.  Mary Teresa Stolz was born in Elyria, Ohio on February 1, 1923 to Mary Dietz and William Stolz.  She had four sisters: Ursula, Cecilia, Anne and Florence, and one brother, Joseph.  Mary’s parents and her siblings are all deceased.  Prior to entering our Congregation, Mary was an active Catholic involved in the lay apostolate of the time, offering her services to the Crippled Children’s Society, the Legion of Mary and the U.S. Air Force Civil Service.  Wanting to do “more” Mary joined the U.S. Navy and served as Wave Yeoman First Class from 1944-1946.  She was proud to be a veteran of World War II.  Upon completion of her service, she took a job as Executive Secretary for Elyria Northern Savings and Loan until 1953.  In that year, as she expressed it, “I began to feel I wasn’t doing enough.  What was attracting me was the need to participate in a ministry serving others and working towards a better world with a team of people who share similar goals and commitment to bridging differences among us—be it culture, religion or life style.”

In April 1953, Mary’s uncle, Father “Uncle Fred” Dietz, MM, arranged for Mary to visit our Valley Park Novitiate, in Missouri, so she could check out the Maryknoll Sisters and be interviewed.  Sister Jeanne Marie Lyons, Novice Mistress, felt that Mary’s age—she was 30 at the time—would hinder her ability to adapt to religious life.  “Uncle Fred” however proved to be a formidable force for Mary and for the Maryknoll Sisters, and with patience and good humor, the rest is Mary’s history.  At Reception, Mary chose the name Sister Mary Philomena.  She made her First Vows September 8, 1956, and her Final Vows the same date in 1962.

Mary was a person with extraordinary business acumen and the Congregation needed her skills.  During a period of 40 years, 1956 through 1996, at various times Mary was called upon to fulfill a variety of administrative positions:  Travel and Shipping, Development work on the West Coast, Director of Supportive Services and Accountant-Controller of the Treasury.  As the Center Administrator from1991-1995 Mary was also a member of the Center Council.   Her diligent and approachable attitude and deep sense of responsibility were characteristics of her service during these years.

From 1958 to 1972, Mary was assigned to the Bolivia-Peru Region where she quickly became the Regional Bookkeeper, Coordinator of the Center House, and secretary to the Maryknoll Society superior there.  To her surprise, she learned to speak and read Spanish well enough to relate easily to the local people.  It was during these years, too, that Mary’s Pastoral and Catechetical interests flourished, and she pursued workshops with great interest to understand the changing Church.

In 1974, the Leadership team urged Mary to pursue a degree in Business Administration.  In 1977 she received a Bachelor of Business Administration degree from Loyola University in Chicago, with a major in Executive Accounting.   Around this time, a new “collaborative mission presence” was opening up in Venezuela with Maryknoll Society members, Lay Missioners and Maryknoll Sisters.  It offered a new vision of Mission and a new form of community.  Sister Mary volunteered to be part of this mission presence.  Considering the contributions she could make as a community member and the organizational skills she possessed, she was assigned with other Maryknoll Sisters to be part of the Venezuela Pastoral Team.  It was not long before Mary was appointed Coordinator of the Region.  It was with great sadness that Father Albertine, MM, would write to her when she was leaving the Team after five years, “You have been such an integral part of what the Region is trying to achieve.  Your work as Coordinator has been invaluable . . . serving as stimulus to greater efforts, a clearer vision and better planning.  Our biggest loss, Mary, is your own person.  You are deeply appreciated and loved by the Regional members whose trust and affection you have gained.  It shows how brothers and sisters can work in Mission more equally, more in union and more effectively.”

In May of 1983 Mary was asked to become the Congregational Treasurer which she declined after serious consideration.   Mary expressed a surprising self-awareness at this time, “I see myself more as a supporter or affirmer.  I Feel I am best serving the Congregation as Accountant/Controller.  One of my greatest drawbacks is my inability to communicate clearly verbally”.   It’s true:  one always knew what she liked and what she didn’t like.  But her sense of humor and that twinkle in her eye when she caught herself being a little too assertive, were clues to know her.

That “inability to communicate clearly” is, perhaps, what often hid the warm, fun-loving, free-spirit that reached out in tenderness to people such as Brother Thaddeus Revers, MM, Mary’s cousin whom she would surreptiously supply with shrimp when he was in the hospital; the volunteer Senior Companion Program in Monrovia through which she helped older people with their taxes and Health Insurance questions, neighbors and shut-ins whose housecleaning she did, corresponding with and encouraging people in prison.  All of this outreach and more is attested to in the many Certificates of Appreciation and Civic Award documents in Mary’s file.

Mary was an extraordinary friend.  She had an unusual skill in making and keeping friends.  Mary’s current Address List holds 59 names.  Within the past three years she has not been able to communicate with family and friends herself, but each of these people has sent her at least one card or gift with their love.  Two special unrelated letters came to her recently, one from a priest, and one from a lay woman.   Both wrote at length thanking Mary for how she had helped them and given them peace of spirit, wishing her well, and promising her their prayers.  Mary smiled when the letters were read to her.

We close this Letter of Appreciation with the beautiful prayer of St. Catherine of Siena as our farewell:

Remembering your faithfulness to God,

In whose vast sea of love your energy for mission was lived out,

We are happy to welcome with us today, Sr. Mary’s cousin, Fr. Charles T. Deidrick, pastor of St. Mary’s Parish, Elyria, Ohio, who will preside at Sr. Mary’s Liturgy of Christian burial.