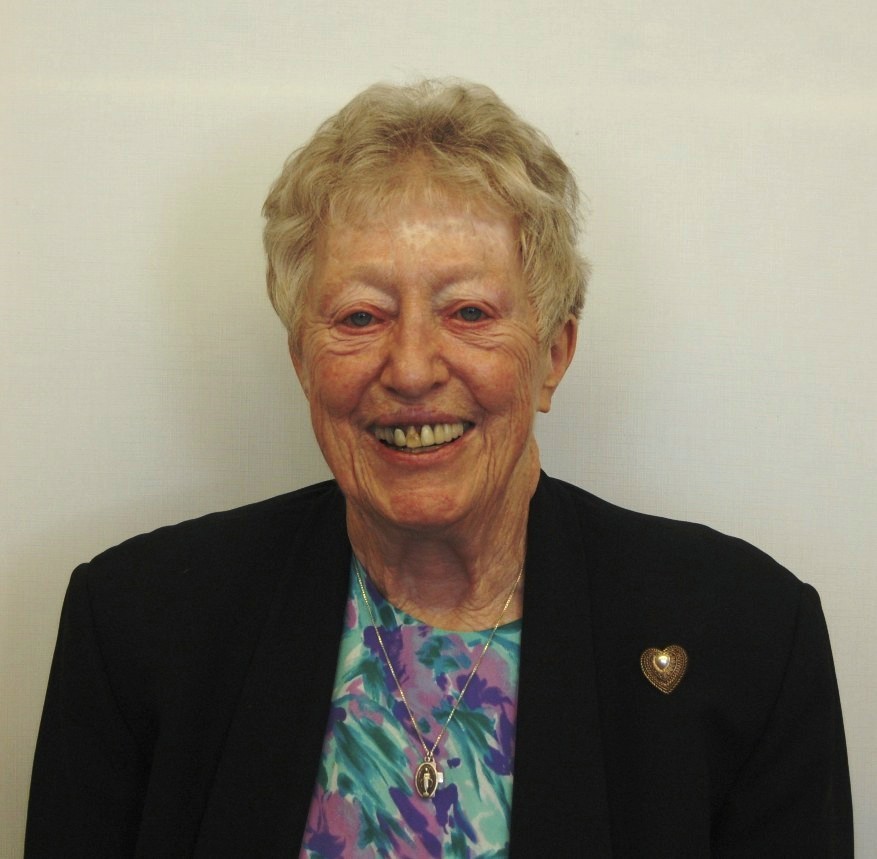 Sister Patricia Hafey died at 9:05 A.M. on May 6, 2020, at the Maryknoll Sisters Center. She was 90 years old and had been a Maryknoll Sister for sixty-eight years. As generously as she had lived, Pat donated her body to science. It is regrettable that this wish cannot be fulfilled during the current pandemic. There is another poignant aspect to Pat’s death: she, who spent herself unremittingly to make life beautiful for others, should die physically unaccompanied by her Sisters who, under normal circumstances, would have surrounded her, praying and singing their loving support in thanksgiving for the sheer goodness of her life.

One thing I have asked of you, for this will I seek: that I may dwell in your holy house all the days of my life, to behold the beauty of your countenance and the holiness of your temple (Ps 27:4).   This verse from Psalm 27 held special meaning for Pat for whom it was a beautiful poetic expression of religious life.

Sister Patricia Hafey was born on July 11, 1929 in Long Beach, Long Island, New York to Francis Hafey and Mary (Gavin) Hafey. She was the third oldest of seven children – three girls and four boys. She was just going to start school when her father moved the family to Springfield, MA where he established his mortuary business. Pat was predeceased by her parents and two brothers. She is survived by two sisters, two brothers.

In 1944, Pat attended Springfield, MA Cathedral High School. She then transferred to Sacred Heart High School also in Springfield, MA graduating in June 1947. She matriculated into St. Elizabeth College in Convent Station, NJ, where, in June 1951 she earned her Bachelor of Science degree in Home Economics, a subject that would serve her well in mission.

Pat was long drawn to religious life, seeing it as “a means of completely dedicating my life to Christ.” She first sought out contemplative communities, but when Maryknoll came up, the appeal was total. Pat entered Maryknoll on September 6, 1951 at Maryknoll, New York. At Reception on March 7, 1952, she received the name Sister Marie Assunta but returned to the use of her baptismal name after Vatican Council II. Pat made her First Profession of Vows on March 7, 1954 at Maryknoll, New York. Her first assignment for the first year was to teach at St. Anthony School in the Bronx, NYC then at Transfiguration in Chinatown. For the following school year she was assigned to Maryknoll High School in Honolulu and, in 1956, to St. Anthony Girls’ School in Maui where she remained for seven years and where she set up a Modern Home Economics Course.  Pat made her Perpetual Profession on March 7, 1960 in Honolulu.

In 1963, Pat was thrilled to receive an assignment to Tanzania. “I can hardly believe it,” she wrote to Mother Mary Colman, “and I am amazed at what God does with the least of us.”  All along, Pat had yearned for pastoral ministry, but as at St. Anthony’s in Maui, she was called upon to set up the Domestic Science Department at Rosary College in Nyegezi, on Lake Victoria where, to the delight of her students who enjoyed her classes and learned many useful life lessons from her. She taught there for seven years. Much later, when she celebrated her Golden Jubilee in 2001, she credited our Congregational motto, Ecce Ancilla Domini, for the “peace and joy,” she said, “with which I responded to these assignments, both to those I preferred and those I did not prefer. However, I learned that every assignment prepared me for the next one.”

Pat always wanted to work directly with village people. The opportunity came in the early 1970s when she was free to offer her services to President Nyerere’s nationwide program of self-reliance. From 1973-1977, she lived in a Maryknoll community in an Ujamaa Village in Rulenge Diocese in western Tanzania assisting in the development of Small Christian Communities. Her background in home economics had prepared her to thrive in a situation that demanded ingenuity at every turn. “These years,” she reflected later, “were a golden high light in my life and I was able to bring the joy of that ministry to my Promotion years on the West Coast.”

In 1978, while Pat was on renewal in California, the Hafey family experienced a terrible tragedy: a fire swept through her brother William’s home during the night of New Year’s Eve, 1978, and took the lives of five members of the family – her brother, sister-in-law, two of their sons and an aunt. Two other children jumped out the second floor window, while two others were away at the time.  Pat joined the 1,000 mourners at the funeral.

From 1981-1984 Pat was in Tarime, Tanzania, where she worked directly with religious education teachers.  She loved it and probably it is what spurred her yearning for a more contemplative life. She wanted so much to start a house of prayer, but in May 1984, she was in a dreadful road accident, not only cutting short her current ministry, but also ended the idea of a house of prayer. She needed months of recuperation from this traumatic accident in which two people were killed. Pat had been a passenger in the front seat of a pickup truck in which the pastor of the parish was transporting a number of people. Not before August was it deemed safe for her to travel to the United States to continue her recuperation process which was to last almost two years.

In 1989, she assisted in the care of her elderly parents and in September 1991, Pat returned to the Center and became assistant to the Director of the Maryknoll Nursing Home until 1994. At this point, her own health situation required a reduced schedule but Pat always gracious and hospitable continued to reach out to the Sisters around her, doing all in her power to make their lives beautiful.

In 1997, the Health Director suggested that Pat might do better in a warmer climate, hence her move to Monrovia, CA where she enjoyed fourteen good years, volunteering in local ministries when she could, living as gracefully as she always had, contributing wholeheartedly to the life of the community.

Pat returned to the Center in 2012 when a higher level of care became necessary.  Invariably, throughout her Maryknoll life, Sisters referred to Pat as refined, gracious, affable, generous, gentle, hospitable —someone who was “all Maryknoll.” Wherever she was, she contributed wholeheartedly to the life of the community and she was greatly appreciated for it.