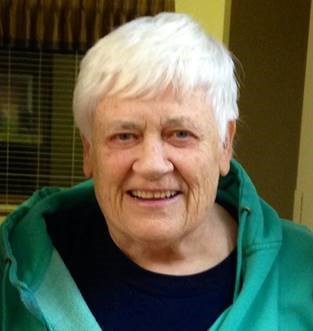 Our beloved Sister Rita Keegan died at 5:55 A.M. on June 2, 2022. Two and a half years ago, Rita wrote a Letter of Gratitude to express how much everyone who had been a part of her life meant to her.

“Dear Sisters of my Maryknoll community and Sisters of many other communities, my parents, sisters and brother, nieces and nephews, and grand ones too, friends of my 12-Step community, friends and colleagues in community and mission, and my very dear friend, Sandi Abegg who lived in intentional community with me for 20 years. I remember all of you with gratitude and wish that each of you may know the greatness of every person in our oneness as an Earth Community.” (Text edited for context.) Rita lived and loved life abundantly. Wanting to continue to serve the whole Earth community even after her death, she generously donated her body to science. Because of the nature of her illness, her wishes could not be fulfilled, but she was cremated as she also had wished.

Rita was born on September 11, 1934, the second of five children, to Raymond Keegan and Eulalia Flannery in Richland Center, Wisconsin. She had three sisters, Sally Sommers, Maureen Coffey, and Patricia Schimke and one brother, Roy Keegan.

After graduating from Richland Center High School in 1952, Rita went to Rosary College in River Forest, Illinois, majoring in English and Speech Therapy. Upon receiving her Bachelor of Arts degree in 1956, she taught one year in a Chicago elementary school before entering Maryknoll on September 2, 1957. Where and how did she hear about Maryknoll?  From the April 11, 1955, issue of Time magazine that featured Mother Mary Columba on the cover.

At her Reception into the Congregation, Rita received the religious name Sister Raymund Maureen, but returned to her baptismal name, Rita Marie in 1974. She professed her first vows on June 24, 1960 at Maryknoll, New York, and her Final Vows on June 24, 1966, in Cochabamba, Bolivia.

Rita’s first assignment in 1960 was to St. Anthony School in Bronx, New York, where for five years, she taught and also became involved in grass roots community organizing. She learned Spanish during this time and traveled to Puerto Rico. In 1965, she was assigned to Bolivia where, for the next fourteen years, Rita initially taught elementary school in Cochabamba, served as school Principal in Montero, and became a Community Developer in Santa Cruz, where she assisted in the resettlement of over 300 families dispossessed of their land from major flooding. Rita wrote funding proposals, negotiated with government and church agencies for land and food, coordinated all kinds of religious and educational programs and actively promoted community decision making.

From 1974 to 1978 she assumed the role of Christian Community Promoter when she and Sister Carol Pereyra became actual members of the resettled community.  In 1978, both Sisters returned to the U.S. for further education. Rita studied Theology at Catholic Theological Union in Chicago, and Community Organizing and Development at various institutions in the United States. In 1980, she returned to Bolivia and focused on the formation of Christian Communities in Charamoco, as a member of the rural Pastoral Team.

Shortly afterwards, Rita was joined in community and on the team by Associate Sisters, Gilchrist Conway, a Sister of Providence, and Gerry McGinn, a Sparkill Dominican. A Sinsinawa Dominican Sister, Mary Mahoney, and two Dominican priests from Chicago were also on the team which focused on Christian formation with Quechua Indians who had had no formal instruction in the faith.

This ministry was abruptly terminated in a 1984 flash flood, when Rita suffered the loss of all three of the Sisters on her team: Gilchrist, Gerri, Mary, and the young lad, Juanito Vargas whom they had taken in. There were two survivors, Sister Margaret Funk, a visiting Benedictine Sister, and the Dominican Father Jack Risley. The untimely deaths of these dear friends left an unspeakable ache in Rita’s heart. After this tragedy, she returned to Maryknoll for time to grieve, to heal, and regain her joyful spirit.

In 1985, with Rita Forbes, she served in the Congregational Personnel Department until 1988. In this position, Sisters found her pre-eminently approachable and will long remember her gentleness and her well-honed expertise in group management.

Rita’s next step was to work for a Master’s degree in Social Work at San Jose, CA.  In 1990, degree in hand, she joined the Western U.S. Region and worked three years with the Palo Alto Veterans Association in California as a drug and alcohol counselor. This was followed by ten years as clinical supervisor in a residential treatment center for addictions in Ontario, Oregon. During this time, Rita was on her own journey in recovery from alcoholism and this became a significant aspect of her life. In a 2007 letter to the leadership, she wrote, “I respect the Sisters who choose anonymity regarding their AA process, but for me the Twelve Step program has been and continues to be such a big part of my spiritual journey that I would want that known at the time of my death.”

Rita was a lifetime learner and teacher. She saw the beauty of grace at work in her own weaknesses and sought to evoke in us the transparency she modeled for our mutual encouragement.

In May 2002, Rita received what she called, “a surprising and delightful invitation,” from Nancy Sylvester, IHM, Founder and Director of the Center for Contemplation. She was being invited to participate in a two-year project entitled, “Engaging Impasse: Circles of Contemplation and Dialogue.”  Over the next months, she would meet with 13 other women religious for three long weekends. In their first encounter, she noted that all except herself were major superiors of religious communities. Typically and with characteristic humility, Rita introduced herself as, “your much-needed grass-roots member.”  She dutifully shared her experience with her Region. “It brought me to the realization that it is in silence and in spaciousness that we ponder the Mystery. Silence is the only way we can truly listen; spaciousness keeps our hearts open to all sorts of unsuspected and abundant answers that we could never imagine, to new visions never dreamt of.”

By the time Rita joined us here at the Center in the midst of the pandemic in 2020, with a failing heart and having had a stroke, we had come to know her as a woman who fearlessly pushed boundaries. In her Living Will, Rita said, “I believe that we should live in such a way that others might have life and have it more abundantly. And to die in a way that bears witness that we believe our Savior lives.”  Rita hoped that, for us, her death would be a “party of memories.”

As death approached, the Sisters, relatives, and friends who prayed over Rita, blessed her evolving consciousness as she was so soon to slip into the fullness of God’s light and love. She had often said: “There is something on the horizon, the likes of which we have never seen before.”   Rita died with her nephew Paul Sommers and his daughter Elise at her bedside, along with friends, Sandi Abegg, Jodi Stark, and Tammy Vogt.  Sister Peg Dillon and other Maryknoll Sisters gathered immediately. We welcome our Maryknoll brother, Father Michael Briggs who will preside at this Mass of Christian burial.