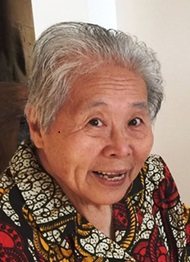 On September 25, 2016 Sister Rosanne’s Tanzanian Resident’s Permit expired. She did not have to renew it since she received a special invitation to take up residence with God for all eternity.

Kim Siong Ong and Uy Bun Ti, both from mainland China, gave birth to Maxima Corazon Ong in the Philippines on May 16, 1940. Rosanne wanted particularly to remember her surrogate grandmother, Rosario Vda de Ong. She credits her grandmother Rosario for being the single most important primary care giver in her life. “Rosario”, she said, “was mother, father, teacher, and mentor for 36 years of life from the first days of my birth.”

It was at the University of the East that Rosanne met the second most important person in her life – Mrs. Eileen Jiz de Ortega, her Professor of English. Eileen enfolded Rosanne into her family and Rosanne related to her as an aunt fondly calling her Tita Eileen whose three sons, Jamie, Albert and David were like Rosanne’s younger brothers.

Maxima Corazon Ong entered Maryknoll June 1, 1963 in the Philippines and received the name Sister Rosanne Marie which she retained throughout her life. Rosanne made her First Vows in the Philippines on March 3, 1966 and her Final Vows on the same date in 1970. She celebrated her Golden Jubilee in 2013.

Soon after Profession, the Philippine Region assigned Rosanne to Maryknoll College, Quezon City where she served as the secretary to Sr. Rose Anthony for two years. For another two years Rosanne served as the Principal of a school in Jimenez, P.I., before her assignment to the Tanzania Region in 1972. Rosanne served as a teacher for seven years in the Business Studies Department of Nyegezi Social Training Center in Mwanza before giving Congregational Services at Maryknoll, New York. While at the Maryknoll Sisters Center she served in various departments in which she provided essential services to enable our Sisters to work in Mission. When Rosanne came back to Tanzania in 1998, she joined the community at Murigha Girls School and taught mathematics and bookkeeping. In 2001 Rosanne moved to Dar es Salaam and joined an NGO called GOIG (Growing Old is to Grow). There she served as Assistant Manager and did the accounts and procuration while also taking on the task of matron for the boarding students who were following courses in batik, weaving and candle making.

For the past ten years Rosanne served in the Diocese of Dar es Salaam. Bishop Eusebius Alfred Nzigilwa her “employer” wrote the following to Rosanne:

“I would like to take this moment to remember all you have done for the Diocese where you have faithfully served as Bursar and Procurator for two Diocesan Schools, St. Joseph’s Millennium Primary and Secondary Schools were taken under your wings since 2005. When the Secondary School opened in 2006, you not only served as the Bursar for the Primary School but you pioneered the way for Accounts and Procuration even at the Secondary School. You trained and put in place your successor in the Primary School and moved on to the Secondary School in 2011. For nearly five years you had the courage to make the commute back and forth in order to keep the finances of both schools on track. For the past six years you have served full-time at St. Joseph’s Millennium School serving as Bursar and Procurator for this growing Diocesan School enduring the long daily commute to assist our Sisters and the students at the Secondary School. As we all know, finance is central to the running of any institution and it is often a thankless job as it is done behind the scenes.

“Though I am somehow recently new to my job I am aware of all that you have been doing to enable Sr. Caroline and her Sisters and staff to provide quality education for our children”.

Sr. Caroline Kokutekana is the Headmistress of the Secondary School in which Rosanne served as Bursar and Procurator. She and her Community had been Rosanne’s Community for these years as they worked together to provide for the Primary and Secondary students in St. Joseph’s Millennium Schools. This entailed the renovation of the Forodhani Campus and the construction at Goba.

A few days ago Sr. Caroline shared that it was such a privilege for her and her Community to have had Rosanne these many years. She worked hard. She was generous to a fault. She was working on school documentation up until her last days; she so wanted to complete her responsibilities and lift the burden of work from Sr. Caroline and her staff.

On September 28, 2016 Rosanne was celebrated for the total gift of herself in thanksgiving during a Mass presided over by Bishop Nzigilwa at St. Peter’s Church, Oyster Bay, Dar es Salaam, Tanzania.

The Mass of the Resurrection was concelebrated together with ten priests of the Diocese. The Maryknoll Sisters in Tanzania, many Congregations of Sisters, and many students from the Primary and Secondary Schools which Rosanne had served filled the pews. The Choir from the church of St. Peter’s sang gloriously for Rosanne. Finally nearly a hundred students filed into the Sanctuary and sang their own song filled with praise for all Rosanne had done for them.

Following the Mass Sr. Rosanne’s body was taken to the Hindu Crematorium to fulfill her final wish to be cremated in a private ceremony with all the Maryknoll Sisters from the Tanzanian Region in attendance.