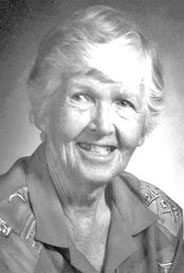 Today, we are here to celebrate the life and death of our dear Sister Vivian Votruba who died peacefully on March 22, 2018 in our Maryknoll Sisters Home Care facility at Maryknoll, NY.

Vivian was born on January 3, 1920 in Minneapolis, MN, the daughter of August A. Votruba and Irma Cosgrove Votruba and she had two brothers, John and Wilbur. They have all predeceased her.

During the years, 1942-1943 Sister Vivian studied at Mount Saint Vincent College in NYC obtaining her Bachelor of Science degree. From 1943 to 1944 she attended classes at Maryknoll Teachers College, NY before going to Marquette School of Medicine in Milwaukee, WI in 1944 where she obtained her degree of Doctor of Medicine in 1947. Her internship was done at Misericordia Hospital in Pennsylvania in 1947 to 1948.

Sister Vivian’s first overseas assignment was to Bolivia in 1948 where she did her language study at Cala Cala and that same year she began her medical ministry in Maryknoll Hospital in Riberalta, Beni, Bolivia. Her medical work took her to other areas of the world: Azángaro, Peru, where she served in the parish clinic and as a volunteer doctor in the local medical post. In 1969 she was inspired to go to Biafra, Nigeria, as a volunteer and part of a Medical Committee working with refugees. Returning to Peru one year later, she shared her medical skills in both Ica and Ciudad de Dios in Lima. In 1982 Sister Vivian returned to Maryknoll, NY to give service in the Congregation’s Development Department in its World Awareness Program. Completing her three years on Promotion, she went to New Mexico to serve among the Navajo Indian people before returning to Tacna, Peru in 1985.

Sister was assigned to Rosedale, MS to do pastoral work from 1991 to 1994. In 1995, Sister Vivian was one of the first three sisters who responded to a request from the US Catholic Bishops Conference to be in mission in Pogradec, Albania. There she served from 1995 to 1996 in pastoral and parish administration and women’s issues. Upon her return to the United States, Sister joined the Maryknoll Sisters at their retirement house in Monrovia, CA. There she engaged in a variety of volunteer services in both the Sisters’ and Civic Community.

Vivian returned to the Maryknoll Sisters Center in New York in 2002. There she was active in the Chi Rho Community serving as Assistant Sacristan and doing clerical work in the Out Patient Care Unit (OPC) until 2005.

After serving in several different parts of the world, I would like to include some of Vivian’s own words written in 1990. Commenting on the poverty she saw in those places where she served, she wrote: “Here the Kingdom of God is visible in the poor and their response to the problems they face. I’m glad to be here where God is present and revealing Himself.”

I close with a poem she wrote for the library exhibit of poetry in 2004 entitled:

The Mysteries of Light

See his beauty glorified
Best of all
Taste the sweetness
of the Lord.

I hear the vibrant voice of Jesus.
See his beauty glorified
Best of all
Taste the sweetness
of the Lord!

We welcome our Maryknoll brother, Fr. Joseph W. Kowalczyki who will preside at the liturgy of Christian burial.