All Creatures Great and Small

Inspiration for a blog post can come in the most unlikely of places – like when you are making photocopies for a researcher! Last month I was making photocopies from one of the Maryknoll Father’s Bolivia diaries and the word “dog” caught my eye. Why would the Fathers be writing about a dog in their diary? I had to read to find out more and what I found made me smile:

“But in what other walk of life, except for the very rich can a man have a boat, a horse…and a dog, and be justified in spending money on them because they are the necessary tools of his trade?…Speaking of dogs, I am convinced every missioner should have one. The breed of dachshund is a good one. They are small and don’t eat much and valiant way beyond their size. One comes home after a long, hard, cold wet Saturday and Sunday, dead tired, the whole barraca is sleeping or eating and no one cares how much the poor padre has suffered. But when you get within ten yards of the house and let out that whistle and a bundle of brown fur comes boiling out, turning cart wheels, and whimpering with sheer joy…It restores your battered ego. The rest of the world might think Padre Ricardo is an old pot, but not Bridey Murphy. If I was half as good as the adoration in those limpid brown eyes I wouldn’t have to worry and fret about my salvation. I’d be in.” [From the Maryknoll Fathers and Brothers’ Conquista Diary, August 1956.] 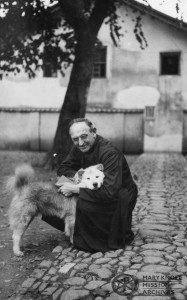 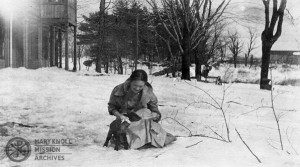 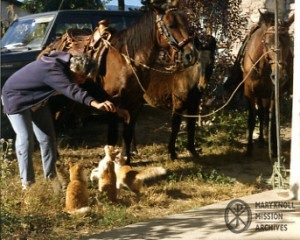 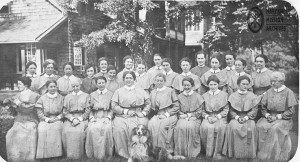 A group of Maryknoll Sisters with Mother Mary Joseph. Their pet dog gets to sit for the photo too! 1918 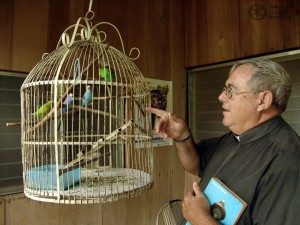