During the 1950s and 1960s groups across the country were forming with one goal in mind – raising funds for the Maryknoll Sisters.  From Chicago to St. Louis to the suburbs of New York City, groups, mostly composed of women, began hosting card parties and fashion shows to raise money to send to the Maryknoll Sisters.

One such group was the Long Island Maryknoll Committee.  This group held a luncheon, card party and fashion show in 1951 and 1953.  The first event “was planned after a visit to Maryknoll when permission was granted by Mother Mary Joseph for the purpose of raising Funds to help in the advancement of the work of the Maryknoll Order.”  The Hotel Commodore in New York City was the chosen venue.  A lunch of of Chicken Saute Chasseur and Pave Fraiselia was served.  While dining the guests were treated to a fashion show with the clothes provided by Milgrim.  Afterwards door and table prizes were handed out, including an electric blanket, luggage, an area rug, lamps, and a pressure cooker! 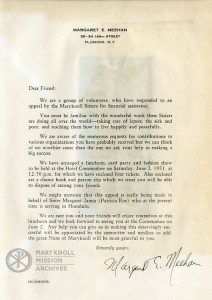 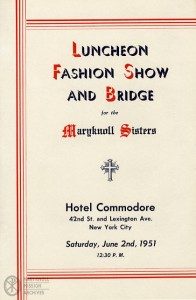 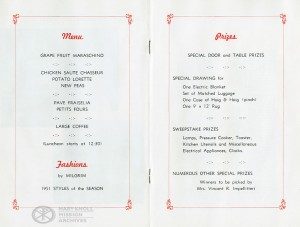 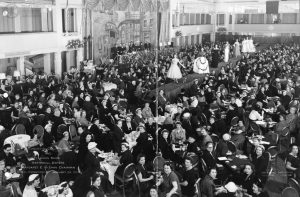 In 1959, the Maryknoll Sisters Guild of New Jersey began raising funds to help educate Sisters in the fields of medicine, technology, and education.  The primary means of raising funds were card parties and raffles.  In later years, funds raised by the Guild were used for many purposes, such as to aid victims of the 1976 earthquake in Guatemala.  In 1962, the Guild hosted a fundraising party at Mayfair in West Orange, New Jersey.  The evening consisted of games of Bridge and a hat show.  There was a drawing for four grand prizes that included a four-piece sterling silver tea set (valued at $575), a diamond ring, an imported luncheon set, and a Lily Dache hat.  Sweepstakes prizes included a mink collar, a lady’s umbrella, a six-deck bridge set, and an automatic clock radio, among others. 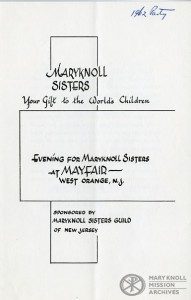 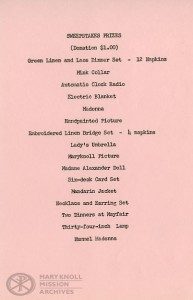 NIKA: Chicago was the dream of Sister Aquinas McKenna.  Sister was a promoter for the Mid-West region and in September 1963 she met with a group of lay women friends of the Maryknoll Sisters.  The first official meeting was held on December 5, 1963 at the Maryknoll Sisters Greenwood Avenue house in Chicago. Sister Aquinas suggested the name NIKA as it was derived from a Greek word meaning “Christ conquers all.”  Beginning in 1964, NIKA held an annual “Round the World” Ball which was successful in raising funds for the work of the Sisters.  That first Ball was MC’d by Michael Kirby and featured Mary Pastor and was held at the Lake Shore Club in Chicago, Illinois on October 24, 1964.  Guests listened to the music of the Hi-Fi’s as they feasted on Tournedo of Beef Tenderloin, oven browned potatoes, string beans, and a chocolate sundae. 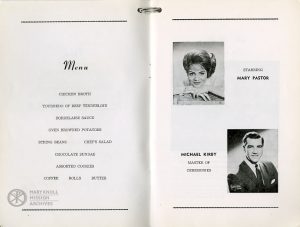 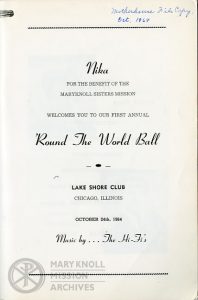 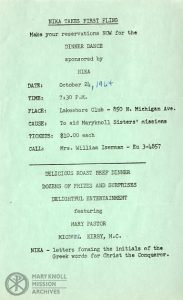 On Long Island, Mr. James A. Roe, father of Sister Margaret James (Patricia) Roe, held a Reception and Luncheon at the North Hills Golf Club in Douglaston, Long Island, NY on December 8, 1959 in order to raise funds for Maryknoll.  Prizes included two tickets to see Mary Martin in The Sound of Music on Broadway, a beaded evening bag, a steam iron, a silver lazy susan, and a red velvet hostess coat.  All you needed was a dollar and you would be entered to win a fabulous prize! 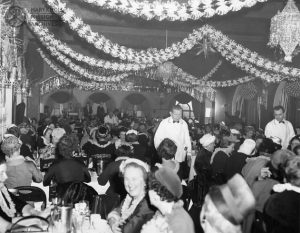 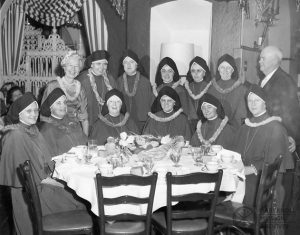