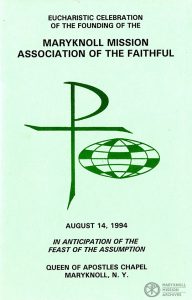 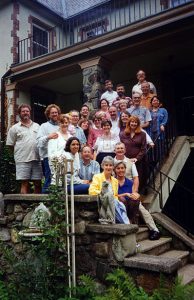 Over the course of two weeks, lay missioner delegates met to discuss the foundations of a new association.  First up was choosing a new name.  Some contenders were Mission Associates of Maryknoll and Maryknoll Associate Missioners, but in the end, the chosen name was Maryknoll Mission Association of the Faithful.

Next it was time to work on their vision statement.  It says in part, “We respond by crossing boundaries of culture, nationality and faith to join our lives to those of the poor, marginated and oppressed peoples of the earth.  We strive with them for justice, peace and fullness of life…”

Another outcome of the Founding Assembly was the creation of the Association’s Eight Core Values, which remain to this day.  They include: Gospel Values, Option for the Poor, Conversion, Witness, Cross-Cultural, Community, Ecclesial Teams, Building Bridges with the US Church. 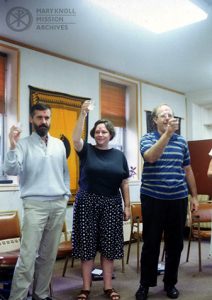 One of the final items discussed was the election of members to the leadership team, known then as the Center Coordinating Team.  After the ballots were counted the newly formed team included Vicki Armour-Hileman, Tom Rowan, and Sam Stanton.

The two weeks ended on August 14, 1994 with a Eucharistic Celebration at the Queen of Apostles Chapel on the Society’s campus.  The afternoon event included songs, blessings, a reading from Luke’s Gospel 1:39-56, a homily given by Sr. Claudette LaVerdiere, a Thankgsiving Reflection, and a closing prayer by Fr. Ken Thesing. 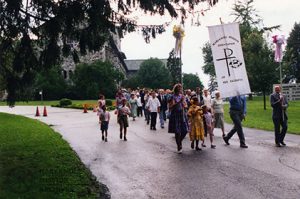 After the Eucharistic Celebration, it was off to Bethany, the then-headquarters for the Lay Missioners, for an evening reception.

Over the last twenty-five years hundreds of Maryknoll Lay Missioners have given themselves to work all over the world in at least 17 countries plus the United States.  Lay missioners have been involved in prison ministries, teaching art to disabled children, ministering to the elderly, starting urban garden projects, working with AIDS patients, feeding the hungry, and even coaching soccer teams!

The Archives’ staff would like to extend a congratulations to the Maryknoll Mission Association of the Faithful on its 25th Anniversary. 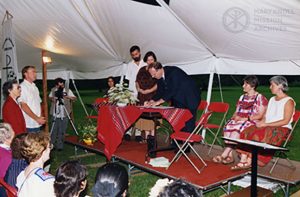