Today when an organization wants to get its message across to a large group of people they can make a social media post, or send out an email blast, or create a digital newsletter.  But what about before the internet existed?  The only way to spread your message was through the mail.  From its beginning, the Maryknoll Fathers and Brothers knew they needed to make itself known to the American people.  Bp. James A. Walsh, co-founder of Maryknoll, was known to say, “Any idea to be successful must have a literature.”

The most well-known asset Maryknoll had at its disposal was its magazine, The Field Afar, later re-named Maryknoll.  The magazine pre-dates (1907) the founding of Maryknoll (1911) and is still issued to this day. However, Maryknoll knew they needed more than one way to reach its audience – hence the creation of its mission education publications.  Over the course of the last 100 years, Maryknoll has created numerous serial publications that were geared toward US Catholics, students, clergy, and other interested parties.  Below are a sample of some of these publications, which can be found in the Archives’ Educational Resources collection.  Please click on each image to see it in a bigger window. 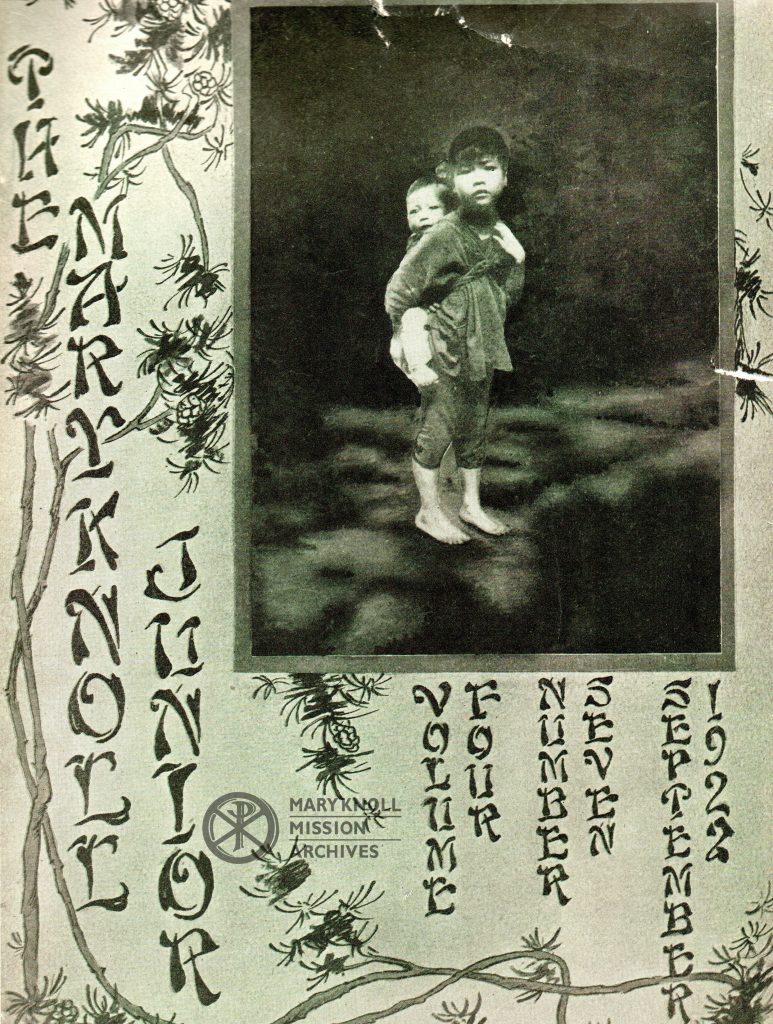 First up is Maryknoll Junior, whose first issue was released in 1919.  Maryknoll Junior was geared towards children and provided information on Maryknoll’s work domestically and overseas.  The first 8 volumes ran from 1919 to 1926.  Beginning in 1935 Maryknoll Junior was re-instated and the numbering system started anew with Volume 1.  To the right is an article from Volume 4, Number 7 – September 1922, which focused on what missioners should be bringing with them to China.  Examples include a writing machine, carpenter tools, and a camera. 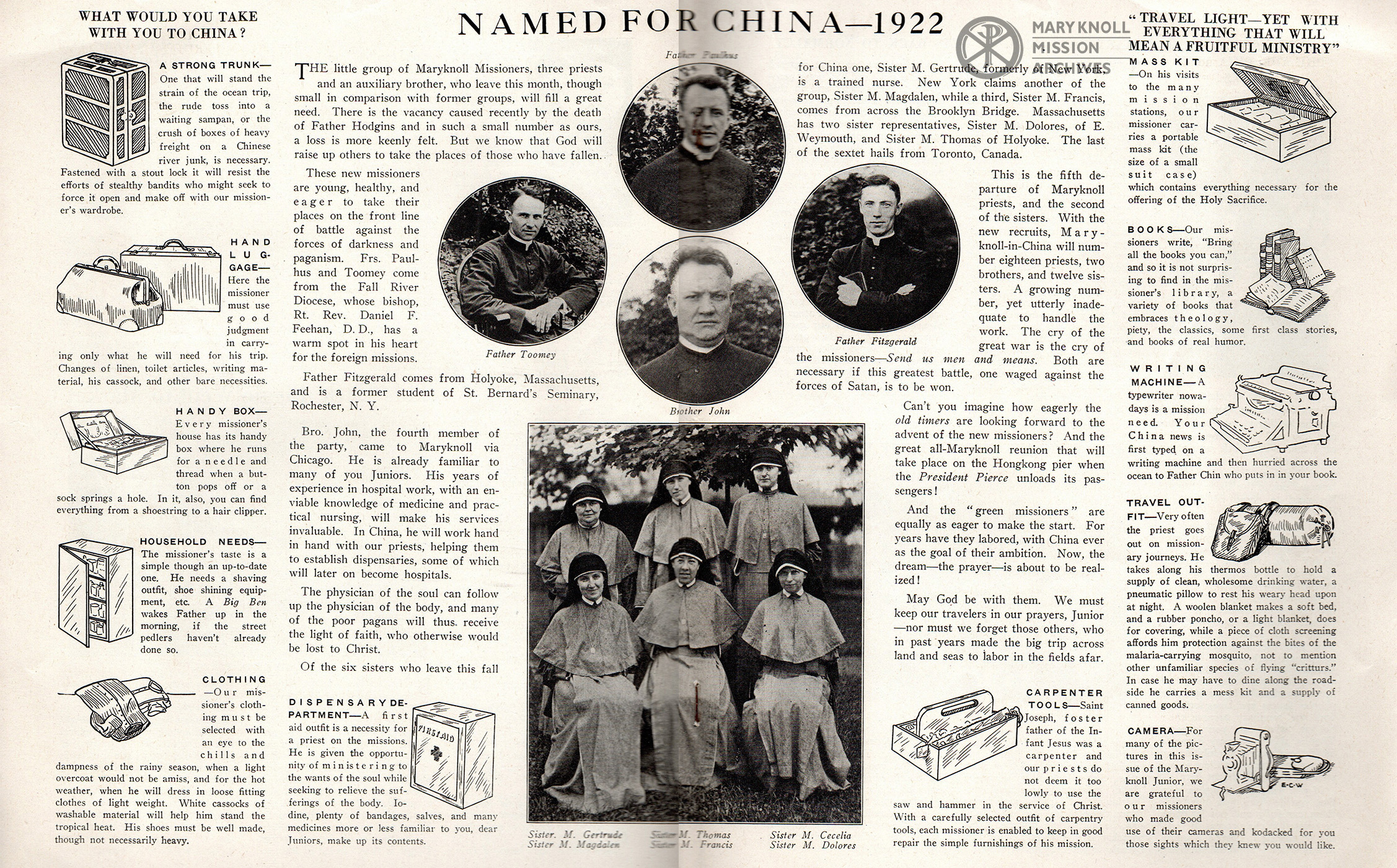 The next publication is Maryknoll Pioneers, which was a bulletin for university, college and high school students who were likely to appreciate Maryknoll’s ideals.  This four volume serial ran from 1938 to 1941.  Here is a cover from the December 1939 issue (Vol. III, No. 3) that shows a Maryknoller in Manchuria with text that invites readers to join in the mission of the church. 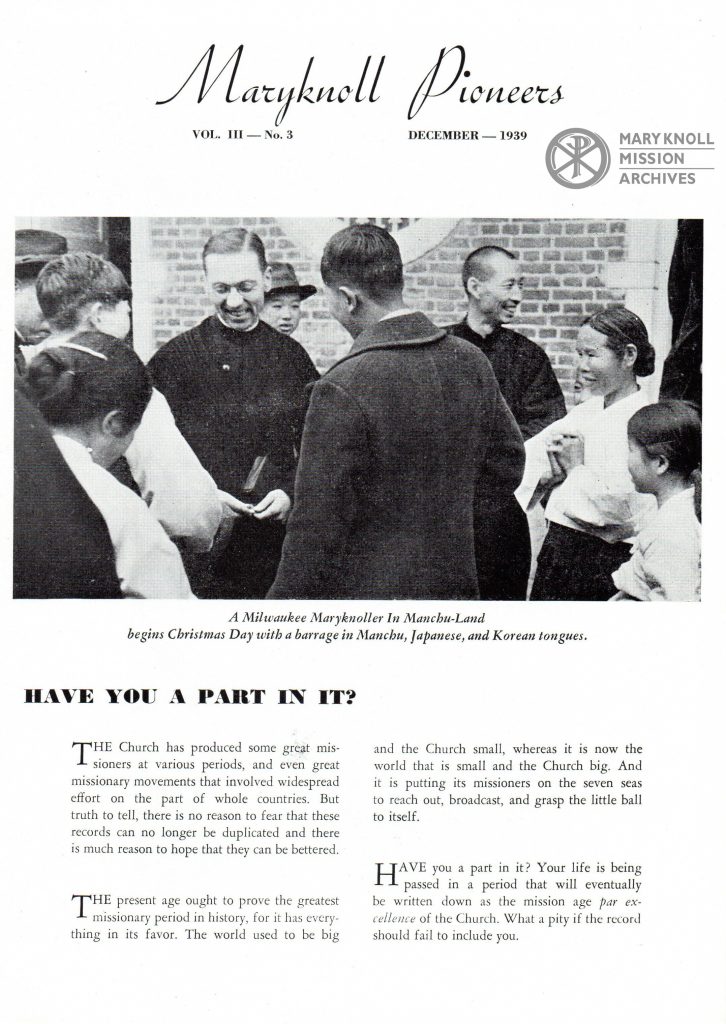 The third example comes from the 1970s with Share – Maryknoll Junior Edition. This was a magazine for, by and about youth who wanted to build a better world.  Content included guest editorials written by children, letters to and responses from Maryknoll missioners about their work and the counties in which they served, a pen pal club, and suggested do-it-yourself projects to build a better planet.  This four volume set ran from 1971-1975. 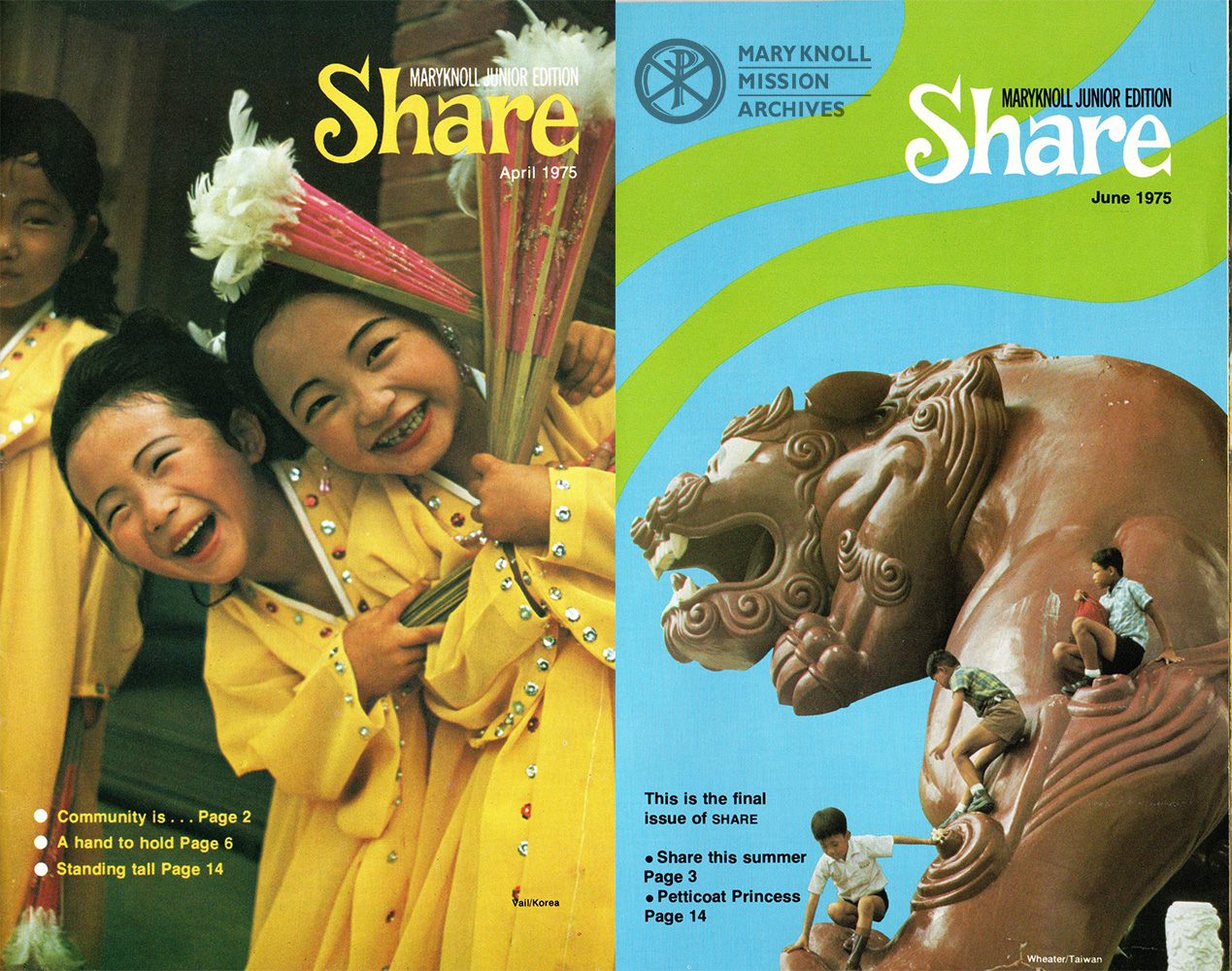 The issues came with a Teacher’s Guide and the June 1975 edition began with the following:

This is the final issue of Share.  The entire staff of Share wishes to thank you for your support and encouragement during Share’s four-year-life.  The letters we have received from Share’s young readers have been gratifying.  Their mission awareness, their concerns for their sisters and brothers throughout the world, their desire to make the world a better place in which to live – all of these expressions and more – give us reason to believe Share fulfilled the purposes for which it was published.

Next up is World Parish, Maryknoll’s World Apostolate Bulletin that presented material that provided theological reflection on issues from the Third World that affected the entire Church. World Parish was for clergy, religious, and lay apostolic workers for use in their distinctive ministries.  It ran from 1962 to 1999.  This selected issue is from the March/April 1996 issue (Volume 37, Number 394) and features Fr. Michael Bassano, a Maryknoll priest, who at the time was part of Maryknoll’s Associate Priest and Brothers Program. 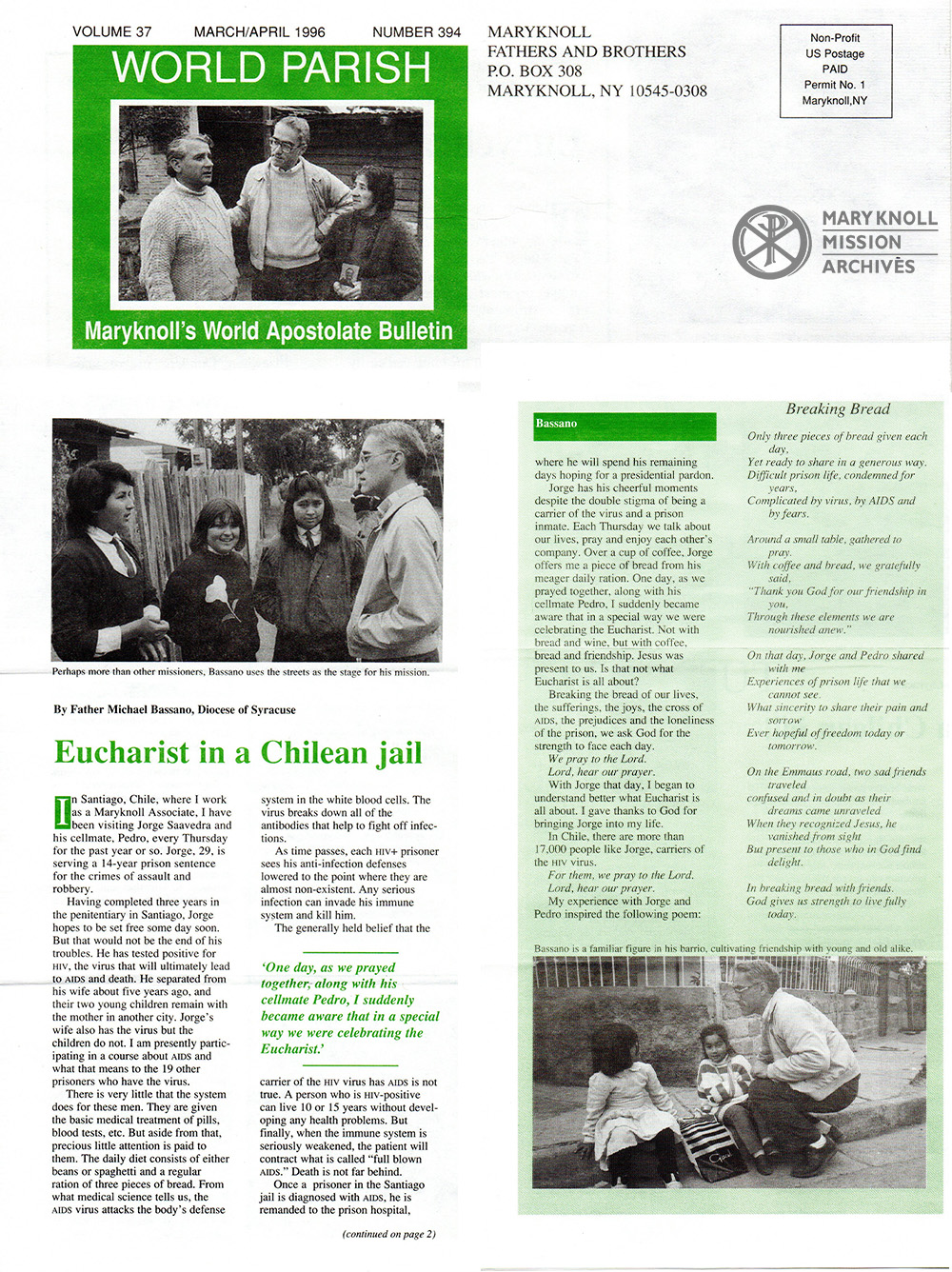 The last example is from World Student.  Begun in 1958, it was a magazine published by the Maryknoll International Student Committee to provide visiting international students a place to share the ideals and insights of their culture with the people of their host country. 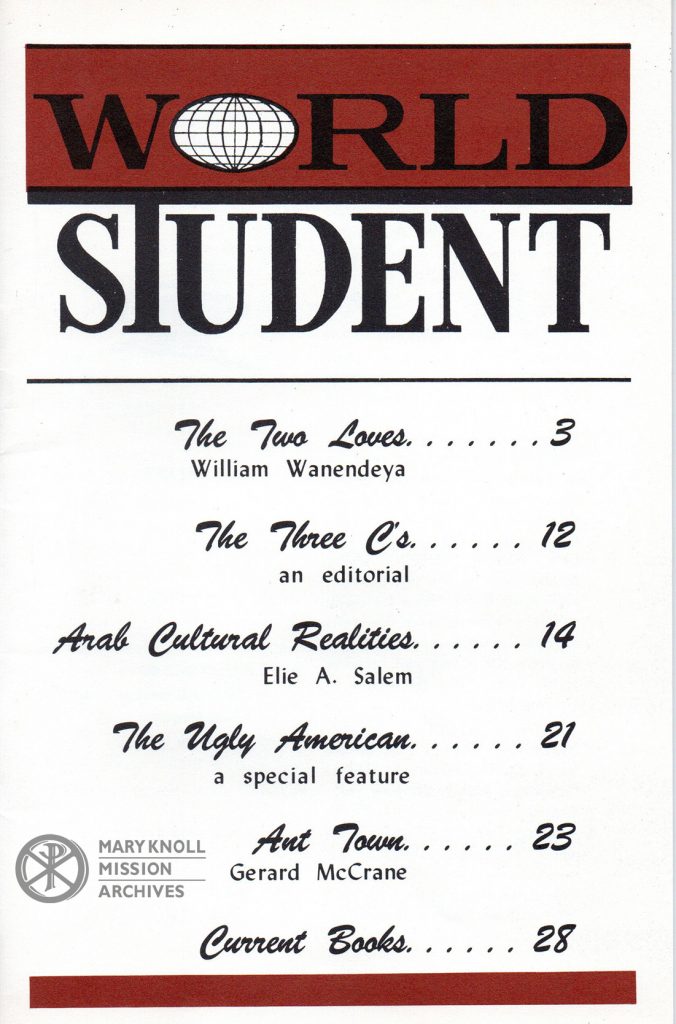 “The first one’s the hardest!”  If that is so, World Student has many pleasant years to which it can look forward.  A year ago World Student was only a baby crying for attention.  Today, it is still an infant, but it is able to toddle along on its own legs toward the future.

The response to the World Student idea has been the most heartening.  We must admit that we began the publication with some trepidation.  There were some who told us the American Student Community would be either unwilling or too immature to participate in a religio-cultural dialogue within the international community.  Others doubted whether the visiting students would be disposed to write for such a publication.

The passing of our first year of publication has strengthened our conviction that such a dialogue is not only possible, it is vitally necessary if the world of tomorrow is to receive the positive formation that the student community can give.