Oregon Trail, South of the Border

As a child, playing the Oregon Trail computer game and pretending to be a pioneer was a great way to spend an afternoon. For a 20th-century kid, seeing examples of the pioneer experience made its history more real. Reading the tales of the first Maryknollers in Mexico felt very much like reading a play-by-play of the Oregon Trail game. The Fathers wrote records of their journeys to the missions in the Yucatan penninsula, and from their entries, you get the feeling that the Maryknollers were living out a choose-your-own-adventure story. I hope you enjoy some of their reflections on the journey to one of Maryknoll’s first missions south of the border.

February 2, 1943 “Then comes Fr. Drought’s letter giving the green-light. It’s time to be off for the unknown and mysterious jungle-mission of Quintana Roo.”

February 7, 1943 “About noon we crawl into the station of Mexico City. The three intrepid but frightened-looking Knollers await me, and I am so glad to see them that the Spanish customary greeting of a back-patting embrace is quite natural.”

February 10, 1943 “The big building labeled ‘Gobernacion’ becomes our 2nd home, and we learn what is meant by ‘mañana’. The seller of one of the hundreds of official stamps is a particular difficult quarry…We thought we had him at 11 only to find that he had gone out for coffee; we waited until 1pm and then learned that he would not come back to his office until after siesta, or perhaps tomorrow.”

February 14, 1943 “The cabbies [in Mexico City] must all be ex-rodeo riders. For a peso they will give you a cross-town trip that beats any roller-coaster for thrills. The first screech of brakes, and ‘tick’ of a near-miss on the fender, puts one down deep in the back seat. From then on, one only knows when the outskirts are reached by the sound of hitting fewer people and things.”

February 16, 1943 “We think that every day will see the end of getting signatures and stamps. We are anxious to be off – Quintana Roo is calling, and Fathers Martin and O’Rourke are as eager to see Tepic.”

March 9, 1943 “The first five days of our search for a suitable house to rent here in Merida were fruitless. Then Divine Providence stepped in very dramatically: a fine Catholic family of the city decided that they were going to have us, and so now we are ‘had’.” 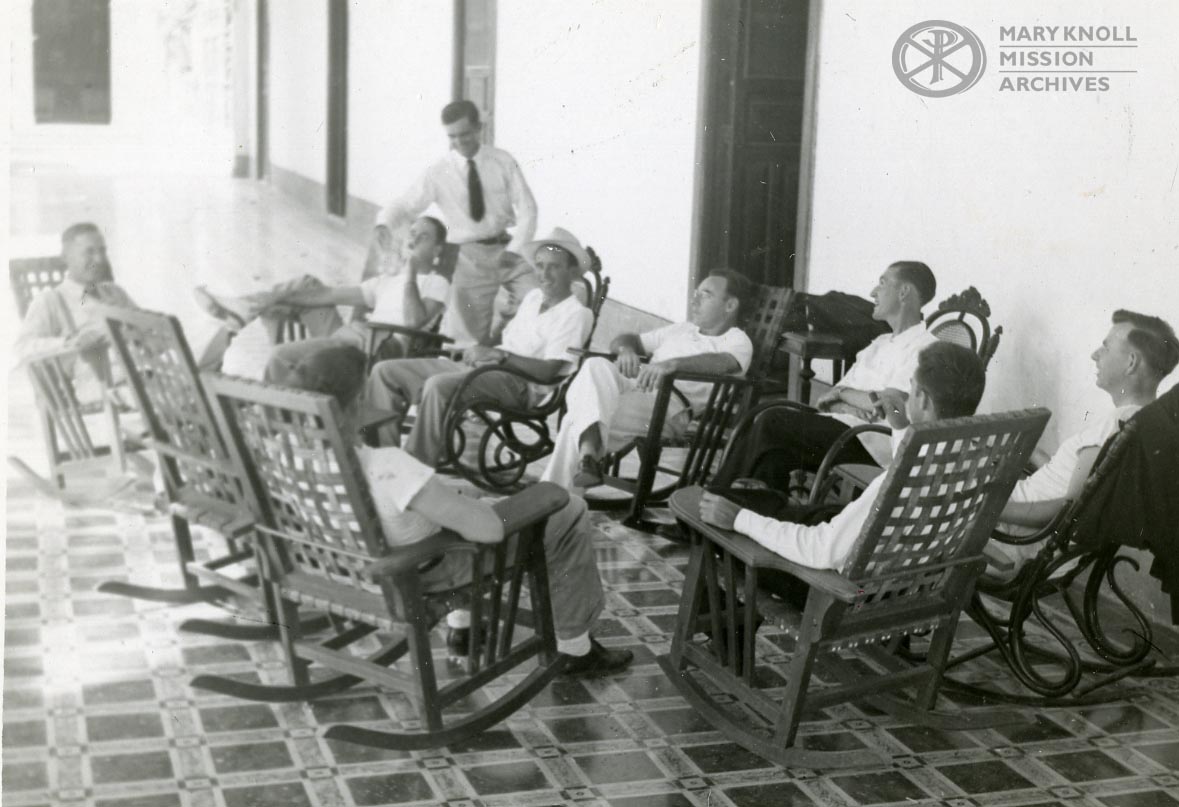 Maryknollers and friends take a break in Mexico City

After several months of language study, the Maryknoll pioneers began their missionary activity, working their way toward permanent missions in Carrillo Puerto, Cozumel, and Chetumal.

June 26, 1943 “On alternate week-ends we have been taking turns, in twos, going out to several Indian villages about two and a half hour’s ride [from Merida] on that railroad to Valladolid which you must remember, thence by mule cart through the hemp plantations…It’s meant to be a bit of practise for our future labors, and all the priests are enthusiastic…”.

December 27, 1943 “I am happy to be able to write that on the feast of St. Francis Xavier the immediate goal to which we have been working this past year was attained: the first Maryknoll Mission in Mexico was begun, in Carrillo Puerto. On the vigil of the Immaculate Conception, the second was opened, in Cozumel.”

January 28, 1944 “[The Bishop of Campeche] accepted our offer of one priest to serve as curate in Chetumal for one year. Accordingly, Fr. George Hogan has been named to that post, and will leave on February 4th.”