Sister Mary Driscoll – A Missioner to the United States 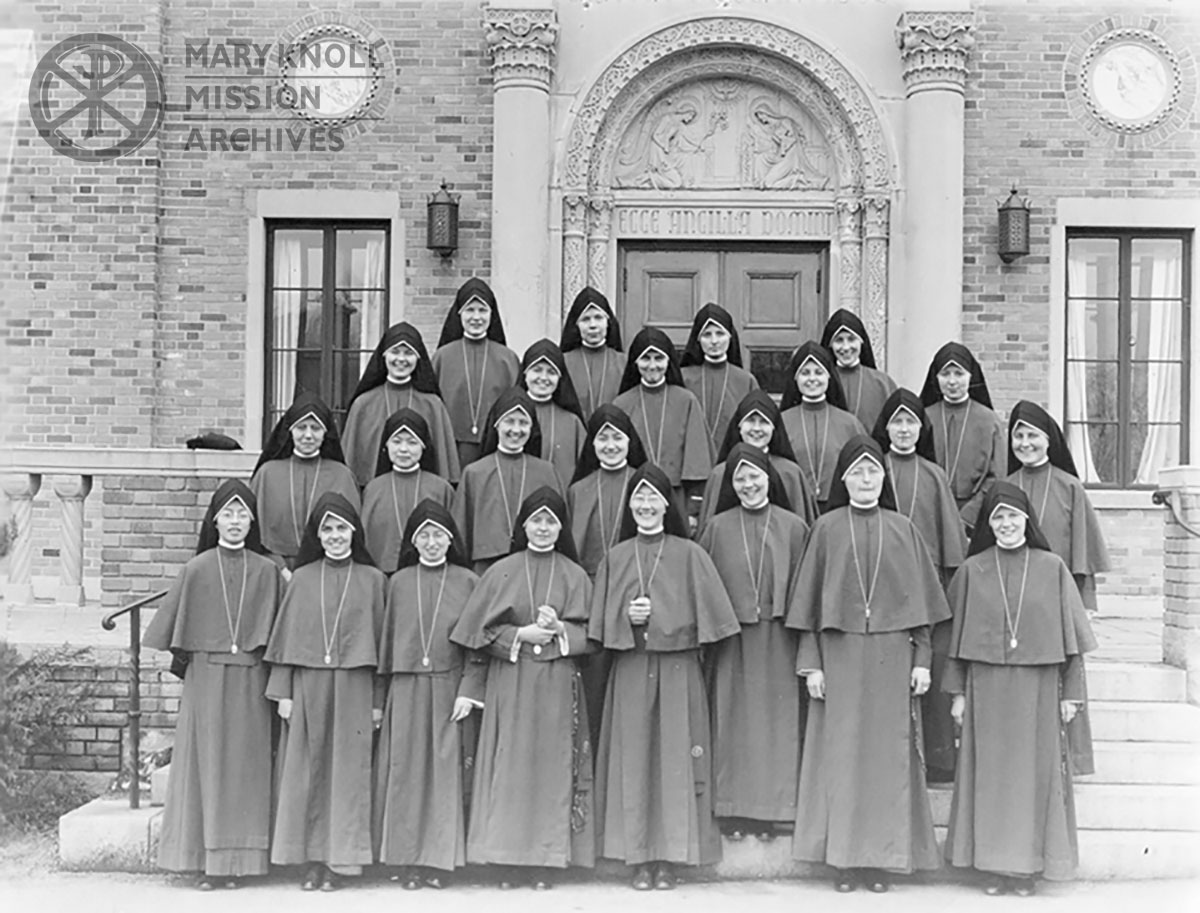 In last month’s blog I had chosen a random ordination class photo and picked a newly ordained Maryknoll priest and dug into what became of him.  I decided to do this again, this time following a Maryknoll Sister.  With the photo of the Profession group of 1946 in hand, I wanted, once more, to choose a young Sister and see what her life would become.  Where in the world would she end up missioned?  Would she become a nurse, a teacher, a social worker?  From the 1946 group I chose Sister Mary Driscoll (then known as Sr. M. Edmund Damien).  Let’s see what became of her…

Sister Mary Driscoll entered Maryknoll on September 7, 1943 and received the religious name of Sister M. Edmund Damien (after Vatican II she again went by her birth name of Mary, as many Sisters chose to do).  She made her first profession of vows on March 7, 1946 and soon after, received her first mission assignment to Hawaii.  She began her mission career as a teacher, teaching at St. Anthony’s in Wailuku, Maui until 1948.  She was then transferred to the Maryknoll School in Punahou on the island of Oahu, where she taught for another six years. 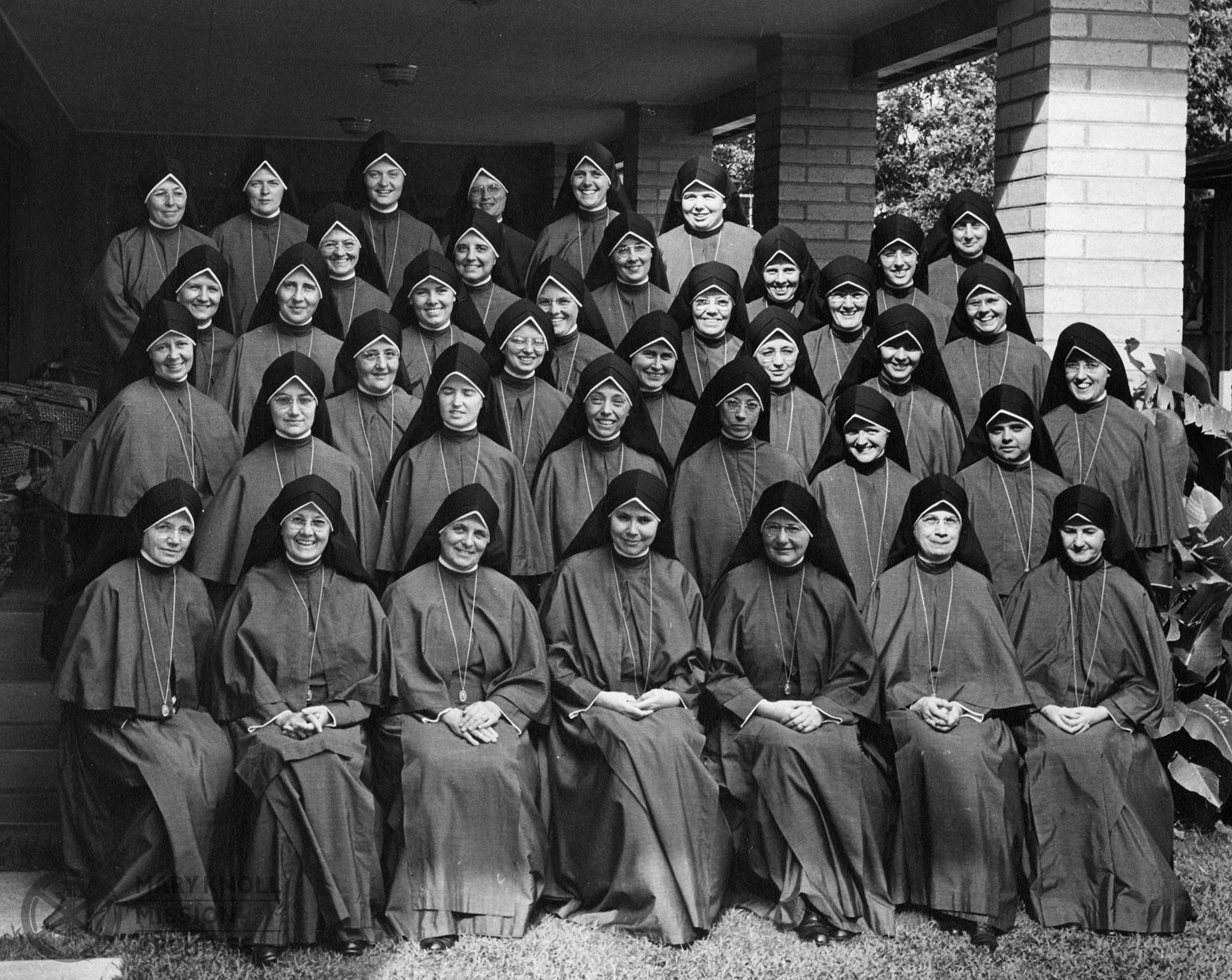 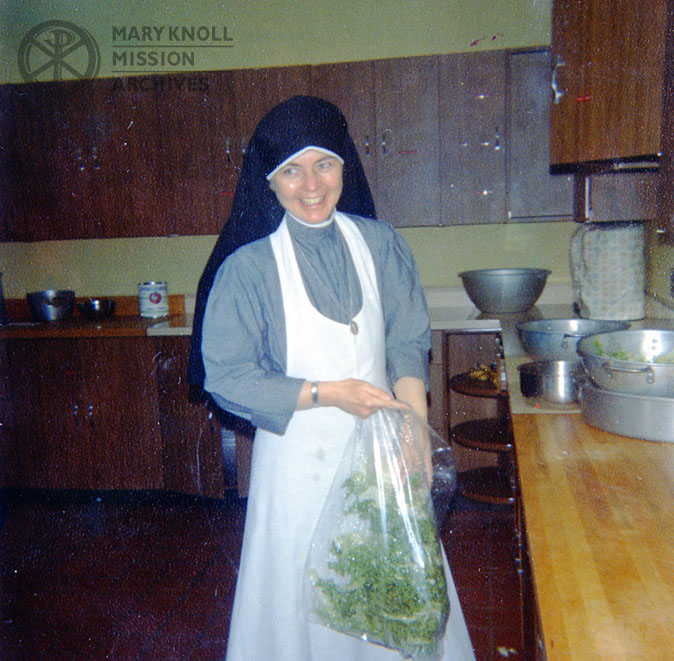 Sister Mary was then brought back to the mainland United States where she would remain for the rest of her life.  In 1955 she was assigned to the Transfiguration parish school in Chinatown, New York City, where she was a teacher and an assistant principal.  Her first non-teaching assignment was given in 1958 when she was assigned to work as the Assistant Novice Mistress at the Sisters’ Novitiate at Maryknoll.  She was then re-assigned to the Ladycrest Novitiate in Topsfield, Massachusetts, where she was appointed the Novice Mistress.

Sister Mary’s early mission life was varied both in duties and in location.  However, starting in 1968, she began the next phase in her mission wherein she focused on two underserved communities, right here in the United States.  1968 brought Sister Mary to the west coast, specifically in Escalon, California.  For thirteen years Sister Mary served as a special education teacher at El Portal.  She had this to say on her work in special education (taken from the Escalon Times, July 26, 1978):

“We call these children ‘special’ and I feel in singles them out as different in a way that isn’t always complimentary.  Wouldn’t it be ideal if all youngsters could be considered special, as they certainly are? – and if each one’s program could be geared to his needs?  As it is now, only in a ‘special’ class, because it is small, is it possible to have a program adapted for each one.  If Education had more money, and teachers had fewer students, perhaps ‘special’ programs could be for each.  That’s a dream, isn’t it?…Whatever the segregation, it [the term ‘special’] is an artificial barrier that separates people.  Children in a special class do like being in an environment that allows them to succeed, but they also do not like being in any way out of the mainstream of school life.”

By all accounts, Sister Mary was an excellent teacher, so much so that she received the Outstanding Teacher Award in 1981 from her school district.  At the ceremony, the superintendent of schools had this to say of Sister Mary:

“[A]n expert diagnostician she has had insight into the total child and his welfare, and she has brought to the classroom a compassion and understanding spirit that immediately says to the child ‘I care about you.’ She was a master at working effectively and tirelessly with parents and a stabilizing factor among the staff with whom she was associated.  I know of no one who does not have the highest respect for her as a teacher and as a wonderful, warm human being who has given unstintingly of her time and effort in our community.” 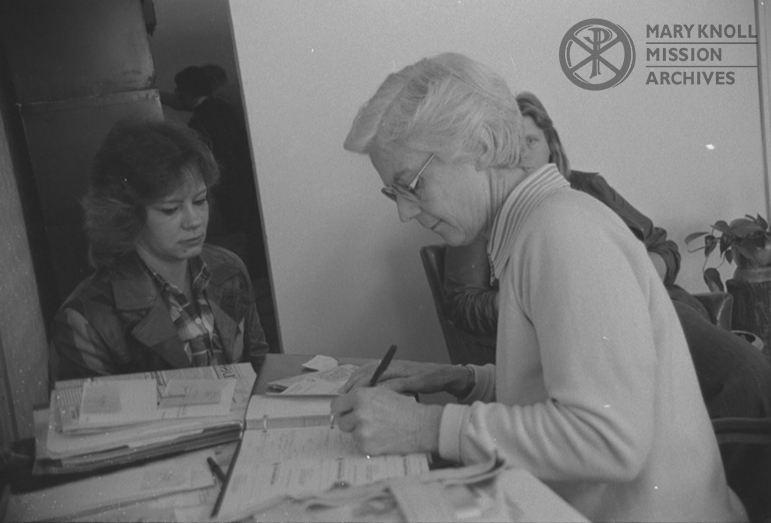 After leaving her mission in California, Sister Mary was assigned back to the east coast – to Kentucky, where she spent the remainder of her mission life.  In 1981, Sister Mary began to work for “The Sister Visitor” in Louisville, a project begun by the Sisters of Charity of Nazareth.  One aspect of this work was operating a storefront that provided necessities to the underprivileged in the area.  According to Sister Mary, “People come because they need food, can’t meet their rent, utility bills, need a prescription, corrective shoes, glasses, clothes, transportation…The clothes are sized, sorted, arranged nicely, and those coming are cared for with much respect and concern…It is sad in a land of wealth and plenty that so many can be skimping along not really able to meet each day’s challenge for the barest necessities, even though trying as hard as they can.  The number of people coming is growing.  I am glad that we can invite them into cozy surroundings and we do what we can for them.”

A second aspect of this mission was working with the elderly.  Sister Mary noted that “[w]e have many elderly in our area of concern…We visit some elderly regularly, collect their food stamps for them, take them shopping monthly in our large van.  That is quite a gala event, with everyone dressed in their Sunday best for the two hours in a big super market.  For some, it’s the only outing of the month.”

Sister Mary had her hands in many organizations throughout the duration of her time in Kentucky.  She was a teacher at the Creative Education Center in Bardstown.  The Center served children who needed specialized programming, including those who were very bright and weren’t having their needs met, others whose struggles with low self-esteem had caused them to drop out of school, and others who needed different programs to assist them in learning.  Once again, her excellent teaching skills were recognized and she was awarded with a Teacher of the Year Award in 1997.  The head of the school said of Sister Mary, “Wherever help is needed, there you will find Sister Mary, whether it is learning to read, or learning how to clean, whether it is ‘volunteering’ for something that needs to be done or organizing parent volunteers.” 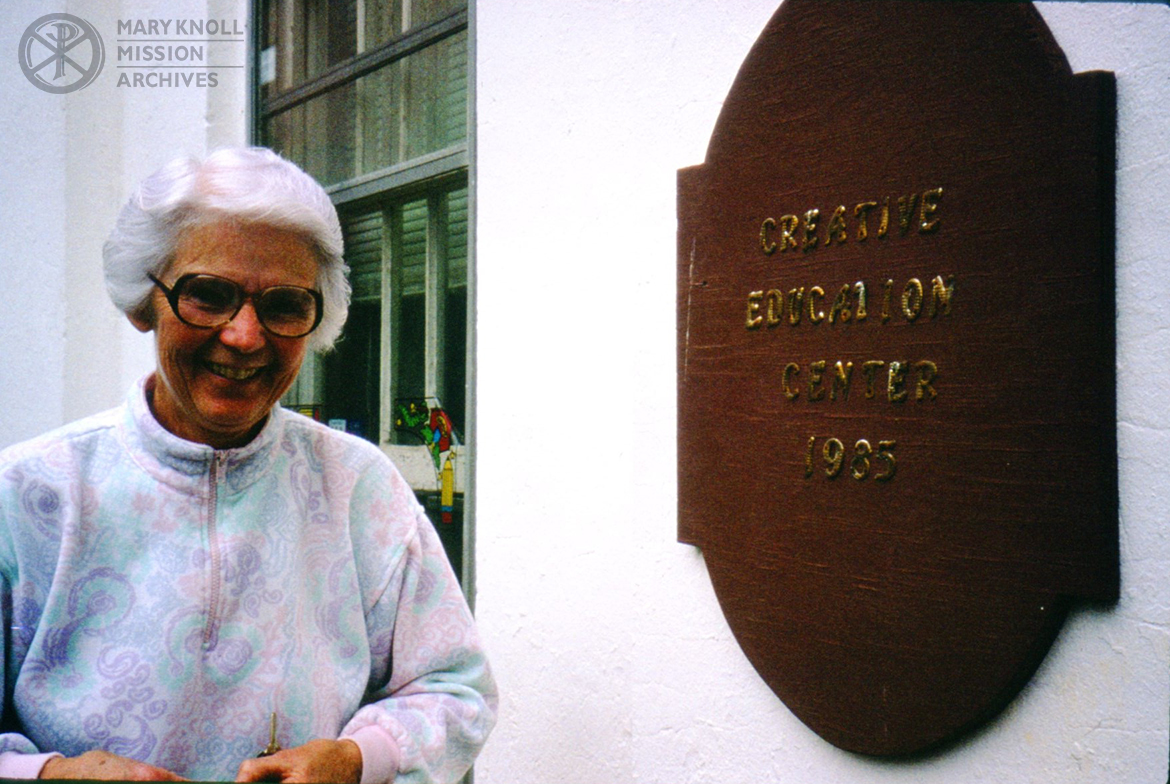 After she retired from teaching, Sister Mary began volunteering with Nelson County Court Appointed Special Advocates, an agency that finds volunteers to stand up in court as advocates for abused or neglected children.  She joined the Board of Directors in 1998, and later served as the President.  She continued to serve the local people in, doing pastoral work at St. Monica Parish in Bardstown. 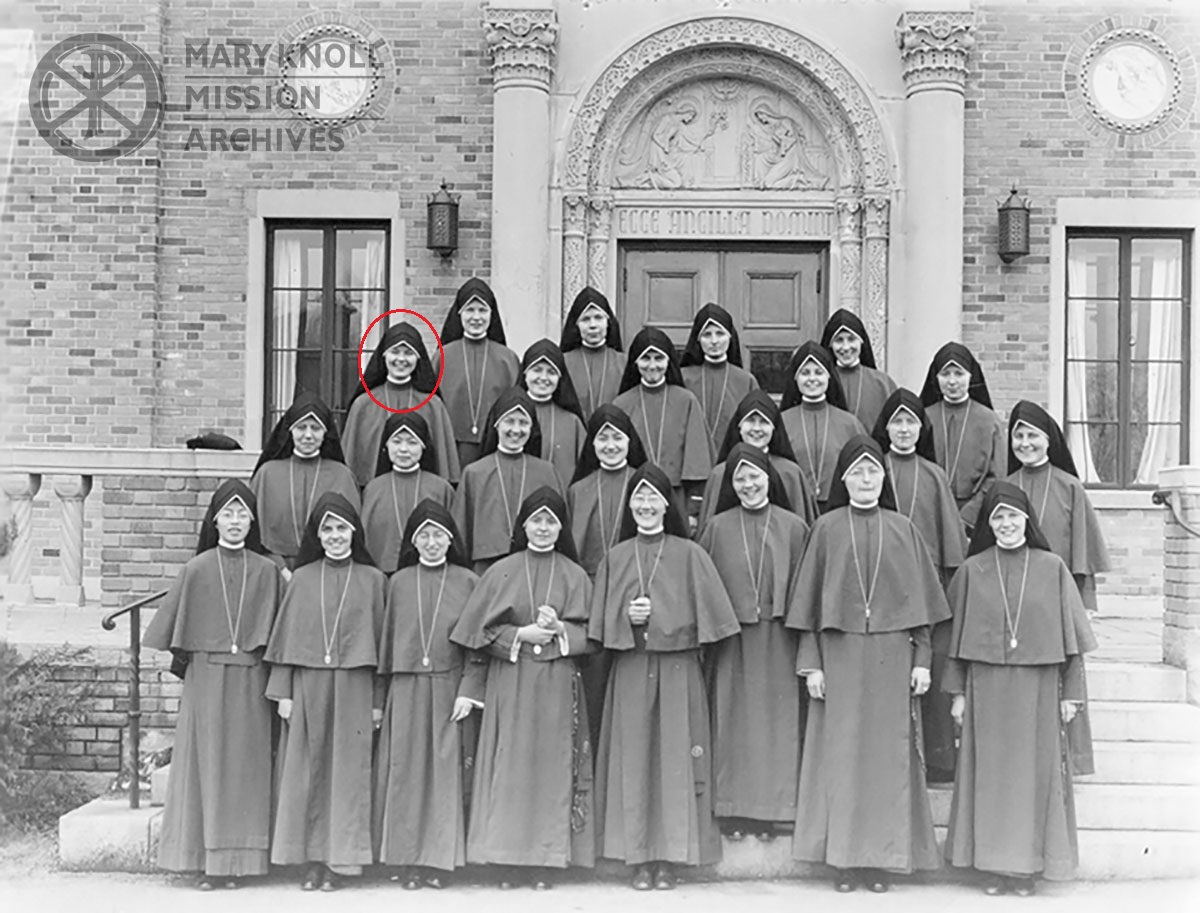 Going back to that original photo of the recently professed Sister Mary, it’s amazing to know all of what she would accomplish.  I wonder if she had any inkling into what her life would become.  Though she never experienced an overseas mission assignment, she used her talents to help those less fortunate in her own country.  She left a legacy I hope she would have been proud of.